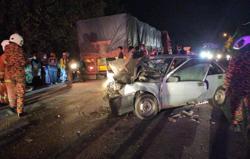 A woman is escorted by officials before receiving 100 whippings by religious police as punishment for pre-marital sex, outside a mosque in Jantho, Aceh province on June 5. A couple in Indonesia's conservative Aceh was publicly flogged 100 times each on June 5 after they were caught having pre-marital sex, as one pleaded for an end to the painful punishment. Aceh is the only region in Muslim-majority Indonesia to impose Islamic law, which allows whipping for a range of charges. - AFP

ACEH BESAR (AFP): Two Indonesians caught having pre-marital sex were flogged a hundred times each on Friday in conservative Aceh province with a fraction of the usual crowd watching, due in part to Covid-19 (coronavirus) fears, officials confirmed on Saturday (June 6).

Aceh is the only region in Muslim-majority Indonesia to impose Islamic law, which allows whipping for charges including gambling, adultery, drinking alcohol, and gay sex.

Local officials have continued the practice despite bans on mass gatherings during the coronavirus pandemic, insisting they have taken adequate safety measures to prevent infections.

On Friday, the couple had their temperatures checked and wore face masks as they were lashed with a rattan cane outside a mosque on the western tip of Sumatra.

The man's flogging was briefly paused because he couldn't bear the pain, while a second flogger had to be pressed into service to finish the heavy lashing of his female partner.

Another man caught in a hotel room with a woman was also whipped 40 times but his underaged female partner was spared.

Dozens watched Friday's flogging, a spectacle criticised by rights groups but which regularly attracted hundreds before the pandemic. 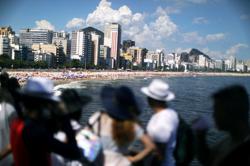