Police officers detain people during a protest against Covid-19 curbs at the site of a candlelight vigil for victims of the Urumqi fire, in Shanghai on Nov 27, 2022. - Reuters

BEIJING (AFP): Chinese police have deployed sophisticated surveillance tools in a push to stamp out a nationwide wave of unrest, using facial recognition software and location data to track down and detain protesters.

Frustration over prolonged Covid restrictions has boiled over, triggering protests demanding an end to lockdowns and greater political freedoms at a scale unseen in decades.

As Beijing announced a crackdown against the protests, its vast security apparatus swung into gear, using state-of-the-art surveillance to track down activists, according to a human rights lawyer offering free legal advice to protesters.

"In Beijing, Shanghai and Guangzhou, police have seemingly used very high-tech methods," said Wang Shengsheng, a lawyer based in the city of Zhengzhou.

"In other cities, it seems like they have relied on surveillance footage and facial recognition," she told AFP.

Beijing police may have used phone location data either captured from on-site scanners or Covid health codes scanned by people taking taxis to areas where protests took place, she said.

"Many callers from Beijing were confused as to why they were contacted by police when they genuinely just walked past the protest site and didn't take part," she added.

"We have no idea how exactly they did this."

Wang has received over 20 calls in recent days from protesters or people whose friends and relatives have been detained. Most detentions she was told about lasted under 24 hours.

Protesters who contacted Wang for help have been targeted too, she said.

In Shanghai, police have confiscated the phones of all those she was in touch with and who were summoned for questioning, "perhaps to extract all their data", she added.

Callers from Guangdong told Wang that their accounts on the encrypted Telegram messaging app were hacked after they registered ID documents with police en route to a protest.

Some friends of detained Beijing protesters also told her they saw their friends' Telegram accounts active while they were in custody, suggesting police may have been accessing them.

Encrypted protesters' chat groups -- only accessible in China with illegal VPN software -- are on high alert for police infiltrators as news spreads of further arrests and intimidation.

Participants have been urging each other to wipe all evidence of the protests -- including chat histories, videos and photos -- from their phones in anticipation of police checks.

One Beijing resident told AFP that two friends who attended protests in Shanghai and Beijing were detained on Sunday and Tuesday respectively.

The Shanghai protester was released on Monday evening but their phone remains in police hands, he said, asking to remain anonymous for safety reasons.

"Phone and social media sweeps are likely ongoing in physical spaces and virtual communities," said Rui Zhong, a China analyst at the Wilson Center in Washington.

One protester told AFP that she and five friends were called by local police after they attended Sunday's rally at a riverbank in the city's embassy district.

She later told AFP she was summoned to the police station Tuesday to write a declaration of what happened, but got turned away after not having a recent Covid test result.

Encrypted chat group users are sharing tips and legal advice on what to do in case they are interrogated, arrested or have their phones confiscated by police.

In Shanghai, an AFP reporter witnessed multiple arrests and confirmed that police had forcibly checked one protester's phone for foreign social media apps blocked in China which have been used to spread information about the protests.

"What's the right to privacy? You don't have any privacy," a police officer said to a 17-year-old Shanghai protester during a Monday altercation, according to an audio recording he provided.

"When people go missing or are killed in ordinary criminal cases, we don't see such high-tech tracking technologies," said Wang.

"But in public protests, we appear to see sophisticated digital technologies being used."

"I feel very sad, because we have such effective technology but it's being used in the wrong place."

"If our phones can be seized and manipulated at will, if our accounts can be logged onto (without our consent), what freedom do we have left?" 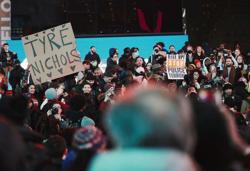