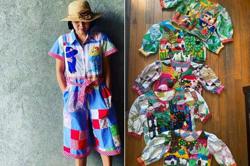 During a visit by reporters this week to mark the 15th anniversary of the Golden Triangle Special Economic Zone, the Director of General Office, Administration Board of GTSEZ, Xiong Jiantian, said that over the past 15 years the Zone has been continuously developing and there are plans to develop it into a prosperous and modern city.

So far, 1,000 hectares have been developed by over 500 investment companies, Xiong said.

The development goals of GTSEZ are three-fold. The first step is to build infrastructure, the second step is to attract investors to the area, and the third step is to build shops, restaurants and entertainment venues as well as supporting local people’s participation in agricultural production, he added.

A large number of buildings have been constructed in the Zone, as well as roads, an airport and other facilities to attract more visitors to the area.

The GTSEZ is also supporting local communities by building temples, schools and other essentials.

The Golden Triangle Special Economic Zone was established in 2007 by the Kings Romans Group, also known as Dok Ngiew Kham in Lao and Golden Kapok in Chinese, from China and the Lao government.

The Zone covered over 3,000 hectares under a 99-year land lease agreement. It was agreed that it would be developed into new urban centre and tourism hub, while protecting the environment and enhancing trading activities along the borders of Laos, Thailand, Myanmar and China.

It comes with investment projects such as economic infrastructure, agriculture, livestock, hotels, and a residential area.

The Zone is located in Tonpheung district, Bokeo province. It is located along the Mekong River in the Golden Triangle area where Laos, Myanmar and Thailand meet. It is also close to the Chinese border.

The Zone is strategically located in the Greater Mekong Subregion (GMS) on the North-South Economic Corridor through which the North is connected to Southern China (Yunnan province) by land via R3A Route and the South is connected to Laem Chabang Seaport in southern Thailand.