However, the garbage collector, who won the Miss Uncensored News 2015 pageant on Monday, will get to keep her crown, according to the Bangkok Post.

It said that organisers had dismissed speculation about stripping the winner of her title.

On the application form, it was written that Khanittha had passed Mathayom 6 (Level 12), a lie organisers only discovered when a university contacted them to offer the 17-year-old a scholarship.

In reality, she had only passed Mathayom 3.

The beauty queen was the talk of the town after it was reported that she helped her mother collect garbage for a living - a fact she is not shy about.

The teenager, who used to be a second-tier dancer to earn extra income, had vowed to help her mother when her schedule clears up as the work helped provide for her upbringing.

Kanittha reportedly lived with five other family members in a 4-by-5-metre shack, where her 47-year-old mother Orathai Pormaun also stored garbage for separation before sale.

She then moved to live with an aunt because of crowded conditions at home.

According to Orathai, her daughter had to leave school at 14 because the family ran out of money.

She was then adopted by “Know”, a salon owner who sent her to school until she completed Mathayom 3.

Know claimed that a committee member called to say that the prize money of 30,000 baht would be taken back because of the misinformation on Khanittha’s education background in the application.

But on Tuesday, it was reported by Bangkok Coconuts that the beauty queen begged the committee not to strip her of her crown through the media, as she had already passed on the prize money to her family.

Khanittha also apologised to contest organiser Somchai Leknoi on Thursday, stating that she had no intention of lying, having failed to check the application which was filled in by her uncle. 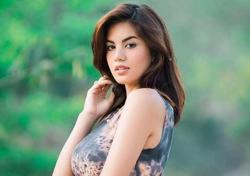