KUALA LUMPUR: PAS has made its most direct overture that it is ready to meet and work with the Barisan Nasional ruling Government.

Its president Datuk Seri Abdul Hadi Awang (pic), however, said the move was not towards forming a unity government as cooperation between the party and the Government had previously existed.

"This is not a start but a new approach that we are taking.

“We are willing to meet the ministers concerned and the Prime Minister towards resolving issues of the people,” Abdul Hadi told reporters at Parliament lobby on Tuesday.

He also said that the Islamist party is willing to work with any party, be it DAP or PKR, as long as it is for good.

"We will work together if the cooperation is for good but not if otherwise," he said.

Asked on his views of the newly formed Opposition pact of Pakatan Harapan between DAP, PKR and Parti Amanah Negara, Abdul Hadi said he had no hope for an alliance with them.

He likened Parti Harapan to an express bus travelling aimlessly without a proper destination.

He added that PAS is willing to go into the polls alone if the situation dictates.

"We have always stood alone as we have the branches and grassroots which other parties can rely on," he said.

Abdul Hadi cited the recent Bersih 4.0 rally as an example where a PAS pullout left the event lacking of Malay support. 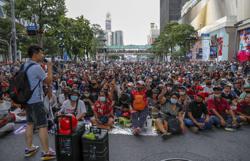 Ministers believed to be gathering at PM's house, say source