BUTTERWORTH: It was a sorrowful time for family members and friends of Bangkok blast victims Lee Tze Siang and his four-year-old daughter Jing Xuan as the two were given a final send-off.

It was a heartbreaking moment when Lee’s wife Neoh Ee Ling, 33, and their son Jian Han, six, were asked to look into the coffins for the last time.

Neoh, who is five months’ ­pregnant, kept a calm demeanour.

Lee and Jing Xuan were cremated at the Berapit Crematorium in Bukit Mertajam yesterday. 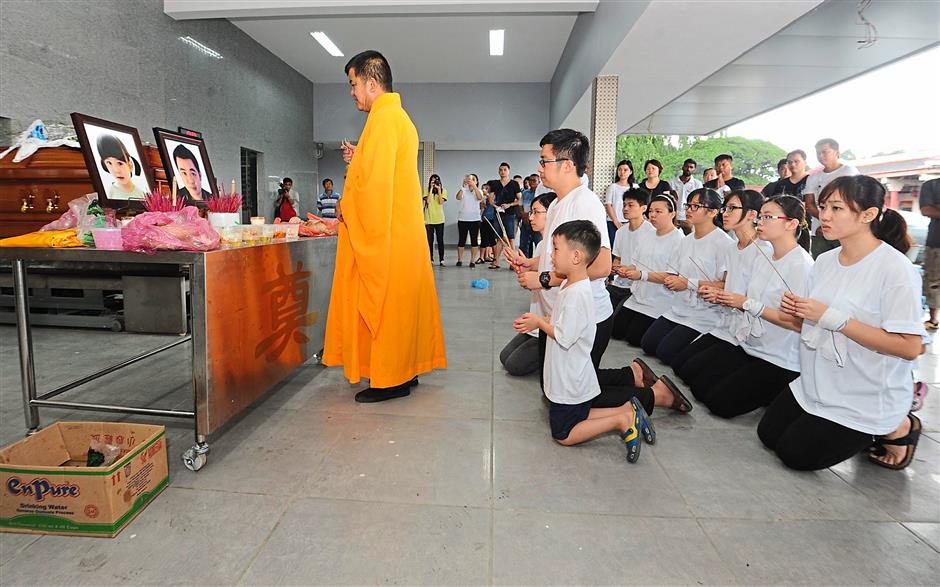 Rest in peace: Family and friends paying their last respects to ?Tze Siang, 35, and his daughter ?Jing Xuan, four, at the Berapit Crematorium in Bukit Mertajam?. — MUSTAFA AHMAD / The Star

The bodies of Saw Gek and Jai Jun will be buried at the Sungai Lembu Chinese cemetery in Bukit Mertajam.

Su See will be cremated at the same site tomorrow.

Lu, 24, a computer science student, told reporters during the wake yesterday that his mother was a happy-go-lucky person.

Lu, whose parents were divorced when he was five, said his mother was always surrounded by friends and relatives.

Lu flew to Bangkok the day after the blast and was told that his mother had not been found yet.

“We headed to the hospital. Upon arrival, it was total chaos there.

“It was difficult for us to get any confirmation about any questions we had,” Lu said.

“Later, hospital authorities told us that they found an arm, which they believed belonged to my ­mother.”

The relatives then looked through the pictures of the tragic family’s trip taken earlier on an aunt’s handphone.

They saw that Lu’s mother had painted her nails in a ­gold-silver shade.

“This matched the nail polish colour on the arm that was shown to us by the hospital authorities,” he said.

Further DNA tests later confirmed that the arm belonged to Su See, who was the eldest of five ­siblings.