BANGKOK: Thai police have raided and blocked access to 13 rooms at a condominium on Ratchadaphisek Road here owned by a Malaysian suspect involved in the controversial UFun investment scheme.

Suwira is leading the investigation into UFun, which faces allegations of running a pyramid scheme.

He said Kevin Lai, who owns the rooms and is under police custody, was the manager of UDBP Management (Thailand), which was promoted openly as a commercial bank but not registered as one with the Bank of Thailand.

The rooms had allegedly been used to host members of the UFun management and diplomats from Vanuatu, of which Lai is reportedly an honourable envoy since April 2014.

Suwira said Lai paid a salary to Vanuatu diplomats for conditions he did not specify.

Lai, who also held diplomatic status for the Micronesian country of Nauru in 2005 but was discharged from the post in 2011, continued misusing his diplomatic immunity for things such as importing luxury cars without paying taxes.

After receiving a notice from police about Lai’s fraudulent activities, the Foreign Ministry refused to accept Vanuatu government’s request to recognise him as a special envoy, Suwria said.

Meanwhile, three Thais and a Malaysian were arrested in Songkhla’s Padang Besar area for allegedly trying to smuggle Bt22.7mil (RM2.45mil) in cash withdrawn from the accounts of four UFun members into Malaysia. The four suspects were then flown back to Bangkok for a police press conference. 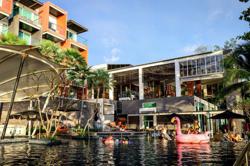