MIRI: The construction of the RM4bil Baram Dam in interior northern Sarawak will proceed following support from most of the community leaders for the project, Chief Minister Tan Sri Adenan Satem said.

The project is expected to drown an area of 34,000ha of forests, which is about half the size of Singapore and uproot at least 20,000 villagers.

“I have secured pledges from these community leaders that they will support the state government in the Baram Dam project. The majority of the Baram people want the project to start.

“The construction will begin as soon as possible,” he told a press conference after a closed door dialogue with representatives of the Baram Orang Ulu groups here yesterday.

Asked about the relocation of the affected people in 25 longhouses, Adenan said this would be dealt with in the best possible manner.

He said the state would follow internationally accepted procedures to resettle the affected residents after carrying out talks with them on the compensation and resettlement plans. 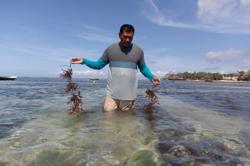