The post, which has been shared more than 1500 times, contains images allegedly taken by Instagram user “yengnasir” using aerial drones of Saudi Air and AirAsia flights approaching the KLIA runaway in Sepang.

It is unsure how far the drones were from the aircraft.

The Instagram account has since been deleted. It is also uncertain when the original photos were uploaded by the user.

Under the Department of Civil Aviation’s (DCA) 2008 regulations, there are prohibitions on using unmanned aerial vehicles (UAV) under 20kg in controlled airspace or within an aerodrome traffic zone, unless permission of air traffic control unit has been obtained. 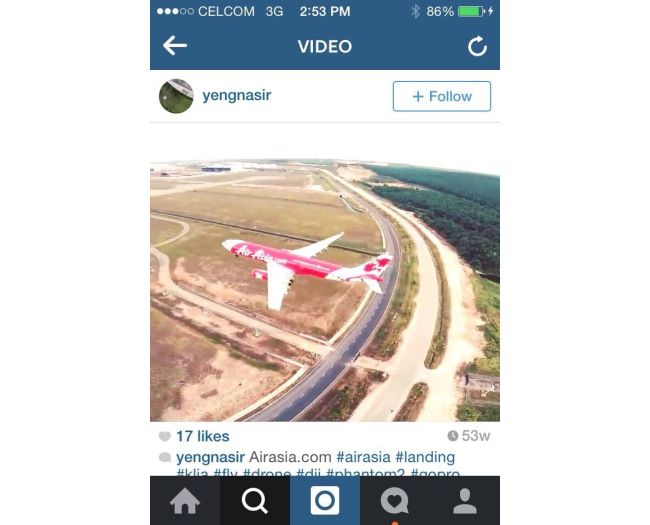 Drones have become popular here among photographers, with a reasonable drone for professional work available for about RM3000 although “cheaper drones” can be purchased for as little as RM500.

Last week, French media reported the sightings of drones close to sensitive sites in Paris such as the presidential palace and the US embassy.

Three Al-Jazeera journalists were questioned by French police for flying a drone in the Bois de Boulogne park on the western edge of Paris.

Unlicensed flights of any kind over Paris are illegal, with offenders liable to face a one-year prison sentence and a €75,000 (RM304,000) fine.

In Singapore, the Civil Aviation Authority does not allow unmanned airships to be flown within five km of an airport.

The DCA has said it will be issuing a statement on issue soon.