Speaking to TIME’s Adam Ferguson and David Stout recently, the 28 year-old strongly defended her fighting career against those who claim it as un-Islamic.

“Being a mixed martial artist and being a Muslim as well shouldn’t hinder what I want to do or with achieving my goals or my ambition.

“We don’t believe religion should stop us. Islam teaches us to work hard,” says Ann, who is signed with ONE Fighting Championship (ONE FC), a prominent MMA promoter in Asia.

MMA has been largely dominated by males since its inception in 1993, but an increase in female fighters, especially from the United States and Japan, has given a more prominent place for women in the sport.

“When I started fighting as an amateur, MMA in Malaysia had just started growing.

Ann agrees, however, that there is still some form of discrimination towards women in MMA and says she is going all out to prove that women can fight.

“Some people even say I should just stay in the kitchen. But I tend to ignore these people because I never let them get into my head.

“Like they say, haters gonna hate. You can’t just expect everyone to love you,” she said.

Despite blazing quite the trail since beginning to compete at the top level, Ann does not yet see herself as a role model.

“I don’t quite see myself as a role model yet. That’s a big thing.

“I just hope to inspire other women or even boys and girls to do what they want to do. Whatever you set your mind to, you can achieve as long as you put in the commitment and work hard,” she said.

Ann’s record since going professional is two wins and one loss, and she admits to still getting nervous before fights.

However, the best lesson she has learnt is to have the “right mindset before going to train or fight”.

“For instance, if you go train and all you think about is how you’re tired then your body starts breaking down and you won’t be able to train well.

“The same goes when you go into a fight. If you think you’re going to lose or if you believe the negative (things) people are saying is true then you’ll probably perform badly,” she says, adding that the right walk out song is important to having the right mentality.

For those who are wondering, her walkout song is “It’s My Time” by Fabolous featuring Jeremih.

“I think I was the first fighter to submit my song. I chose it because it’s my time to be here in Malaysia. And it’s my turn to win and represent Malaysia.”

TIME’s Next Generation Leader series, first launched in September, seeks to introduce young people from around the world who are working hard to make an impact on the world in their respective fields, ranging from business, science, activism to sports. 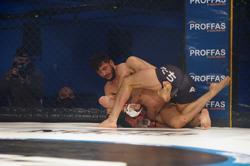