PETALING JAYA: The use of home-made bombs to commit crime is on the rise, and Do-It-Yourself (DIY) websites plus the easy availability of explosive components have been blamed for the spike in such cases.

Though the most recent deadly explosion in Bukit Bintang involved grenades, 39 home-made bomb cases were reported over the last two years, according to police records (See graphics below).

Criminologists and public interest groups are sounding the alarm and urging the authorities to act fast to check the problem, with some even calling for a ban on bomb-making websites.

A Google search for “homemade bombs with household items” netted 478,000 results in 0.31 seconds, covering everything from harmless smoke bombs to deadlier explosives.

The websites even offer step-by-step tutorials on how to extract chemicals like hydrogen peroxide and ammonium nitrate from the items for criminal use.

Universiti Sains Malaysia (USM) Assoc Prof of Criminology Dr P. Sundramoor­thy said all sorts of information on ex­­plosives could be found online, but admitted it was impossible to block the Internet. 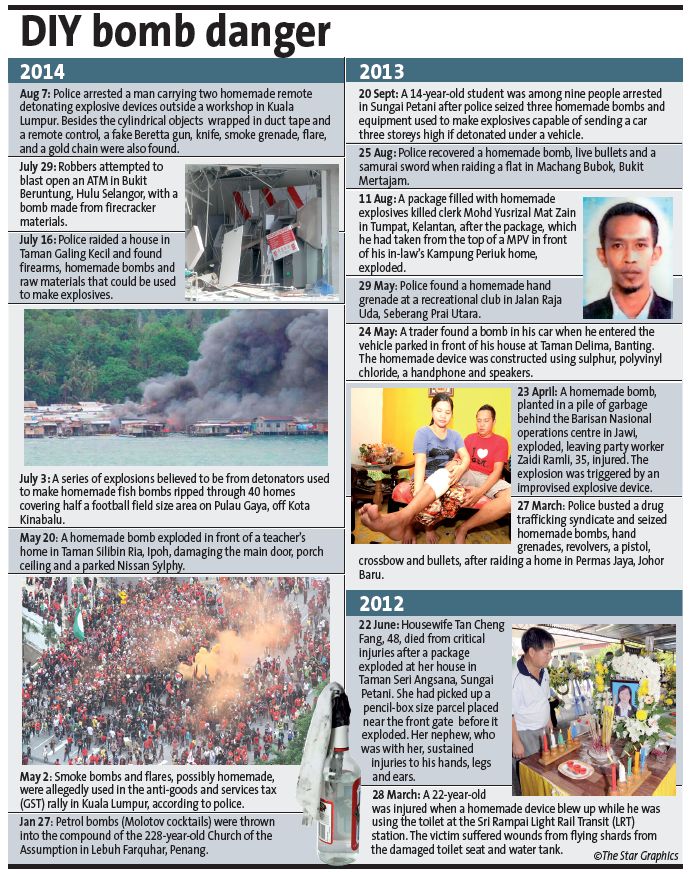 Another reason for the spike in such cases, he said, was the uncontrolled sale of dangerous components to make explosives and he urged police to step up intelligence work as such bombs were being used for criminal, terror and experimenting purposes.

“I once bought caustic soda for stripping furniture with no questions asked despite the chemical being a controlled item. Sellers must ensure that such purchases are properly documented so that the police can monitor what the chemicals are used for,” he said.

Safety activist Captain K. Bala said it was important to raise public awareness on the dangers of experimenting with making explosives.

“I have come across formulas that are wrong. Imagine the damage if someone tried it,” he said, adding that a campaign to highlight the laws and penalties for those found with explosives was crucial.

He said suppliers of dangerous chemicals and household items that contain them should be more vigilant and alert the police if customers buy large quantities of potentially flammable materials.

Another criminologist, Dr Geshina Ayu Mat Saat said criminals were driven by the satisfaction of exploding, destroying, or causing harm.

She said that most bombers were literate and did not openly exhibit aggressive behaviour.

“Except for the organised psychopath, they rarely act alone. They get on well with others and are known to be active in close-knit social groups.”

“We live in a troubled age. Previously, it was unimaginable, but now even from your home, you can make a bomb. The MCMC must do a comprehensive check to see how we can block sites that are harmful to the nation,” he said.

MCMC chairman Datuk Mohamed Shahril Mohamed Tarmizi, however, said banning or blocking such sites was a temporary measure as it would just lead to other similar ones mushrooming.

“The Internet contains a lot of things – the good, the bad, and the ugly. You can search for anything – including making bombs, and you will find it.

“Would it be feasible for any authority or government in the world to block or remove it?” he asked, adding that self-regulation was the best form of control as removing or banning content took time, was quite technical, and sometimes not possible.

He said only if netizens failed to regulate themselves would the Government be “forced” to step in.

Police on lookout for militant and bomb-making website surfers