Malaysians of all faiths and races gather to condemn Israel's actions

By M. KUMAR and AKIL YUNUS

KUALA LUMPUR: More than 5,000 Malaysians of various faiths and races braved the sweltering heat at Dataran Merdeka to show their support for Palestinians and condemn the violence in Gaza.

The gathering, organised by Viva Palestina Malaysian (VPM) and Aqsa Syarif and which began around 2pm, saw various celebrities and VIPs joining the masses.

Donned in both Malaysian and Palestinian colours, the crowd chanted anti-Israel slogans and listened to rousing speeches from speakers representing different NGOs.

Representative of the youth wing of the Council of Churches Malaysia (CCM) Desonny Tuzan said it was heartening to see Malaysians from different racial and religious backgrounds turn up for the event.

“We want to stress that the Palestinian-Israel conflict is not a struggle between Muslims and non-Muslims. It is a universal fight against the atrocities and genocide being committed in Gaza.”

He said Christians in Gaza had been assisting the victims by providing shelter and food since the siege began, and urged Malaysian Christians to contribute as well.

Day of outrage: Malaysians of all races rallying at Dataran Merdeka to support the Palestinians and condemn Israel’s actions in the Gaza Strip. — ART CHEN / The Star

“Our presence from the youth chapter of CCM is to show solidarity with the Palestinians, especially the women and children.”

Malaysian artiste Afdlin Shauki received chants of approval from the crowd as he took to the stage.

“We can only watch as innocent women and children are murdered. But do not think that we cannot do anything. We can boycott their products to show them the people’s power,” he said.

VPM volunteers read out a declaration urging the US government to stop supplying weapons and financial aid to Israel and for the Egyptian authorities to open the Rafah crossing to allow medical supplies and aid to reach the Palestinians.

“For Muslim Egypt, this is not just a humanitarian gesture but a religious duty,” said VPM member Dr Azhar Steven.

“We are here to stand in solidarity with our fellow humans in Gaza regardless of race or religion.

“The atrocities committed there must stop now,” said Ramli Yusoff, 45, who joined the rally with his family. 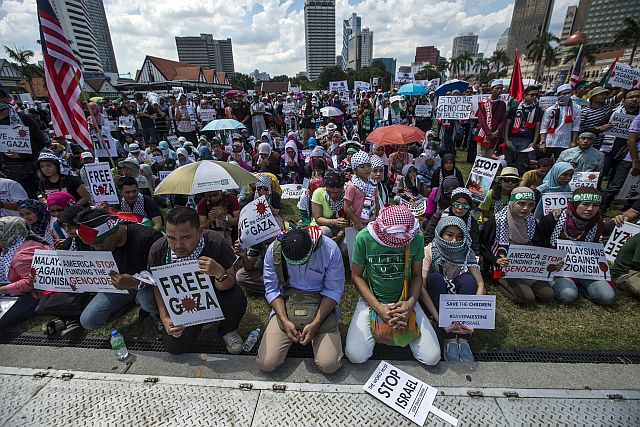