The 14-second video, which was uploaded on his Instagram account, showed other passengers stowing their luggage in the overhead compartment.

In the caption of the Instagram video, the 30-year-old seemed to have expressed his jitters flying home.

"Bismillah... #hatiadasikitgentar (In the name of God... feeling a little bit nervous)", read the caption. 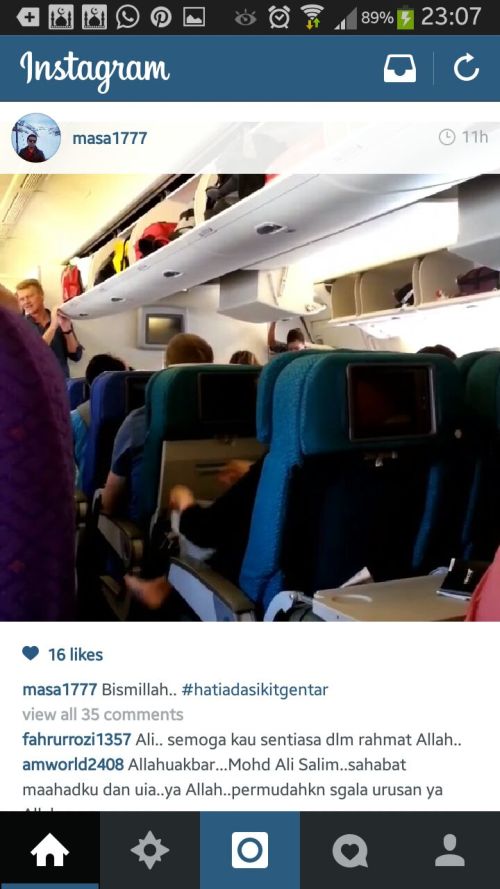 An announcement, believed to be the voice of the pilot, could be heard in the background. "At the moment, we are on the final stages of boarding and cargo loading. Once again, please ensure all your phones are off for the flight to..." said the pilot, before the video ended.

Md Ali, a psychology PhD student at Erasmus University Rotterdam, was reported to be heading home to celebrate the upcoming Hari Raya in Muar, Johor.

Flight MH17 disappeared from radar screens in eastern Ukraine at around 1415 GMT, hours after the Boeing 777, bound for Kuala Lumpur, had taken off from Amsterdam’s Schiphol airport.

It is believed to have been accidentally shot down 50km from the Ukraine-Russia border.

Malaysia Airlines, in a statement, confirmed that there were a total of 298 passengers including 15 crew members on board.

Among them were 43 Malaysians including the crew members and two infants.