Our blood cockles are dying. Can we stop the killing?

Selangor fishermen are no longer assured of bountiful cockle harvests. Sea pollution is to blame for the disappearing clams, they say.

In May 2012, fisherman Kahar Buntal had a shock when he hauled up his harvest of blood cockles from the sea – it was mostly empty shells. This happened throughout the entire season which spanned six months. “The yield for that year was low. We estimated that half of the harvest was dead,” recalls the 62-year-old from Bagan Sungai Buloh, a fishing settlement in Jeram, off Kuala Selangor.

“In past seasons, almost 90% of the harvest was healthy cockles. But that isn’t the case anymore these days. The dwindling population and slow growth rate are signs of deteriorating water quality in the cockles’ breeding environment. We couldn’t harvest anything last year because of the cockles’ delayed growth. It took one year and two months for them to reach the size that previously took just seven or eight months,” Kahar laments.

He started harvesting cockles in 2007 and is one of 20 licensed cockle collectors in Bagan Sungai Buloh. Alongside areas in Sekinchan and Bagan Nakhoda Omar, the 40ha site is part of the northern Selangor mudflats that harbour Peninsular Malaysia’s main cockle culture area.

Scientifically known as Anadara granosa, blood cockles feed a market demand that's reflective of the public’s voracious appetite for them, whether tossed in char kway teow or lightly blanched. What worries Kahar and other fishermen is that supply can no longer keep up with demand, based on his seasonal rakes that show declining numbers of clams and moderately high mortality.

“In the past, we could harvest at least 30 sacks of cockles weighing 68kg each in a day. Now our yields are halved to about 16 or 17 sacks. The situation went downhill in 2012 after pollution became really bad. Last year, the black water reeked, and my hands itched after coming into contact with the water,” says Kahar.

His son, Mohd Fadillah Kahar, 28, also a cockle collector, says even till today, the smell is especially nauseating during low tide. 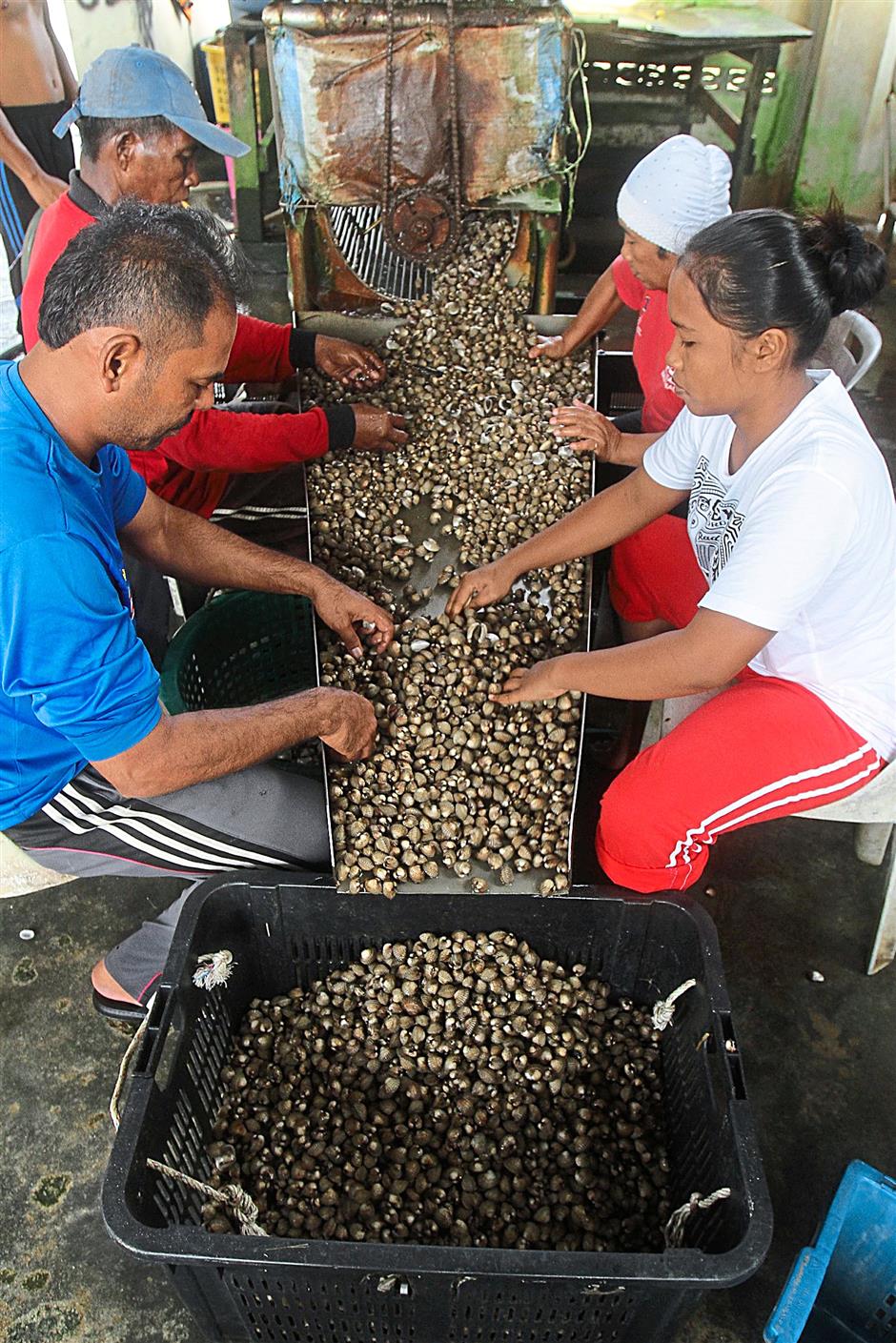 Wild cockles require a healthy environment to thrive, from the mangrove mudflats that's a source of rich nutrients to clean waters bereft of contaminants.

Universiti Putra Malaysia biologist Dr Ahmad Ismail, an expert in eco-toxicology, has been studying coastal pollution over the last 25 years using cockles as a bio-indicator for heavy metals pollution in the intertidal environment (the area between the low tide and high tide line). He says there's no monitoring or sampling being done right now on hazardous chemicals that might have accumulated in blood cockles, which could have affected their breeding and growth rate.

He explains that coastal wildlife such as migratory shore birds and small marine invertebrates such as snails and mussels are sensitive towards changes in their habitat. He believes the pollution comes from rivers since currents flow directly into the cockle beds, which are usually found on intertidal flats.

During a boat trip, the fishermen demonstrate their deft cockle harvesting skills using a steel cage tied to a long mangrove wood pole. A pedal is fitted to the pole for them to step on, which then thrusts the cage into the water to scoop up the clams. The fishermen can tell if the cage has raked up a bounty of cockles from the bubbling sound generated by the shellfish, as well as by the weight of it.

The cockles are automatically sorted by size – the small ones will fall out through the gap between the bars on the cage. These are thrown back into the sea to mature further. An unsightly part of the harvests is the litter that are inadvertently heaved up; most notable are plastic bags.

“We think pollution is causing the decline in the cockles,” says Mohd Fadillah. “Previously, there were prawn aquaculture farms not too far from here. Effluent containing chemicals used to clean the ponds were discharged into the same sea water that we fish in. There used to be several breeders, but some have ceased operating. The aquaculture activity has to stop in order for the water to return to its initial state.

“It doesn’t help too that nowadays, the soft sediment layer in the seabed that cockles depend upon for growth has been washed away by strong waves and heavy surface runoffs. Boats that navigate here, too, could have changed the seabed surface.”

He says factories in the vicinity could have compounded the problem of unmonitored discharge.\ 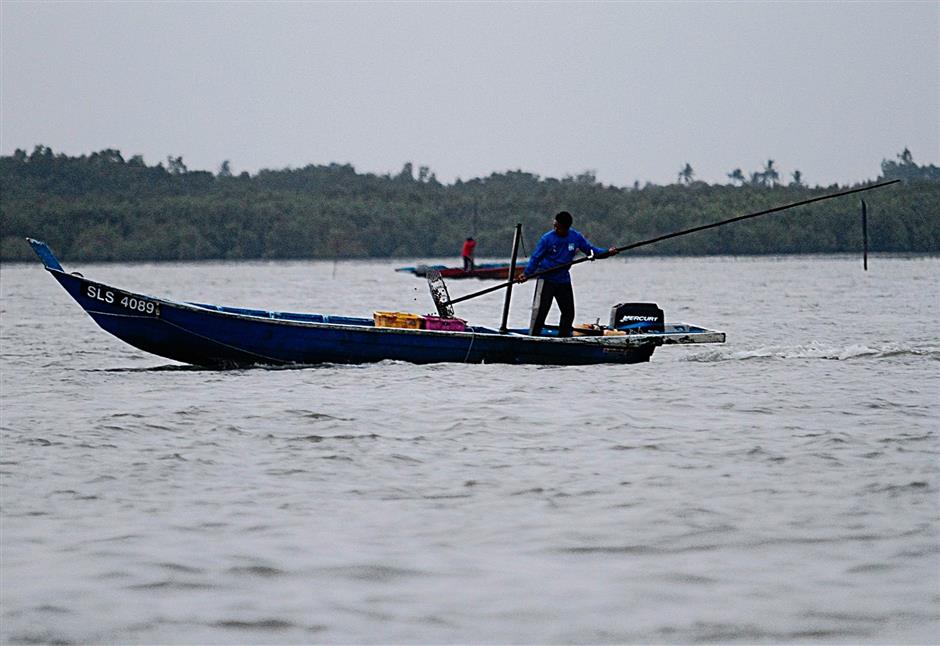 (Top) There are some 20 licensed cockle collectors in Bagan Sungai Buloh. (Bottom) Cockle collectors rake in plenty of plastic waste, too, according to biologist and eco-toxicology expert Dr Ahmad Ismail. 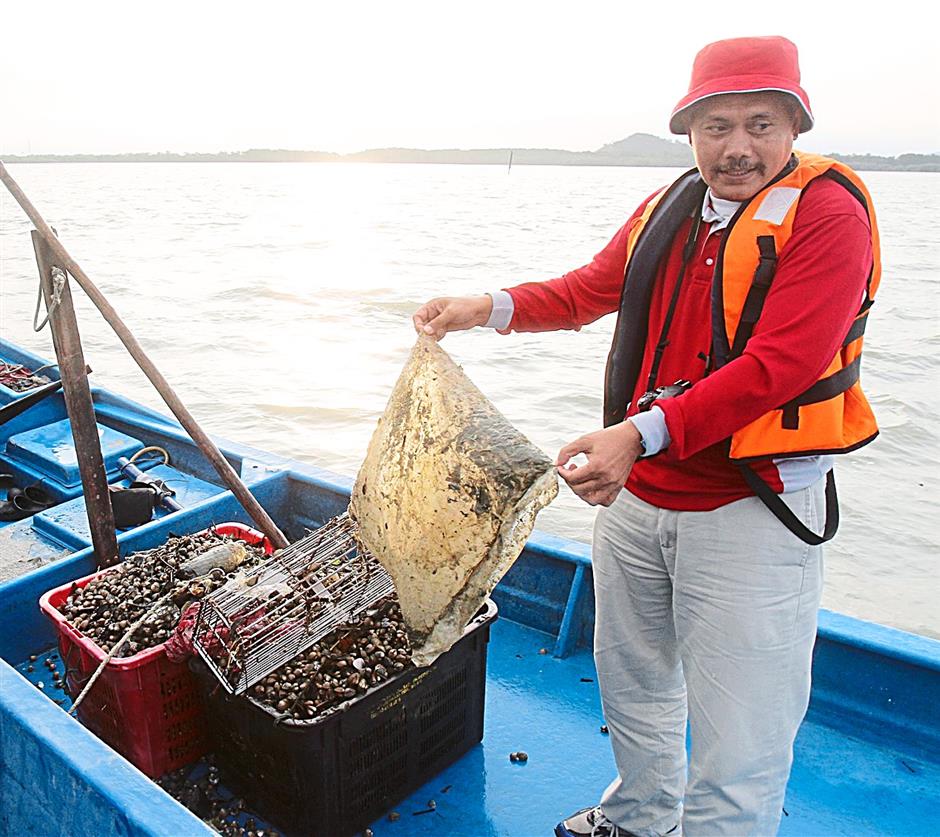 Dr Ahmad says the fishermen’s claims should be addressed, starting with proper assessment and sampling that can be made on water quality as well as on cockle seedlings and their growth rate.

“If pollution is detected from these samples, then the authorities have to come in. Elements such as arsenic, lead, cadmium, copper and zinc have to be looked into due to their toxicity, to see if they are within permissible limits or at elevated levels. Anthropogenic activities have to be taken into account, too, as they will contribute to the accumulation of hazardous chemicals in the environment.

“Right now, what we lack is specific data on the impact of pollution towards cockles. Rhis despite the alarm bells that have rung since 2012 on how cockle harvesters in Sungai Yu, Kuala Selangor, have suffered from chemical pollution in rivers that had threatened to destroy the lucrative cockle industry.”

In 2012, Selangor Times reported that cockle spats in Sungai Yu had died over a span of two months the previous year, and a 12km stretch of cockle bed from Pasir Penampang to Sasaran was ruined. The harvest in 2012 was reduced to one fifth of what it was two years earlier when the pollution was not as bad. What followed was the appointment of Japanese experts by the Agriculture and Agro-Based Ministry to examine the waters, which was found to be polluted.

However, no concrete action was taken to address the issue.

Dr Ahmad says a challenge remains, in the absence of monitoring effort and co-operation between agencies, which would have prevented the current state of affairs. “Right now, what we can do is train the fishermen to monitor basic biology and ecology parameters. For more extensive research to be carried out, funding is required. What’s really urgent now is for the authorities to establish the next step in order to save the cockle industry.”

A Selangor Fisheries Department officer acknowledges the pollution at Bagan Sungai Buloh to be at a drastic level.

“The water condition is clearly bad, though there are certain times that it is fine. However, we have no in-depth data on the water quality and it’s beyond us to enforce pollution control (this comes under the jurisdiction of the Department of Environment). We have had meetings with the respective agencies and stakeholders on this, but no solution has been found,” says the officer, who declined to be named.

"We are monitoring together with the fishermen, who have brought us to the site to highlight their plight. We have relocated some fishermen to new sites identified as suitable (for cockle breeding), but there is limited space, so not everyone can be relocated."

He says productivity of the cockle beds are also hampered by infertile sediment on the seabed. The department is surveying existing cockle farms to determine if they are still suitable for aquaculture.

Last year, a Universiti Selangor research paper Declining Production of Cockles in Relation to Ammonia Concentrations in Sungai Buloh River, Selangor reported that high ammonia levels in the waters of Bagan Sungai Buloh had caused the decline in cockle production there. The research was conducted by Mohd Fadzil Shuhaimi Ramli, Faizal Riza Abu Hasan and Mohd Nasir Saadon of the Science and Biotechnology Faculty.

In samples taken between January and June 2013, they found ammonia concentrations of 0.3mg/L (miligrammes per litre) to 4mg/L, which exceeded the cockles’ maximum tolerance level towards the substance. The paper stated that cockle production was between 300 tonnes and 400 tonnes in periods of low ammonia concentrations, but decreased to 270 tonnes in the presence of higher ammonia levels (figures are from January to June last year).

For the folk at Bagan Sungai Buloh, the mangrove mudflats which the cockles rely on for food have been given periodical clean-ups with the aid of the Malaysian Nature Society (MNS) and its rubbish collection efforts. The conservation group has been conducting education awareness programmes in the area since 2009. MNS programme officer Ashok Kumar has been assisting the cockle farmers to understand the effect of a compromised environment on cockles and other marine creatures.

While conservation is the topmost agenda, he helps the fishermen earn extra income through river cruises for visitors, especially during periods when the fishermen have no cockles to harvest. “On the boat tours, the public can learn about biodiversity and see why conservation is important. At the same time, they can experience the hard work of a fisherman,” says Ashok. 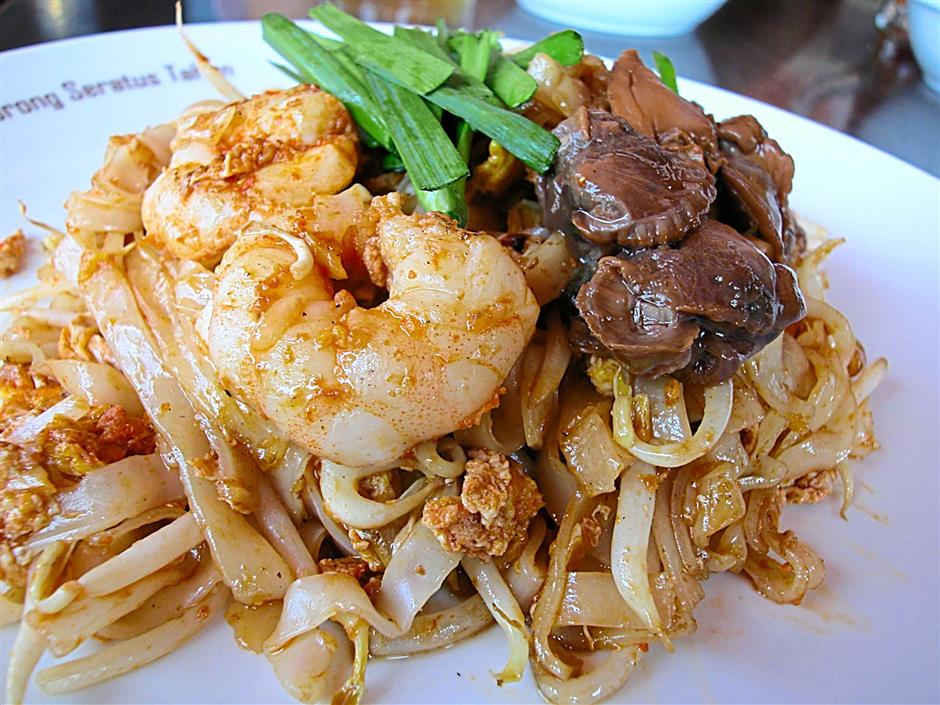 Race to save cockles 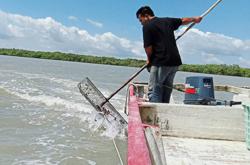 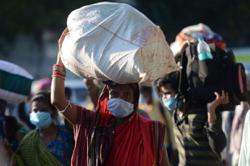