With an ever-mounting plethora of electronic devices that become obsolete all too fast, e-waste has become a mountainous problem.

Some of the most hazardous waste are generated by you and I. Our old fluorescent lights. Computers and laptops. Mobile phones. Batteries. Refrigerators. Air-conditioners. TVs. Some of these unwanted electronics and electrical appliances, or e-waste, quickly disappear when left at the curbside or at recycling centres as they contain reusable plastics, metals and even precious metals like gold and silver.

But they also contain harmful substances such as lead, mercury, cadmium and PCBs which pose health and environmental threats if the products are improperly processed during recycling, or when carelessly dumped.

As manufacturers churn out new tech devices and appliances which consumers quickly snap up, heaps of e-waste get left behind. Unfortunately, the infrastructure to deal with the mountainous problem has a lot of catching up to do.

The Department of Environment (DOE) is grappling with the e-waste problem and has only last year made its first draft of a regulation to manage e-waste from households, commercial areas and institutions.

With thousands of polluting industries to police, harmful waste discarded from homes, malls and offices is, understandably, the last thing on DOE’s mind.

E-waste was only added to the Environmental Quality (Scheduled Wastes) Regulation in 2005, but that legislation deals with industries.

A system is in place for DOE to scrutinise e-waste from industries (they have to report the volumes and send their e-waste to licensed recovery facilities) but none exists for e-waste from the general public.

“Our mechanism and infrastructure have yet to reach households as our law allows us to go to industrial premises but not homes,” explains Halimah. The DOE hopes to change that with the proposed regulation. E-waste from these uncontrolled sources rose from 652,909 tonnes in 2006 to 688,068 tonnes in 2008.

“We are concerned as the amount of e-waste is growing rapidly,” says Halimah. 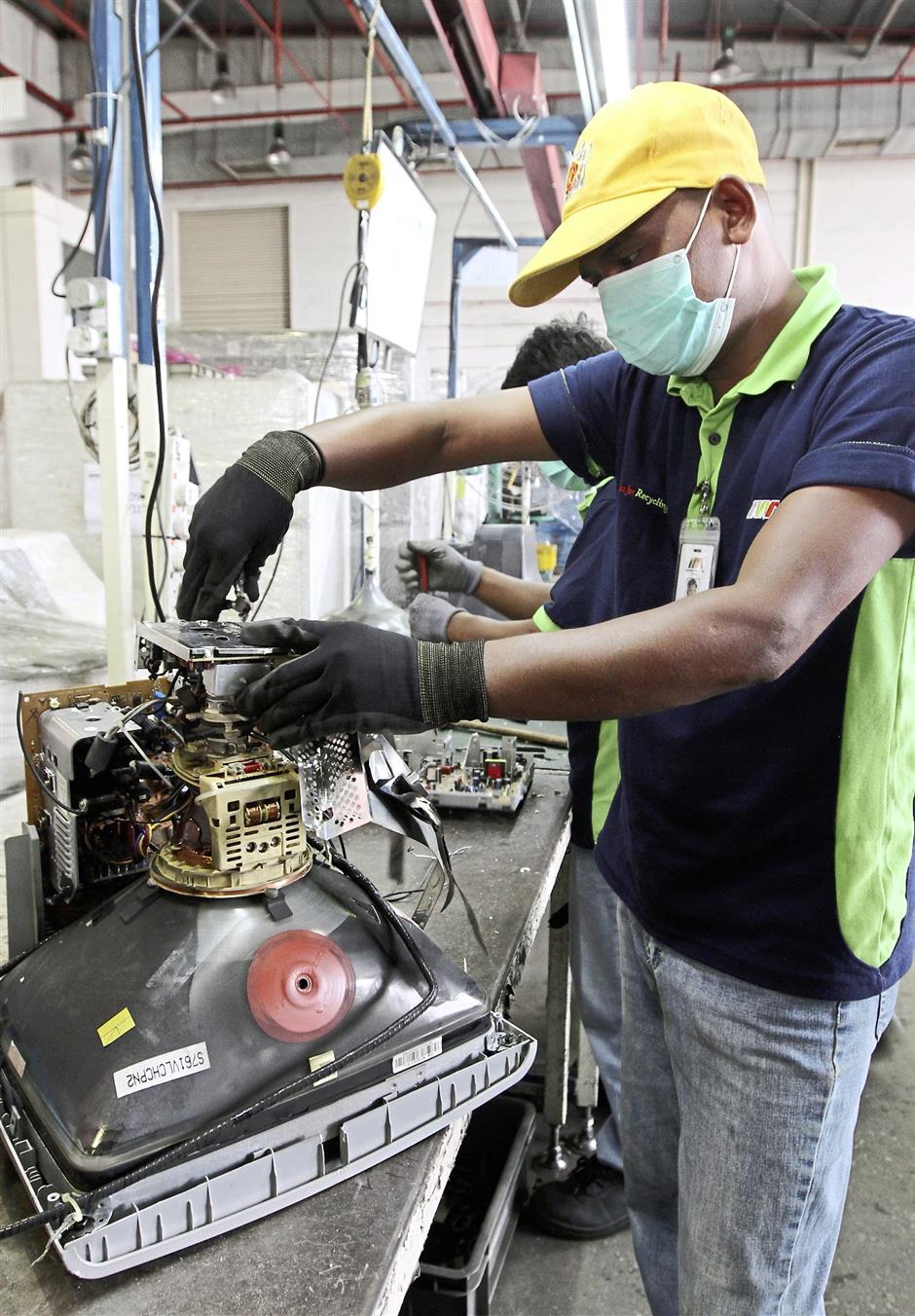 Tearing apart an old computer monitor to separate the different materials for reuse.


She shares that the regulation will draw on the principles of “polluter pays” and “shared responsibilities”. So it will place the burden of sound management of e-waste on everyone: manufacturers, importers, retailers, waste collectors, recyclers and consumers. The responsibilities of these stakeholders will be spelt out.

“All will have a role. Consumers, for instance, will be responsible for sending their old electronics and appliances to collection centres. Manufacturers will be governed by ‘extended producer responsibility’ (EPR). They cannot just produce and sell but must also be responsible for the end-of-life phase of their products. This will compel them to take into account environmental considerations in the design.”

The regulation will initially cover old televisions, personal computers and laptops, mobile phones, washing machines, air-conditioners, refrigerators, rechargeable batteries and fluorescent lights. Other products will be added later on. There will most certainly be a recycling or disposal fee of some sort to cover the costs of managing e-waste from households, commercial areas and institutions.

Norhazni Mat Sari, director of the DOE hazardous substances division, says the collection system can include drop-off points at retail outlets or hypermarkets, collection centres by NGOs, manufacturer take-back schemes, or collection on designated days by solid waste concessionaires. “We want to establish a system where people can send the e-waste and be sure that it is collected. We don’t want the waste to be siphoned off along the way or taken away by the informal (unregistered) recycling sector.” These gold-plated circuit boards will undergo chemical processing before the precious metal can be extracted. Photos: SAMUEL ONG/The Star


Clearly, someone should pay for the e-waste recycling and disposal, but who? The recycling fee can be incorporated into the product price or be paid by consumers when they buy a TV or laptop, such as is done in California which started its e-waste recycling programme in 2005.

Other US states, however, made the electronics manufacturers pick up the tab. The industry sets up recycling programmes and in some states, are required to meet recycling quotas (based on sales volumes). The catch here is that manufacturers can just pass on the extra costs to customers in the form of higher prices.

In Japan, consumers pay a recycling fee when they drop off their used appliances (televisions, refrigerators, washing machines and air-conditioners) at a retail outlet or collection centre.

Norhazni says the recycling fund can be used to subsidise the cost of managing or disposing non-profitable e-waste such as cathode ray tubes, batteries, lights and refrigerators. She also says the Government has no plans to provide subsidies for e-waste recyclers; it prefers to adopt the EPR approach. With numerous approaches to deal with e-waste and various aspects to consider, DOE has sought the help of the Japan International Co-operation Agency (JICA) to determine which will work for Malaysia. An MOU was signed early this month for a study to identify the most appropriate methods to collect e-waste, fund the recycling and processing, and report on the volumes. The project will take two and a half years.

In the meantime, it might be a good idea for us to reassess our obsession with new tech devices and home appliances. We are producing, using and throwing stuff which we have no way of discarding properly when they are no longer useful.

Next: The proper way to handle e-waste to keep toxic substances from being released. -->> E-waste needs proper handling to keep them from filling up landfills and releasing toxic substances into the environment.

Most people donate electronics believing they are doing right by the environment but often, they are ignorant of what happens to the product once it’s dropped off. Even civil society groups which carry out recycling drives often take little heed of where the waste ends up – they mostly just sell to the middleman who offers the best price. This means that the laptop you had dutifully dropped off may well end up with a polluting backyard recycler.

The Department of Environment (DOE) has licensed 146 e-waste recovery facilities which can handle 24,000 tonnes a month. Of these, 128 are small- and medium-sized operators doing partial recovery – dismantling products to retrieve plastics and metals, and other components which will be sold to another recycler for further processing. Another 18 are full recovery facilities which can do chemical processing.

It is the “informal sector” – a polite name for illegal or unregistered recovery facilities – which is of concern. “When it rains, polluting leachate just flows out. When they dismantle refrigerators, CFCs (refrigerant that depletes the atmospheric ozone layer) are released.”

These backyard recyclers are after materials which they can sell, and discard the rest. For TVs and monitors, for instance, they break the cathode ray tubes to get the metals inside, discharging mercury dust while at it. The lead-containing glass is dumped. DOE officers do check these places but because these are scrapyards, not industrial premises, they fall outside the ambit of the department. They are believed to handle large amounts of e-waste.

“They can get a lot of e-waste as they pay higher prices than us,” says licensed recycler Jason Yee. While it is great that mobile phones and computers get recycled (because of their precious metals content), appliances with little recycling worth or are difficult and costly to recycle are ignored and just left to pile up in scrap yards and landfills. White waste such as washing machines and refrigerators generally have little recycling value.

One e-waste with no solution in sight is fluorescent light tubes and compact fluorescent lights (CFLs). These are not recycled at all even though all the components can be recovered. No recycler or lights manufacturer has invested in the specialised machinery – it crushes the lights then sieves and separates the glass, aluminium and mercury for reuse – which costs some RM2mil. In addition, with no proper collection system in place, volumes of old lights are too small to make the recovery cost-effective.

So almost all our unwanted fluorescent lights get thrown out with the garbage and end up in landfills where they get broken and release toxic mercury vapour. “All of this, upon disposal, will release over 500kg of mercury into the environment.”

One local authority, he learnt, replaces 7,000 lights annually and all of it goes to the dump. Even when old lights are retrieved by well-meaning NGOs and corporate green campaigns, they still end up at the Kualiti Alam landfill. There, the lights are crushed, mixed with a cement-like substance and filled into drums and buried.

For Theng, the voluntary ad hoc collection of lights is just a campaign, not a sustainable project that can deal with the problem. He says managing such non-profitable e-waste calls for government involvement and support. “Recycling of e-waste is not always profitable. Recyclers must follow lots of safety procedures because of the presence of hazardous substances. This pushes up costs. Even the recovery facilities overseas do not make money and some are subsidised.”