With populations that run into the thousands, each university campus is a community in itself, generating as much trash as say, a village.

Their discards can be anything from five to eight tonnes a day, according to Dr Sumiani Yusoff, a solid waste management scientist at Universiti Malaya.

With there being 20 public universities and 200 private ones in the country, she estimates that the trash from these academic institutions amount to some 1,500 tonnes a day.

“They generate between 5% and 10% of the country’s total waste. And almost all are dumped into landfills,” says the associate professor in the department of civil engineering.

“The country now produces 33,000 tonnes of waste each day. It’s a pertinent issue that needs to be settled. We cannot rely on the Government … we should also take stock and do something about it.” Keng (left) and Dr Sumiani with one of the 10 textile waste recycling bins found at the UM campus.

And that is the push behind UM’s Zero Waste Campaign. The scheme started out as a final year project on recycling by students in the environmental engineering department in 2009 and expanded to include segregation of food and garden wastes for composting.

In late 2010, it grew into the ambitious Zero Waste Campaign (ZWC) with funding from CIMB Foundation. Today, aside from recycling the usual paper, plastics and metals, wastes such as food scraps, garden trimmings, textiles, electronics and wood are also diverted from landfills.

“Waste management is not just waste treatment. It is complex as it is about managing waste,” says Sumiani, principal co-ordinator of the project.

“It entails various aspects such as generation, collection, reuse, recycling and disposal. Waste, if recovered, can be a resource. We should re-look our waste disposal hierarchy. We should first reduce, reuse, recycle, process and finally only landfill if we cannot do anything with it.”

Guided by that philosophy, the ZWC team adopted a multi-pronged strategy as the various waste-types have to be dealt with differently. It also collaborates with various private companies to ensure proper handling of the waste after collection from campus grounds. As a start, the placement of recycling bins all over the campus encourages waste separation. The recyclables are collected by janitors and sold to recyclers.

To ensure proper disposal of electronic waste, there is a drop-off bin at the ZWC project site located at the university’s waste storage area. Occasionally, special collections and pick-ups are organised for e-waste, which is then recycled by the company T-Pot E & E. The project, however, does not handle hazardous waste such light bulbs and laboratory waste; that is the domain of the UM occupational health unit. A key focus of the campaign is organic waste since that forms between 50% to 60% of our total discards. “If we ignore organic waste, we’re ignoring the bulk of our waste problem,” explains Sumiani.

“Landfills are the biggest source of man-made methane (released when organic waste decomposes). Methane is a potent greenhouse gas. Although its concentration (in the atmosphere) is 200 times lower than that of carbon dioxide, it accounts for 20% of the current warming capacity. If we tackle organic waste, half of our waste problem is already solved. Another 20% to 30% of waste can be recycled. That leaves a small amount which cannot be recycled. Then only can you talk about incineration of the remaining waste.”

The 20 food outlets in the UM campus generate some 400kg of food waste daily. To deal with that, in September 2011 the ZWC team started a composting scheme to turn the waste into compost. Cafe operators have to separate their waste; food scraps go into white plastic bags so as to distinguish them from the recyclables and general waste which are put into black bags. 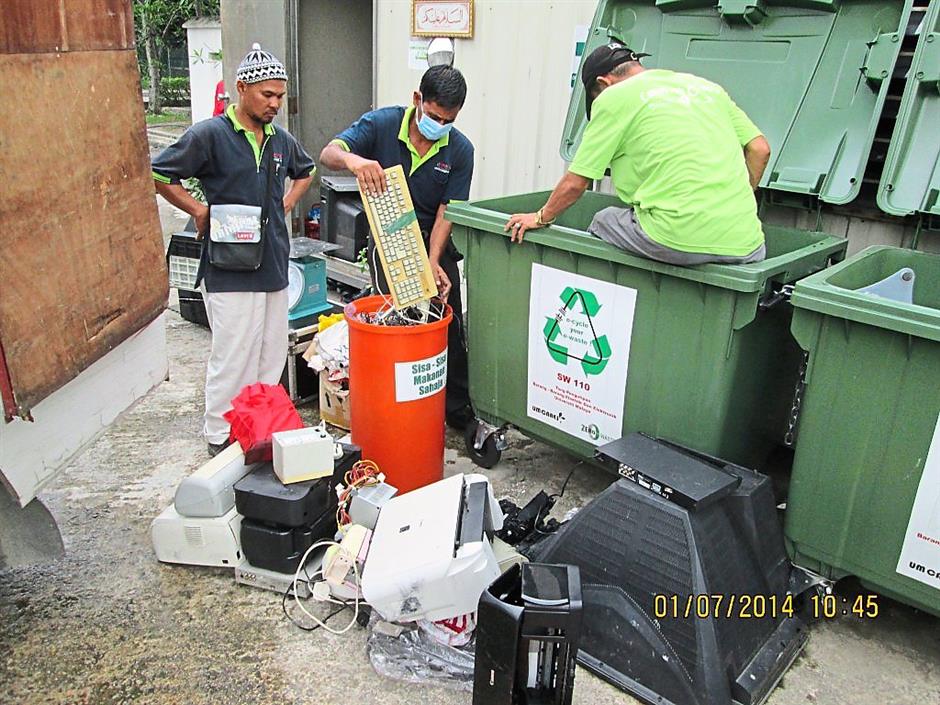 The food waste, together with garden trimmings, are sent to the waste storage area. The waste is piled into heaps and stirred daily to encourage aerobic decomposition by microbes. After four to five weeks, it would have broken down and mature into fertile compost, which is used to enrich the soil. The compost is distributed free to UM communities.

At the site, some organic waste is treated in an anaerobic digester. The UM team is researching the performance of the machine, provided by the company CH Green. This method produces liquid compost and methane.

The volume of the gas, however, is too small for conversion into energy. So, it is merely flared or used as cooking gas by the workers.

Currently, the composting effort can only handle four out of the 10 tonnes of organic waste thrown out each month. The remaining waste still has to go to landfills.

“Nevertheless, through the composting scheme, some four to five Ro-Ro bins (dumpsters) of organic waste are diverted from landfills each month and turned into a resource,” says ZWC manager, Jaron Keng. “It also leads to savings in transport costs, fuel and tipping fees as well as non-tangible benefits such as emission reductions and environmental protection.” After four to five weeks, these heaps of food and garden waste will be transformed into useful compost.

Until December 2014, over 145,300kg of organic waste has been treated, producing 4,700kg of compost and curbing the emission of 70 tonnes of carbon dioxide equivalent.

Challenges remain, however. The need to purchase the white plastic bags – some 80 bags are given free initially – might deter cafe operators from using them. To counter that, the team plans to seek the help of the university administration to subsidise the bags.

“Continuous campaigning is needed to educate food outlet operators as they change when contracts expire. The waste separation is now voluntary ... some couldn’t care less and are not helpful. We hope to get the university to make waste separation a policy,” says Sumiani.

The team also tied up with Kris Biofuel to turn used cooking oil into biodiesel, but faces difficulties in collecting the waste. “Cafe operators prefer to sell to recyclers who pay a higher price. We cannot offer a high price as diesel price is low,” explains Sumiani. Wood waste consisting of unwanted furniture and tree cuttings are sent to a paper mill for use as fuel.

To handle textile waste, the team collaborates with a recycler, Life Line Clothing. The collaboration started a year ago with only two drop-off bins. Now, there are 10 bins all over the campus for people to dispose of their old clothes and household textiles such as curtains and bedsheets.

Old toys, bags and shoes are also accepted. Life Line donates a certain sum (undisclosed) for every kilogramme of waste dropped into the bin, to three charities – the Malaysian Association for the Blind, Spastic Children’s Association of Selangor and Federal Territory, and the National Cancer Council.

Some three tonnes of wastes are collected each month. At the textile recycling factory located in Port Klang, the items are graded. The usable items are sold as second-hand goods here as well as shipped abroad. The rest are turned into industrial cleaning rags or sent to another facility which processes the waste into fuel.

In December, the campaign expanded to cover wood waste – mainly old furniture and tree cuttings. Some five tonnes are collected each month. The waste is used by TSP Waste Management to run boilers in its paper mill in Rasa, Selangor, thus avoiding the use of fossil fuel.

Sumiani estimates that the ZWC project has stopped some 13% of waste from ending up in dumps. “This is better than the national recycling rate which is at 10.8%.” The project has ambitious goals – a waste diversion target of 15% by 2020, 30% by 2030, and 60% thereafter. Food waste goes into a separate bin so that it can be sent for composting.

What about reaching “zero waste”?

“It is an elusive goal to get zero waste but we’re striving to reduce as much as possible. We called it Zero Waste Campaign as we have to think big and aim high. It is also to challenge ourselves so that we keep improving and one day, we will be zero waste. Europe is almost zero-organic-waste. When we started, we were only recycling, then we tackled the organic waste. Now, the project has expanded to handle e-waste and also textile waste,” says Sumiani.

Indeed, the ZWC has developed several key projects that have raised the recycling rate in the campus and diverted waste from landfills. Waste disposal costs have also been reduced, as have environmental pollution and carbon emissions. The pioneering project is a role model for integrated waste management and will boost UM’s aspiration to be a green campus.