Free bike for a day for your empty cans and bottles

Students and staff of Universiti Putra Malaysia are cycling – and recycling – more these days thanks to the Recycle-to-Cycle green programme.

AT Universiti Putra Malaysia in Serdang, Selangor, it is not unusual to see staff members and students cycling around the campus. Some no longer rely on shuttle buses for transportation but on their two-wheelers.

The green effort is part of the Recycle-to-Cycle project initiated in February last year by Prof Dr Ahmad Ismail, head of the biology department. It stemmed from a proposal by beverage company Coca-Cola, which wanted to conduct a campus activity to commemorate Earth Hour. However, Ahmad had a different idea; he wanted a project that would make an impact beyond an hour.

“We have a population of about 30,000 on campus. Even if just a third of them use plastic cups or bottles daily, where would these materials be discarded? So, I came up with a plan to get students to recycle, via an incentive. The initial launch was to have them bring eight PET (polypropylene terephthalate) bottles in exchange for a Coca-Cola T-shirt (made from fibres produced from recycled PET bottles). We received tremendous response with four full lorries of PET bottles collected.” The Recycle-to-Cycle project provides students and staff members of Universiti Putra Malaysia free use of bicycles whenever they recycle.

The plan developed into a bigger campaign to encourage students to lead a healthy lifestyle by cycling. Ahmad received a US$250,000 (RM750,000) grant from Coca-Cola to take the project a step further. Under the new scheme, four aluminium cans or eight PET bottles can be exchanged for free rental of a bicycle between 7am and 7pm. The grant was used to purchase 80 bicycles; another 70 will be added later on.

“Part of the grant went into insurance coverage for the bicycles and riders, servicing costs, safety helmets and construction of a shelter for the bicycles. The students can cycle anywhere on campus now. The university has been supportive of this project. Bicycle lanes and footpaths have been built,” says Ahmad.

He says the effort has helped the university reduce its carbon footprint. One of the greenest campuses in the country, the university has made it to the list of UI GreenMetric World University (which ranks universities based on environmental sustainability). It was ranked 16 on the GreenMetric list last year, having started out at the sixth spot in 2010 – competition was stiff, according to Ahmad. 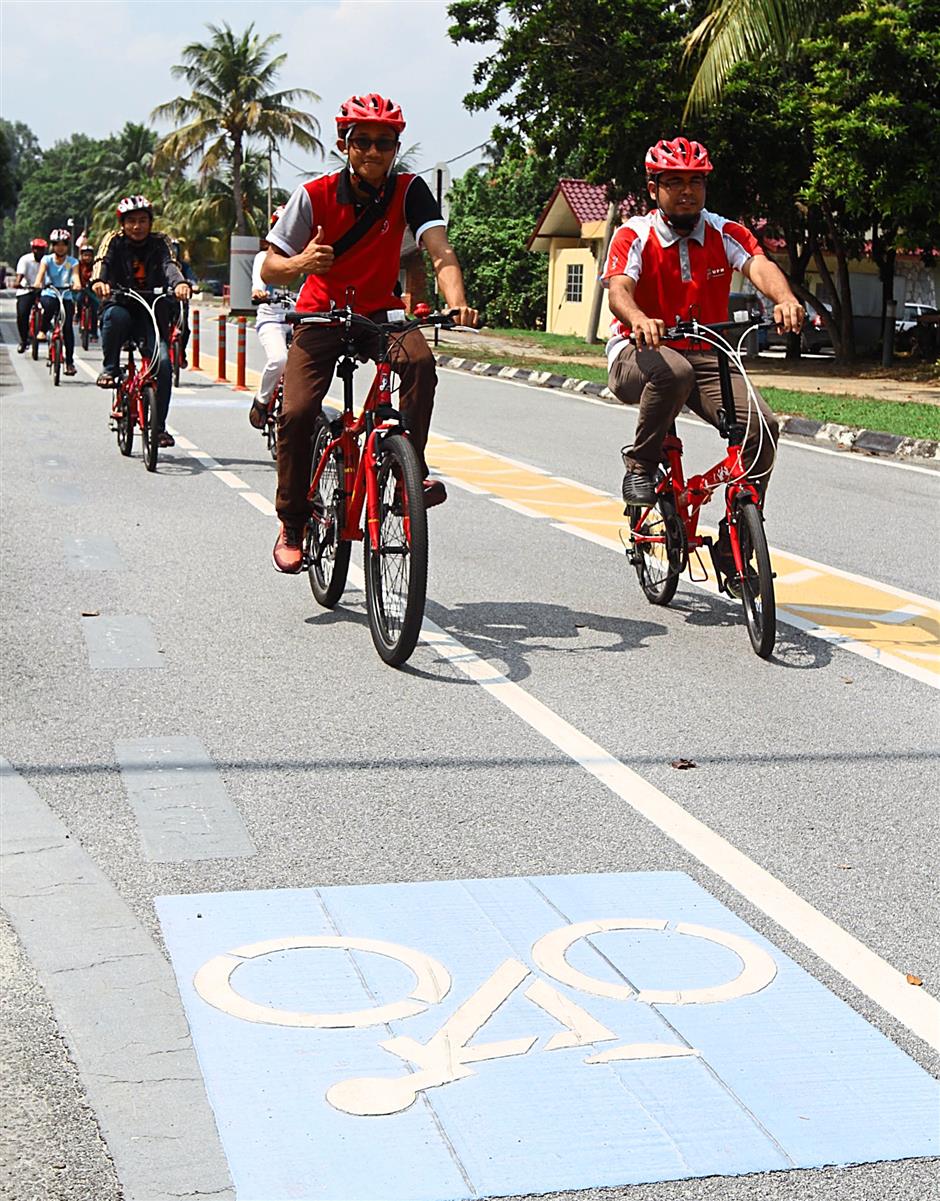 Though usage of the bicycles is still low, with only 20 being taken each day, Ahmad is unperturbed. “My aim is to make the students use the bicycles according to their needs. Right now, we have three groups renting the bicycles regularly ... those who practice recycling, those who cycle every evening for exercise, and staff members who use the bicycles for their monthly activities.”

A fervent supporter of the green campaign is Masters student Nurfitri Liyana Shamshudin, 24, who has amassed Coca-Cola T-shirts and other collectibles as rewards. “I arrive early at the campus each morning to collect enough cans (from rubbish bins) to rent a bicycle. It is good exercise to cycle to get my food or just around the campus. Some complain that the hot weather makes it impossible to cycle but that’s not an excuse. One can always wear a cap.”

Nur Adilah Auyob, 24, shares her sentiments. She says it is not easy to change mind-sets but she sees more students cycling now. Thanks to the green programme initiated by Prof Dr Ahmad Ismail, more students and staff members at the university are recycling aluminium cans and plastic bottles. Student Tunku Ainna Tunku Azmir Shah, 25, diligently recycles her drink cans though not for the bicycles as she cannot cycle. “It’s convenient to dispose the cans in the recycling bins provided. This campaign is a good effort to get more people not just to recycle but also to cycle, which helps reduce the number of vehicles on campus. Hopefully, there will be more promotional banners put up throughout the campus to benefit more students.”

Recycling comes naturally to her as back home, it is already a family habit. “My mum sends papers and water bottles to the recycling centre and receives some cash in return,” says Tunku Ainna, who recycles about 10 cans a week.

Ahmad says there are about 5,000 students who own their own bicycles and so are not part of the Recycle-to-Cycle group. He says the average weekly collection of 2,000 pieces of cans and bottles are sold to recyclers, and the money is used for recycling-related activities. Next year, there are plans to start a workshop to train students in bike repairs, which will save them repair costs. Students Nurfitri Liyana Shamshudin (R) and Nur Adilah Auyob (L) have benefited from free use of bicycles daily while doing their bit for the environment.

Another benefit of the project is that fewer people are hopping on the shuttle buses, so much so that the university has reduced the number of buses on campus grounds.

“By reducing the need for motorised transportation, we can also reduce accidents and the need for road maintenance. We are also seeing more people taking up walking, not just cycling,” says Ahmad. “This campaign has instilled the culture of not littering among students and staff. But when it comes to getting them to recycle, there’s still room for improvement and more progress to be made.”