Forty malls to enter the market in Greater Kuala Lumpur

The group bought Sunway Putra Place, which comprises a hotel and an office block, during a public auction in 2011 for RM522mil. Refurbishment of the office and hotel component is expected to be completed next year.

THE Sunway Group expects the retail sector to be “extremely competitive” with 40 malls anticipated to enter the market in Greater Kuala Lumpur by the year 2020.

Of this, a dozen of them will have net lettable area (NLA) of about one million sq ft and above, says Sunway Shopping Malls & Theme Parks CEO H. C. Chan, which is part of the larger Sunway group.

As a rule of thumb, malls of this size will have considerable impact on the sector although there is a place for smaller neighbourhood malls.

Chan says two factors will be the underlying thorn in the flesh for Sunway’s retail business – the steep competition entering the market and the “critical” juncture it finds itself in as a result of evolution in the mall business.

“We are at a critical stage of our journey,” says Chan.

“Critical” because the last two years we have seen malls open with just 50% occupancy, he says.

Chan says the mall management sector has become saturated and the group will have to give enhanced customer service and experience, he says.

The group is in the midst of planning and strategising for the next leap forward but he declines to elaborate. It will look at improving its themed concepts.

Chan says because it is an integrated developer, it has planned most projects to leverage on each other and surrounding vicinity.

The group, says Chan, is involved in between seven and eight sub-segments of the property sector. They are in every location, in different parts of the city, Penang, Ipoh and Johor.

Because of its experience in mall operation and management and its network of properties, the group has managed to set itself apart from others. Nonetheless, it will get harder to fill up space despite the team having learned the details of retail operations and management.

It will “become easier” with each new mall, but it will also be tougher because of the overall environment it is operating in, he says. 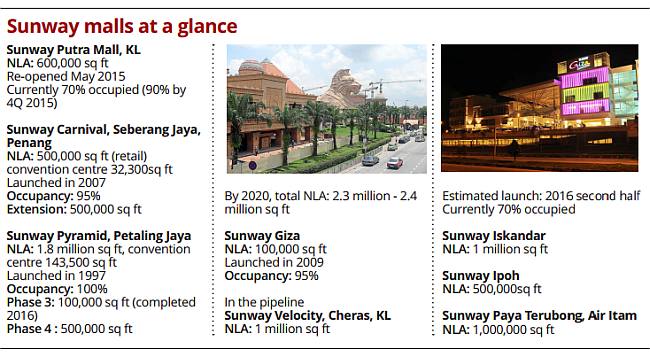 “Our people, processes and branding will help us to be market leaders,” he says.

The group opened Sunway Putra Mall near the Putra World Trade Centre (PWTC) in May.

The group, via Sunway REIT bought Sunway Putra Place which comprises a hotel and an office block during a public auction in 2011 for RM522mil. Refurbishment of the office and hotel component is expected to be completed next year.

The group’s total investment is about RM1.033bil (including the purchase price) and expects to recoup Sunway Putra Place investments within 12 years at a return on investment rate of between 7.5 and 8%. The mall opened with about 70% occupancy rate and expects to lift that to between 90 and 95% by the end of this year, says Chan.

Chan says the mall industry is so competitive today that malls need to leverage on other components within. It is here that the Sunway group, being an integrated developer, will seek help from other resources within the group.

Sunway Putra Place offers a hotel and office components. Because it is located next to PWTC, the trade shows there have provided them with good traffic. Chan expects the MATTA Fair held at PWTC weekend to boost visitors considerably. Average rental for Sunway Putra Mall is between RM6 and RM7 per sq ft. There are 400 shops there.

The next mall to be launched is Sunway Velocity in Cheras and comes at a time when the overall economy is going through a slow pace with colossal competition coming from every front. A research house as estimated rental to be between RM7 and RM8 per sq ft.

Velocity will be competing for traffic with MyTOWN Shopping Centre, a project by Boustead Holdings Bhd

and Ikano Pte Ltd. The Boustead group built the Mutiara Damansara township in Petaling Jaya and developed the Curve, an integrated retail development which is hugely popular and where Ikea is currently located. That has attracted visitors from near and far. Its Ikea KL is expected to be another crowd puller.

MyTOWN will have 1.1 million sq ft and is expected to open its doors by the end of 2016, at about the same time as Velocity. It will have the largest Ikea store in the country, a factor that Sunway will have to reckon with.

MyTOWN’s general manager, Kenny Chin said MyTOWN “will not just be another mall.” The development there is expected to resemble the seamless connectivity the Curve is known for.

Sunway Velocity will also have to deal with big name in the form of Australia-based Lend Lease group in Tun Razak Exchange (TRX).

Lend Lease has bought 17 acres in TRX and will build its mall there. Lend Lease is expected to do a ground-breaking in TRX this month.

That mall is expected to be in the same league as Suria KLCC mall and KL Pavilion. Commercial land are being sold currently in TRX and prices are above RM4,000 per sq ft. That will given an idea of the purchasing power of the people working and living in TRX.

Although Chan says Velocity will have five components – mall, hotel, residential, hospital, education and offices – Sunway will have to fine-tune its strategy and concepts besides competing on the space level.

Its one million sq ft or more will make it a viable and credible competitor. However, it will be entering the fray with world renowned brands, global marketing strategies and concepts. Filling Velocity’s 5,000 car park space will need some clear-headed and shrewd thinking.

Velocity will be among six new malls to be added to the group’s current four, namely Sunway Pyramid in Sunway Resort City in Petaling Jaya, Sunway Giza in Kota Damansara PJ, the newly Putra Mall and Sunway Carnival in Penang.

Chan says within five years, Sunway plans to bring its portfolio of malls to about 10.

The group is working on plans to open Sunway Paya Terubong in Air Itam, Penang, Sunway Ipoh in front the Lost World of Tambun, Sunway Iskandar where the group has 1,600 acres and extentions in Sunway Pyramid and Penang’s Sunway Carnival.

He said it portfolio of malls will give it some amount of cost savings.

An August report by AllianceDBS Research Sdn Bhd says Sunway Pyramid, which has a NLA of 1.6 million sq ft as its key earnings driver. It has injected Sunway Pyramid and Sunway Carnival into Sunway Real Estate Investment Trust

(Sunway REIT). Although Sunway Reit has a diversified portfolio of 14 assets, Sunway REIT derives 60% of its income from the Egyptian-themed Pyramid mall.

The group is working on a 100,000 sq ft addition in its phase three extension which is scheduled to be completed by the end of this year. Another additional 500,000 sq ft is slated for its phase 4 extension. On completion by 2020, Sunway Pyramid will have between 2.3 million and 2.4 million sq ft of NLA.