The joy of travelling for the visually impaired

Places that include Braille description, such as the Sanchi Stupa in India, help to enhance a blind person's travel experience. - Biswarup Ganguly/ Wikimedia Commons

The lack of sightseeing options does not deter the blind and visually impaired from travelling.

After a long and arduous climb one day in December 1981, Liza Maria Beh found herself at the top of Ayers Rock in Australia. While other hikers took in the scenic view of the ancient MacDonnell Ranges, it was an entirely different experience for Beh. The heat, wind and sounds created thrilling sensations for the woman who was born blind.

“You lose the input of sight, but you still receive other input, such as sounds and the feel of the surroundings,” says Beh.

“Travelling is very good, whether you’re blind or not. You learn about people’s culture and get to sample the food of the many places you visit,” she adds.

Hearing the 57-year-old recount her experiences, one gets a sense that with the exception of sightseeing, travelling is really not that much different for the blind and visually impaired as it is for the sighted.

However, Beh – who has travelled to places such as Boston, Massachusetts in the United States and England – is quick to say that a sighted guide remains an integral aspect of a blind person’s travels. “For the blind, travelling can be a problem, so we need help from volunteers. Since we can’t see the things with our own eyes, we need people to describe the scene for us,” says Ooi.

MAB council member K. Sundralingam, 78, is one such volunteer. The man who has aided Ooi on his travels to several places of attraction within the country says that the best ratio of sighted guide to blind traveller is 1:1 as this allows the guide to give full attention to his travel companion.

When it comes to describing scenery to the blind or visually impaired, Beh stresses that it is important to tell it as it is, so that they are not deprived of the complete experience.

As for guiding a blind person, the sighted companion should let the blind grip their elbow or rest their hand on the shoulder and walk forward one step at a time instead of gently pushing the blind from behind.

While having a sighted companion is invaluable, solo travel is also achievable for the blind and visually impaired. Dr Tan Tok Shiong, 56, is one such independent individual.

The man travels with just his walking stick, a backpack and some cash.

Tan, whose visual impairment comes from a genetic mutation that developed since birth, enjoys travelling by long-distance walking.

“The only thing that I can see clearly is the white line on the road. By following the white line, I could go from town to town,” explains the former lecturer. Among the places he has been to include Brunei, Thailand and Samosir Island in Indonesia.

“Just the joy of walking makes me want to travel. When I start my journey, I feel a rush of happiness and I’d walk for many days. Only when I start to feel bored or when my legs start to give up that I end the journey and go home,” says Tan. A good sighted companion becomes the 'eyes' for the blind or visually impaired person on their travels, and should describe the sceneries as they are.

Tan makes all the necessary logistics arrangements himself and navigates his way around by engaging with the locals.

“When people pass by me, it’s an opportunity to talk as well. So I’d ask them how to get to certain places or whether or not I am going in the right direction,” explains Tan.

He adds that the strangers he has encountered have been accommodating. However, things can get a little tricky in countries where people are usually behind the wheel, such as in Brunei, as there will be fewer pedestrians whom he can seek assistance from. These days, Tan participates in trips organised by MAB.

When it comes to local attractions, the options for the blind are surprisingly limited. Malaysian museums, according to MAB low vision assistant Barnarbas Lee, can be quite unaccommodating for the blind and visually impaired.

“In the local museums, they are very scared when the blind touch the displays. When you want to touch a display, you usually get responses such as ‘It will break’, ‘It will get dirty’ or ‘You will leave fingerprints’,” says Lee. For a simple activity like shopping, he says most shopkeepers are usually very cautious as they’re afraid the blind will knock over the items on display.

Although Lee understands the reservations that some of the officials have, he says that the blind and visually impaired also long for a warm Malaysian tourism experience. 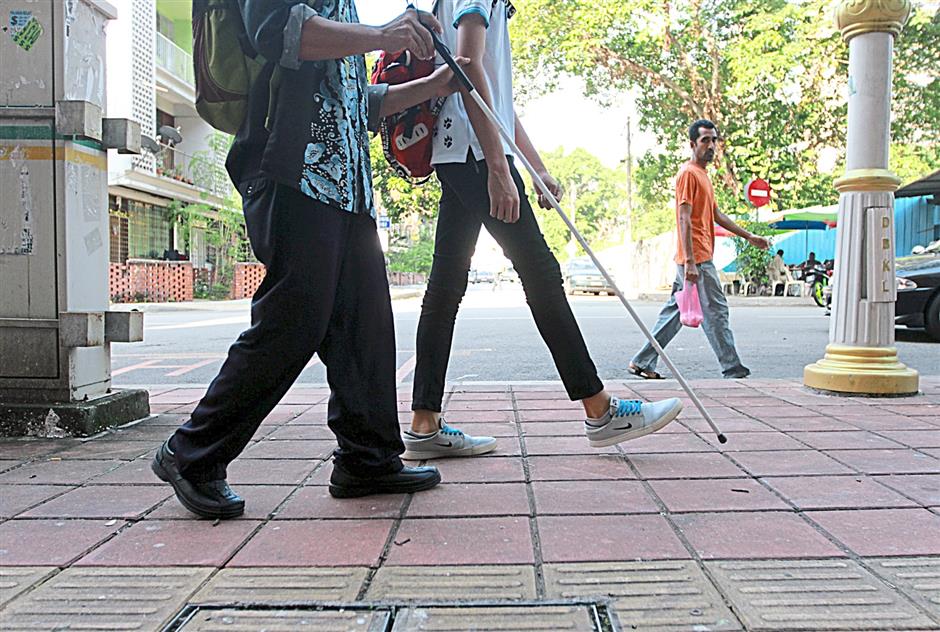 A sighted companion usually walks a few steps ahead when guiding a blind person during a trip.

Ooi says that it’s imperative to incorporate touch as that enhances the overall experience. He suggests that museums install Braille descriptions and models of the displays that the blind could feel with their hands.

Lee says that the local tourism industry should emulate some of its overseas counterparts. “When you go to Europe or Australia, the stage shows and performances are accompanied by descriptive audio that help the blind,” he says.

He adds that it’s also quite difficult to engage with local tour companies.

“Most local tour companies are worried, I suppose. I don’t blame them. Perhaps they are not aware of the needs of the blind when we travel,” says Lee.

If anything, the lack of knowledge is one of the biggest barriers that prevent the travel industry from being completely accessible to the blind.

The airport for one, according to Beh, is a place where lack of awareness results in the blind and visually impaired being unintentionally patronised.

“You ask for help, and they bring out that silly wheelchair. Somehow, people tend to lump the disabled with a wheelchair. The blind can walk so we don’t need a wheelchair. All we need is a sighted guide to help us,” says Beh.

However, Beh isn’t bitter about the ordeal as she knows that educating the general public about blindness is an ongoing task.

The crux of the issue is that the blind and the disabled community remain sidelined by society. This inadvertently makes them a relatively untapped market in the tourism industry.

That doesn’t take away the fact that it’s still a market with huge potential, notes Beautiful Gate Foundation for the Disabled executive director Sia Siew Chin, 47. The foundation has organised both national and regional conferences to promote accessible tourism for the disabled.

Sia says the tourism industry has to realise there will be more and more partially sighted people as the number of senior citizens increase in tandem with improved general healthcare quality.

While there is indeed untapped potential in tourism for the blind, Cherry Bird Travel & Tours managing director George Woo says the demand is still relatively low. The travel agency has facilitated tours and transfers for the blind and disabled.

“What we do is we will recce the accommodations and places of interest to make sure they are suitable and friendly to the disabled,” says Woo.

“Facilitating tours for the blind and disabled entails more than regular tours. It’s challenging but not impossible,” he adds.

Although lack of proper amenities has not deterred the blind and visually impaired from travelling, Beh says it would be nice if people were more forthcoming in helping the blind community.

“Blind people should be empowered to go on their own adventure,” she concludes.