Cities have been the engines of economic growth. But the development was not always “smart,” sacrificing health conditions, for instance, for greater productivity. With greater use of technology, a number of cities are accumulating data, delivering innovation and enhancing the lives of citizens. In return, there will be a multiplier effect for economic growth.

Cities are meant to be liveable, productive and sustainable. It is expected that half of the population of Asia will be living in cities by 2020. Many people have either migrated or prefer working in the cities. However, the pace of development is unable to cope with the demand of the citizens.

With IoT, sensor data can be placed throughout the city to capture various information about its health, cleanliness, congestion and safety. This data can either be captured via fixed sensors located at strategic places or the citizens themselves, who will be able to help in gathering such information.

Another term that is becoming more popular with the emergence of IoT is “crowdsensing”. This term refers to the sharing of data collected by sensing devices with the aim to measure common interests. Sensing devices may include, for example smartphones, sensor embedded gaming systems, music players and in-vehicle sensor devices. But the most popular crowdsensing device is the smartphone. No surprises there!

Crowdsensing has also become a new model which allows this large number of mobile phones to be used not only for exchanging information between users, but also for activities that may have a huge societal impact.

Crowdsensing applications are particularly attractive to organisations because they can provide the organisations with valuable data without the need to make significant investments. In fact, it has reignited citizen engagement with their government authorities, opening up new perspectives for cost-effective ways of making local communities and cities more sustainable, livable and safe.

With the ability to acquire local knowledge such as the location, personal and surrounding context, noise level, traffic conditions and noise pollution through sensor-enhanced mobile devices, it opens up many possibilities to share this knowledge within the social sphere, among practitioners, health care providers, urban planners and utility providers such as local councils.

Citizens have been complaining about many things and the authorities have tried very hard to solve these problems. But the citizens still felt that response is still too slow. Many countries are now embarking on smart city projects. A smart city uses information and communications technology (ICT) to enhance its livability, workability and sustainability.


A smart city has everything from traffic management to water distribution, to waste management, urban security and environmental monitoring. Its popularity is fueled by the fact that many smart city solutions promise to alleviate real pains of people living in cities these days. IoT solutions in the area of smart city will help to solve traffic congestion problems, reduce noise and pollution and help make cities safer. 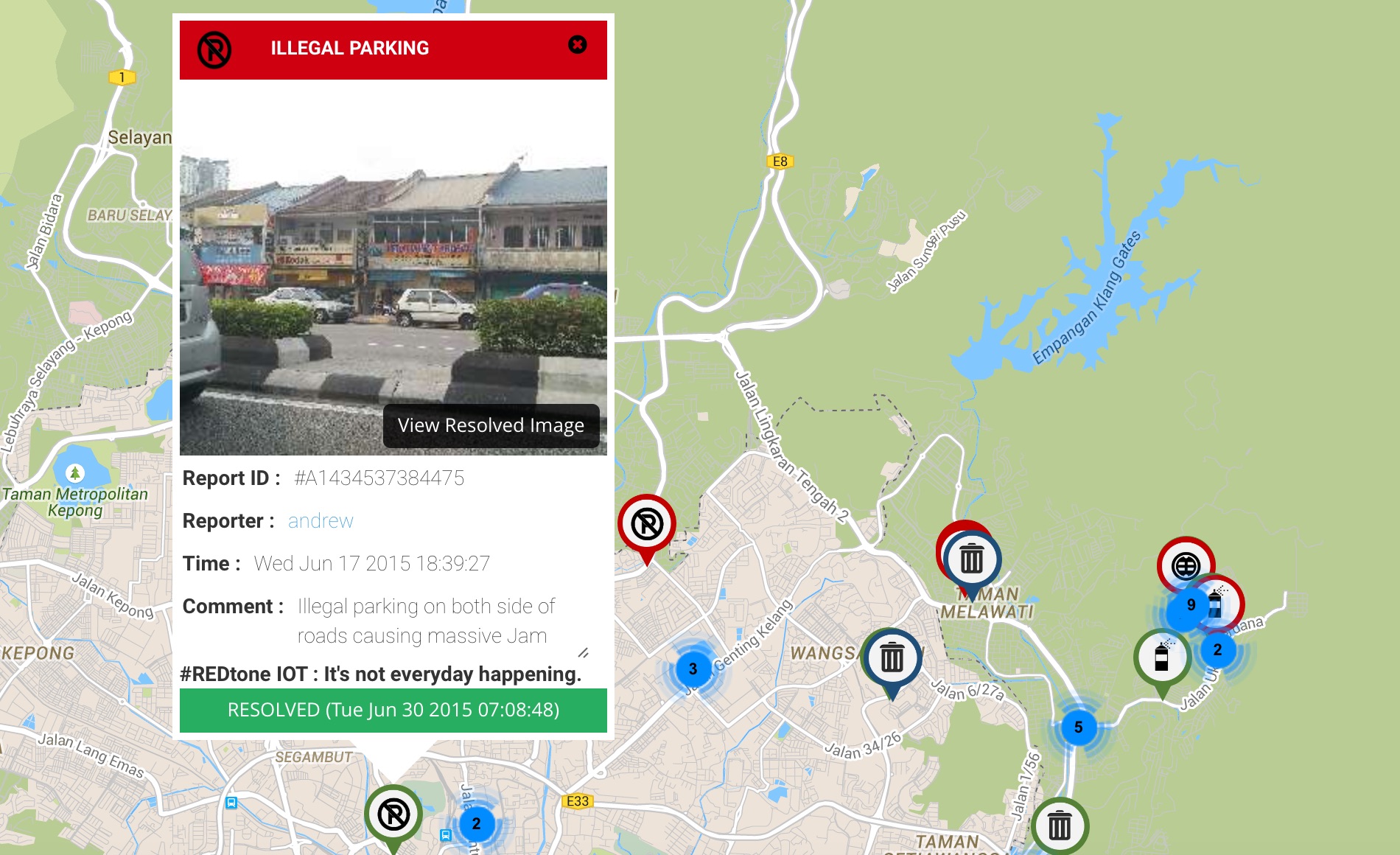 Citizen's report: Technology enables a person to notify others of a traffic jam.

Using the personal smartphone as the crowdsensing device, we can develop mobile applications such as the soon-to-be launched CitiAct by REDtone that empower citizens to identify city problems such as:

•    Road conditions such as potholes, blocked roads, dangerous corners etc
•    Traffic lights that are faulty or are improperly timed
•    Accidents or hazards on roads
•    Location of dirty rivers
•    Dumping of rubbish into rivers
•    Hawkers blocking roads
•    Reckless motorists or those who use emergency lanes to overtake
•    Bus drivers who drive recklessly
•    Inconsiderate parking
•    Dirty hawkers or restaurants
•    Garbage trucks that do not collect garbage properly or not do the rounds
•    Blocked drains, fallen trees
•    High crime areas

These reports can be channeled automatically to the relevant parties. There are three parts to that job – collecting, communicating and “crunching.”

First, a smart city collects information about itself through sensors, other devices and existing systems.

Next, it communicates that data using wired or wireless networks. Thirdly, it “crunches” (analyses) that data to understand what’s happening now and what’s likely to happen next.

Malaysia has just recently unveiled its National Internet of Things Strategic Roadmap. To realise the vision of the roadmap – “Malaysia to be the Regional IoT Development Hub”, we must be able to identify an iconic project for the country.


We believe the Smart City is one of them. The scale of the project will identify and bring various stakeholders together. It will not only create new jobs, but also make our cities better places to live in.