GETTING CREATIVE WITH CARDBOARD: Lilly and Leon, together with baby Orson, get into the act of recreating scenes from their favourite movies using junk they have accumulated. - Used with permission from Cardboard Box Office

Susanna Khoo ponders three seemingly disparate online stories that expound on a similar principle: That life is what you make of it.

I received a timely reminder recently while surfing the Web, thanks to a bunch of twist ties; an old, forsaken wedding dress; and a curious collection of cardboard boxes.

These somewhat random items were the subject of three separate online stories that I had read. Yet, they all pointed out to me a very thought provoking principle: The fact that life is what you make of it.

A twist of fate

To most of us, twist ties are just short pieces of wire coated in a strip of paper or plastic. They represent a nifty solution to securely fastening the openings of our plastic bags or to hold together the carefully wound up wires of our favourite gadgets.

But for Reddit user, passivelyaggresiver, twist ties meant much more than that.
As a child, he used twist ties to create his very own collection of homemade toys which he called the Twist Tie Guys.

“We didn’t have much money growing up,” he shared on Reddit. “I made my own action figures and had epic battles, with my imagination.”

He has uploaded several albums worth of photos on Imgur (passivelyaggressiver.imgur.com) showcasing the toys he has made. They were pretty amazing, in my opinion.

I found it really refreshing to see that it isn’t the price of a toy that determines how much fun a kid can have with it. Most children nowadays depend on an expensive and sophisticated range of toys or the companion of a smart device in order to be entertained. However, all that’s really needed is just a healthy dose of imagination.

Meanwhile, at another corner of the Web, I came across the tale of Kevin Cotter.
Back in 2009, his marriage of 12 years fell apart, and when his ex-wife moved out, she left behind just one item for him: Her wedding dress.

Inspired by a conversation that he later had with his brother, sister-in-law and parents, Cotter decided to come up with a list of hilarious ways that the dress could be used and took photos to illustrate them.

By the end of it, not only had he coined 101 uses for the dress (myexwifesweddingdress.com/the-list) and had loads of fun in the process, he had even published a book. 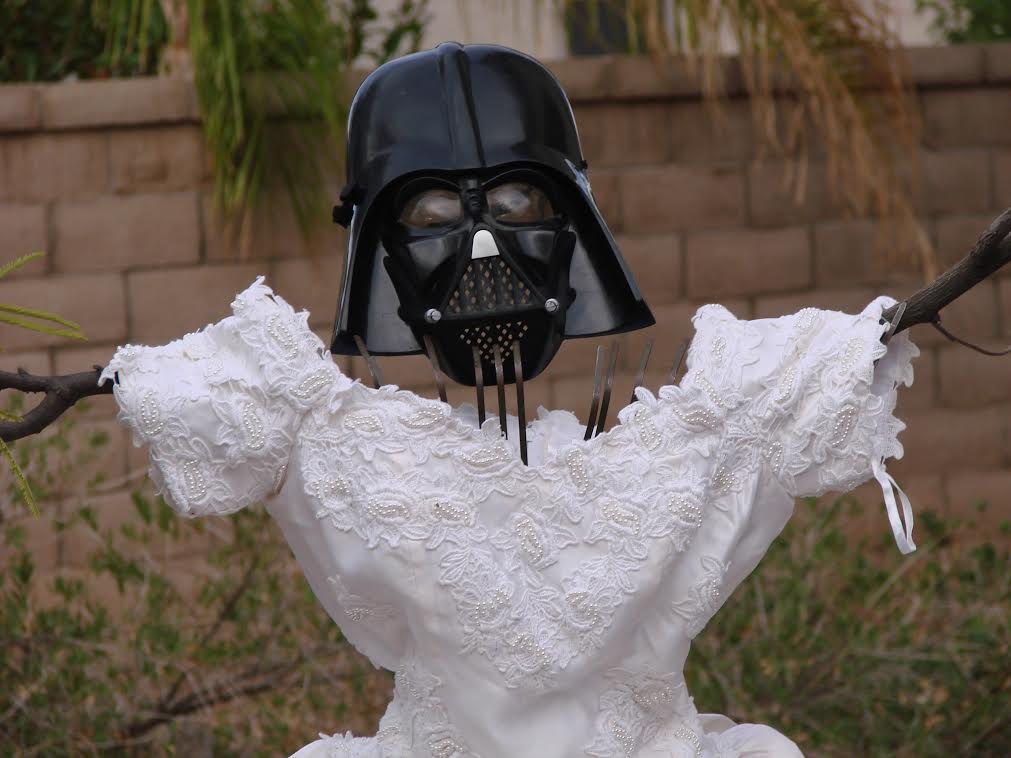 THE EMPIRE STRIKES BACK: Cotter decided to come up with a list of hilarious ways to use his ex-wife's wedding dress and took photos to illustrate them.

To top it all off, he has now remarried, and he and his wife recently celebrated the arrival of twin boys.

Personally, I don’t condone the concept of divorce or separation amongst married couples, but for some, it may be unavoidable, especially when one party has already given up on the relationship.

I can’t really comment on the reasonableness of Cotter’s situation since the details of what actually went down isn’t mentioned online, but what I can say is that his method of dealing with the loss was admirably positive.

Rather than staying bitter or wallowing in self pity, Cotter actually found humour amidst it all and took positive steps to move on with his life.

Thinking out of the box

The third story which had caught my attention online was that of a quirky family who decided to get creative with cardboard boxes.

Parents Lilly and Leon recreated scenes from their favourite movies using the “domestic junk” that they had accumulated as a result of relocating from New Zealand to Australia and having a baby.

This was, in their words, an attempt to make their “housebound weekends” a little more fun and interestingly enough, they even got their baby, Orson in on the act.

They compiled the photos of their creative masterpieces and posted it up on an aptly named website, Cardboard Box Office (cardboardboxoffice.com). Each photo comes complete with a really punny title which is certain to put a smile on your face if you’re familiar with the movies that they had depicted.

It’s intriguing to see how simple stuff like cardboard boxes could provide so many hours of quality time for this family. Most of us would probably expect to have to travel to far off places and to spend loads of cash in order to have a great time with our loved ones, wouldn’t we?

Not sure about what you might think, but I felt really glad to have stumbled upon these three tales at this time of the year. Often, when I get caught up in the complexities of life and technology, it’s easy to forget that it isn’t so much about what life brings me as it is how I choose to face it.

It is crystal clear from the stories of Kevin Cotter, Lilly and Leon, and Orson that not much is actually required in order to enjoy life. I will certainly keep this lesson in mind as I look forward to 2014 and start to make plans for what I hope to accomplish in the future. I hope you will too.

• Susanna Khoo is convinced that less is more, especially when a creative mind is on hand. Share with her your thoughts on twist ties, wedding dresses, cardboard boxes or any similarly inspiring every day objects at susanna@thestar.com.my.