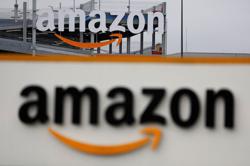 Integral to the “last mile” are Rivian’s electric-powered delivery vans, which have already launched in Boston, according to Amazon. — Photo by Andrew Stickelman on Unsplash

Massachusetts is now the home of some of Amazon’s newest employees, and they aren’t even human.

Amazon’s newly-opened Westborough BOS27 robotics facility is designed to speed up the delivery process for customers. It’s at BOS27 where the robots are designed, made and tested. Combined with North Reading’s facility, Amazon Robotics has produced more than half a million robots, Amazon Robotics vice president Scott Dresser told NECN.

One of those robots is Sparrow, Amazon’s first robotic handling system that can identify and move individual products using artificial intelligence, according to Amazon.

“Working alongside our employees, Sparrow will take on repetitive tasks, enabling them to focus their time and energy on other things, while also advancing safety,” Amazon said in a statement about Sparrow.

Sparrow was one of several robots on display during Amazon’s “Delivering the Future” event on Nov. 11 in Westborough. Press and spectators were welcomed to meet wheeled Hercules robots, Proteus robots for the warehouse and Sparrow’s sibling robotic arms, Robin and Cardinal.

Using a virtual neighborhood at the event, Amazon promoted some of the latest tech in the “last mile,” the final leg of a delivery that brings packages from a distribution center to customers’ doorsteps.

Amazon’s vice president of Last Mile Technologies Beryl Tomay told NECN that “last mile” is important during the holiday season for being “that final leg of the journey where a package gets to the customer’s doorsteps.” By 2030, Amazon projects 100,000 electric delivery vehicles will be on the road.

Amazon also featured its Prime Air drones, which include a reduced noise signature and a sense-and-avoid system that allows drones to operate across great distances and avoid obstacles, people, animals and aircraft. Lighter drones in development, specifically the MK30, are due to enter service at 2024.

Subscribe now to our Premium Plan for an ad-free and unlimited reading experience!
Robotics AI Technology