By Helen Coster and Krystal Hu 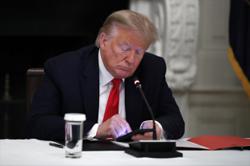 (Reuters) - Ever since former U.S. President Donald Trump launched a new media company aimed at rivaling Twitter, there has been a mystery over who provided the money. Trump didn’t. So who did?

Now there are some answers in a cache of documents provided by lawyers representing William Wilkerson, a former executive who filed a whistleblower claim with the Securities and Exchange Commission (SEC) against the media company and Digital World Acquisition Corp, the blank-check firm taking it public.

The documents show Truth Social’s early backers include six businessmen outside of the Silicon Valley mainstream — including two executives from an oil company and a gym chain, several Republican donors, a former U.S. ambassador to Portugal and the head of a mail-order fruitcake company.

The involvement of the previously unnamed financial backers of Trump Media & Technology Group (TMTG) – parent company of social media app Truth Social – shows how Trump tapped his political supporters to launch an outlet aimed at political conservatives and libertarians after he was banned from Twitter and Facebook following the Jan. 6, 2021 attack on Congress.

Representatives for former President Trump and TMTG did not respond to a request for comment about the investors named in the documents, which were submitted to the SEC and Department of Justice by Wilkerson, and other parts of this story.

Digital World Chief Executive Patrick Orlando and TMTG co-founders Andy Litinsky and Wes Moss, who are named in the whistleblower complaint, also did not respond to requests for comment.

The investors’ involvement in TMTG, gleaned from promissory notes dating from between May 2021 and mid-2022, provides new details on the venture which, as Reuters reported, has struggled to attract tech talent and corporate partners. The names have not been previously reported.

According to the documents, Karl Pfluger, president of Midland, Texas oil and energy company Oryx Midstream Services owned by private equity firm Stonepeak Infrastructure Partners, put in $5.3 million in December 2021 and an additional $4.5 million in March 2022. Pfluger is the brother of August Pfluger, a Republican Congressman in Texas and vocal Trump ally who first earned Trump’s endorsement in February 2020.

In a statement to Reuters, August Pfluger’s spokesperson said he doesn’t have a personal investment in Trump Media & Technology Group, adding: “He earned the endorsement of President Trump long before the creation of Truth Social.”

Patrick Walsh, chief executive of the holding company that controls luxury gym brands including TMPL, Palm Beach Sports Clubs, and LIV, invested a total of $6.2 million between December 2021 and February 2022. He had worked with Phillip Juhan, who was the financial chief at fitness chain operator Town Sports International Holdings until Juhan left to take on the same role at TMTG, according to a May SEC filing from DWAC.

Texas telecom billionaire Kenny Troutt, a vocal Trump supporter, invested $4 million through his money manager Nicholas Merrick between May and November 2021. He donated $200,000 to the Trump campaign in 2016, and another $925,000 to Trump’s 2020 re-election campaigns, according to publicly available campaign finance data.

Roy Bailey, the chief executive officer of Bailey Deason Capital Investments in Dallas, Texas and the national co-finance chairman of Trump’s 2020 re-election campaign, invested at least $200,000 between May and October 2021.

George Glass, an Oregon real estate developer and Trump fundraiser who served as U.S. Ambassador to Portugal during the Trump administration, invested $500,000 on Jan. 24, 2022. Another $100,000 was invested the same day by Bob McNutt, the chief executive officer of a mail-order fruitcake company in Corsicana, Texas. McNutt is a longtime Trump supporter.

The $22.8 million in financing from these backers – who operate largely outside the ecosystem of venture capital investors that tech startups often tap – is part of the $38 million of debt TMTG raised since May 2021, according to SEC filings.

TMTG launched Truth Social in February in the Apple App Store and in Google’s Play Store in October.

A year ago, TMTG announced a deal to go public by merging with Digital World Acquisition Corp (DWAC), a special purpose acquisition company (SPAC). The deal is now in doubt amid investigations by the Department of Justice and SEC, which have delayed its closing.

Details of the whistleblower complaint, based on the cache of documents seen by Reuters, were first reported by The Miami Herald and The Washington Post.

If TMTG’s deal with Digital World closes, TMTG would gain access to over $1 billion in cash from DWAC’s institutional investors, such as hedge funds. According to a services agreement dated Feb. 2, 2021, the former president controls 90% of TMTG.

Through a spokesperson for TMTG, the company’s legal department did not comment on the investors but said that Trump hired TMTG Chief Executive Devin Nunes, a former Republican congressman, to create a “culture of compliance and build a world-class team to lead Truth Social.”

SPACs are publicly-traded companies that are formed as a way for investors to pool their money with the intention of merging with a private company, which goes public through the merger.

The documents provided by the whistleblower’s attorneys also include four additional promissory notes collectively worth $9.4 million from entities whose identities Reuters is not able to verify.

TMTG fired Wilkerson on Oct. 13, claiming that he violated his non-disclosure agreement by sharing information with media outlets, according to a letter from a TMTG lawyer to Wilkerson, shown to Reuters by Wilkerson’s lawyers, Phil Brewster, Patrick Mincey and Stephen Bell.

Truth Social has seen surges of interest, but its user base remains tiny compared to the growth targets TMTG laid out in November, when the company told investors that the app would reach 56 million users by 2024 and 81 million by 2026. Truth Social has been downloaded 2.9 million times across both platforms, according to market tracker Appfigures. 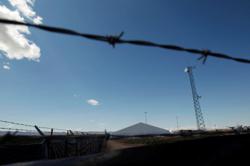 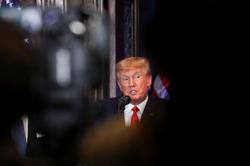