The police reminded the public that they would take action against people who allow their bank accounts to be used for money laundering. — Pexels

SINGAPORE: A 71-year-old Singaporean man who allegedly used his wife’s bank account to launder money linked to an Internet love scam was charged in court on Friday (Aug 5).

Lai Chee Keong is said to have owned five bank accounts that he used together with his wife’s account to facilitate the flow of ill-gotten funds from victims of the love scam.

On Sept 18 last year, officers received a report from one of the victims, who informed them that she had been duped into transferring S$4,950 (RM16,031) to an unknown bank account.

The woman had befriended an unknown person over social media who promised to send her a parcel containing money and jewellery.

Police investigations revealed that the bank account that she transferred money to belonged to Lai.

On Friday, the police reminded the public that they would take action against people who allow their bank accounts to be used for money laundering.

The police said: “To avoid being an accomplice to crimes, members of the public should always reject requests by others to use their bank accounts as they will be held accountable if the bank accounts are linked to crimes.”

For acquiring, possessing, using, concealing or transferring benefits from criminal conduct, a person found guilty can be jailed for up to 10 years, fined up to S$500,000 (RM1.61mil), or both.

The offence of possessing property reasonably suspected to be benefits of criminal conduct carries a jail term of up to three years, a fine of up to S$150,000 (RM485,795), or both.

For providing a payment service in Singapore without a licence, an offender can be jailed for up to three years, fined up to S$125,000 (RM404,823), or both. – The Straits Times (Singapore)/Asia News Network

Student in SG, 16, made to fake kidnapping for ransom in China officials’ scam 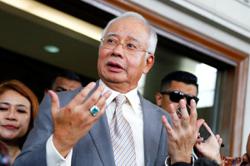