Amid electric vehicle boom, US seeks to flood ‘charging deserts’

US electric vehicle sales grew by 85% from 2020 to 2021, the government said in March, making the country the world’s third-largest EV market behind China and Europe – but also raising growing concerns about inequitable access to public charging. — AP

TEMPLE HILLS, Maryland: The electric vehicle charger had shown up at the park only a month earlier, but already Lonte was envisioning himself using it.

“It did catch my eye,” the 32-year-old said on a sunny June morning while preparing to exercise at a park in Prince George’s County, a majority-Black community outside Washington, D.C.

“It’s interesting that it’s branching out to our community,” he told the Thomson Reuters Foundation. “It may entice people to get more electric cars when they see it. I think it’s a great thing.”

Lonte, who declined to give his full name, said he hoped to buy an electric vehicle in the coming years, but could think of only one other public charging station, at an upscale waterfront development nearby.

That could soon be changing, in Prince George’s County and across the country.

US electric vehicle (EV) sales grew by 85% from 2020 to 2021, the government said in March, making the country the world’s third-largest EV market behind China and Europe – but also raising growing concerns about inequitable access to public charging.

“The rule of thumb in public charging infrastructure has been that, when installed by profit-seeking entities, they tend to head to where the money is,” said Dave Mullaney, who works on carbon-free mobility at the nonprofit Rocky Mountain Institute.

That has increasingly led officials and others to focus on eliminating “charging deserts”.

The Biden administration aims to spur the construction of a half-million new public EV chargers by 2030 – more than 10 times the current number.

This month it announced, among other programs, US$2.5bil (RM11.01bil) in spending aimed in part at increasing charging access in “underserved and overburdened communities”.

EVs “will be the only vehicle you can buy in the not-super-distant future”, he said, so unless the equity issue is addressed now, “the ability to charge them will be unequally distributed.”

Across the United States, the 20 areas with the most EV chargers had a median home price of nearly US$800,000 (RM3.52mil) – more than twice the national average, according to statistics cited in a report last year from the American Council For an Energy-Efficient Economy.

While numerous guides are available to cities and utilities on siting charging infrastructure, “few, if any” touch on doing so in low- and moderate-income communities, the report found.

Further, 88% of EV owners “often” or “always” charge their vehicles at their homes, according to a study last year from J.D. Power, a research firm – something difficult for those who live in apartment buildings, which make up nearly a third of US homes.

“Charging is different from traditional gasoline fueling in that the model is ‘charge while you park’ – let the car charge while you’re doing something, such as sleeping in your apartment building at night,” said Anthony Harrison, senior director of North American policy for ChargePoint, the world’s largest EV charging network.

“So if we want to engage people of all income levels to have access to charging while they’re sleeping at night, we need to move into not just single family but also multifamily spaces.”

Los Angeles now requires that 10% of parking spaces at multifamily and commercial buildings have charging installed and another 30% are capable of supporting such equipment in the future, said Lauren Faber O’Connor, the city’s chief sustainability officer.

Los Angeles has already surpassed a target to provide 10,000 new commercial charging stations, and is now aiming for 25,000 by 2025 – with over 60% of related installation rebate payments going to chargers at apartment buildings.

City agencies also are working on new ways to install charging on city property, from parking lights to parks and lightpoles, O’Connor said, noting that, “for a while, the L.A. Zoo was the most-used fast charger in the county.”

Still, with a federal goal that half of all cars sold by 2030 should be zero-emission, the United States will need 20 times more chargers than it has now, according to an April estimate from McKinsey and Company, a consultancy.

The United States will probably use a combination of the approaches, he said.

‘Great spot for a charger’

Urban areas are rich in potential charging spots, said Vanessa Perkins, who years ago purchased an electric vehicle only to realise there was no place to charge it near her Chicago apartment.

“There were plenty of (public) chargers in the richer neighbourhoods,” Perkins, now a charging activist, said with lingering exasperation. “And the suburbs had options, even though they have so much home charging.”

She started thinking about whether the small businesses she worked with in her job, focused on energy-efficiency improvements, could host chargers, as many had parking lots.

When she reached out, some expressed interest – as long as they did not have to cover installation costs.

Perkins and others in 2019 founded a nonprofit called Community Charging, and last year partnered with EVmatch, a network for sharing and renting private chargers, to win a small philanthropic grant to pay for five chargers to be installed in areas that lacked them.

“I drove around saying, ‘That would be a great spot for a charger’,” she recalled, saying she particularly looked for parking spaces on underutilised private property, such as coffee shops, strip malls, community centres and houses of worship.

Since then, Perkins said, the public discussion has advanced dramatically.

In July, the state of Illinois will start offering major incentives for installation of EV chargers, aiming to funnel 40% of its overall climate investments to low-income and other disadvantaged communities.

Such a change is coming to Prince George’s County, too.

Two miles from where Lonte exercised, a crew was digging holes for four EV chargers near a community centre, part of a state pilot project that will see 250 installed by the local Pepco utility.

Many will be put on county parkland, Pepco project manager Anne Elliott said, but also at libraries, commuting hubs and schools.

Eventually the plan is to have an equal number of chargers across the county’s nine districts, said Lauren Belle, a sustainability specialist with the Maryland-National Capital Park and Planning Commission.

“The demand for charging is expected to outpace the development of charging stations,” she said. “So we’re trying to help bridge the equity gap.” – Thomson Reuters Foundation 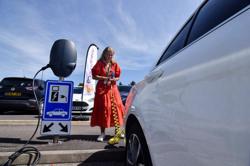