She also flouted Covid-19 rules by attending a birthday party with 13 others in July last year when the maximum group size for social gatherings was five.

She had pleaded guilty to one count each of threatening to distribute intimate images and breaching the Covid-19 (Temporary Measures) Act.

ALSO READ: SG man jailed 13 weeks for uploading on Facebook a photo of his wife having sex with her supervisor

The court heard that Zhang befriended the man through an online platform on June 1 last year. They met for meals and spent time in the apartment the man rented.

He gave her gifts and money as he liked her, and they video-called each other while nude or performing intimate acts.

Court documents did not state what she was working as at the time.

ALSO READ: Man in SG jailed 12 weeks for sending sex video of himself and his girlfriend to her cousin

On June 16 last year, the man sent a nude shot of himself to Zhang. It showed his face and private parts.

A few days later on June 21, the man blocked Zhang on WhatsApp and Telegram after his girlfriend confronted him about having an affair.

But he unblocked her soon after and told her that he would help with her agency fees.

On June 23, Zhang threatened to send his naked photo to his mother and girlfriend if he continued to ignore her.

She then sent text messages to the man’s mother and girlfriend asking to speak to them.

Alarmed by Zhang’s threats, the man made a police report.

For threatening to distribute intimate images, Zhang could have been jailed for up to five years, fined and caned.

The maximum penalty for breaching the Covid-19 (Temporary Measures) Act is six months’ jail and a fine of up to S$10,000 (RM31,742). – The Straits Times (Singapore)/Asia News Network

Jail for woman in SG who created fake persona on matchmaking website and cheated suitor of S$4,750 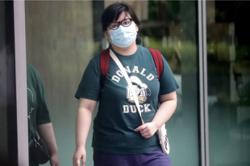 Politics, cash, fame: what motivates climate change deniers
Jail for woman in S’pore who cheated intellectually disabled man out of over S$39,000 in love scam
Climate disinfo surges in denial, conspiracy comeback
Cryptoverse: Big investors edge back to bitcoin
Sony slashes PlayStation VR2 headset output after pre-orders disappoint
When judge ordered US woman to post the truth about a fatal wreck, Facebook was not kind
Dog trapped in burning vehicle now safe, thanks to quick-thinking US Amazon driver
Vrbo is trying to crack down on Super Bowl parties in rentals
Girl in SG was 16 when she helped foreign scam syndicates as ATM runner
Self-driving semis focus of California rules, legislation