There’s no need to contact city hall to get your official papers in India, where citizens will be able to use WhatsApp to download digital copies of certain official documents. The messaging application has become so widespread in the country that the government has decided to use it to offer certain compatible services.

WhatsApp is a must-have in India, so much so that it has become the most popular messaging app in the country, with over 487 million users. That’s why Meta continues to boost and bolster its app in India by introducing new features and options. The latest is a collaboration with the government to allow citizens to access official documents directly in the app, such as insurance papers or driving licenses.

Users simply have to send a simple message saying “Hi” or “Namaste” to “9013151515” on WhatsApp to open their account. To implement this service, the government relied on its digital documentation service “DigiLocker” which allows citizens to digitize and store a copy of various administrative documents.

The “DigiLocker” service already has more than 100 million users and more than five billion documents have been issued so far, according to Abhishek Singh, the CEO of MyGov.

In India, Meta is continuing efforts to make its mark with WhatsApp by offering various services, especially regarding online commerce. Recently, Meta announced the launch of a cash-back campaign, offering users 11 rupees (US$0.14 or 62sen) if they send money to three different people via the app. Meta also rolled out its WhatsApp Pay online payment service to 100 million users in the country. – AFP Relaxnews

Report: iOS 10 and iOS 11 users can no longer use WhatsApp after Oct 24 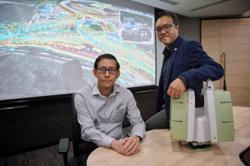 Inside Didi’s RM264.33bil crash that changed China tech forever
Renault limited to 44.4% stake in Nissan under agreement, filing shows
Buckle Up: How investors can deal with crypto turbulence
Working from a tropical island is the new working from home
Opinion: Tesla’s technoking of tumult caps a wild quarter with silence
Maxis says network is down, restoration work ongoing (Updated)
From crypto fraud to fake jobs and phishing, scamming attempts are on the rise on LinkedIn
Putting your phone on silent can increase stress, not lessen it, study says
U.S. SEC rejects Grayscale's spot bitcoin ETF
TikTok mums are spreading the word about sexual exploitation and reaching millions