Apple spent millions, but it couldn’t pull these San Jose residents out of homelessness 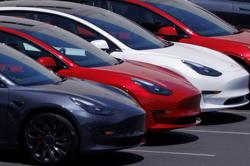 A group of homeless people that once camped on property owned by Apple – Deborah Kempkoble, Gary Nadeau, Rich Bebee, Bertha Iglesias and Ana Vazquez – are in their final week of a nine-month stay paid for by the tech company at a motel in San Jose, California. — Bay Area News Group/TNS

SAN JOSE, California: When Apple wanted to clear a large homeless encampment from its property last year, the tech giant didn’t just sweep everyone off the site – it spent millions of dollars to give dozens of people a nine-month motel stay and help them find housing.

Now, that nine-month motel reprieve is set to expire Monday, and while the wealthy tech company’s efforts have helped permanently house eight people, more than three times that many were still awaiting placements days before the deadline.

The situation, which has left multiple residents anxious about where they will go when the clock runs out, highlights just how difficult it is to pull people out of homelessness in the Bay Area – even for one of the world’s most valuable companies.

The Apple-funded programme faced a series of hurdles that are mirrored throughout the region: It struggled to find enough affordable housing, gain the trust of people who have spent years living outside, work through their arrests, addictions and other obstacles, and meet their medical, mental health and other complex needs.

The experience shines a light on why – even as voters consistently rank homelessness as the Bay Area’s number-one problem, Gov. Gavin Newsom has made clearing California’s homeless encampments a top priority, and the Covid pandemic has spurred a flood of new federal and state funding – encampments continue to line US streets. More than 6,700 people live without homes in San Jose alone, according to data released this month – up 11% from 2019. Santa Clara, Alameda, San Mateo and Contra Costa counties have all seen their homeless populations grow.

“We know (the motel) worked quite efficiently for some programme participants, and more time is needed for others,” Lori Smith, chief marketing and communications officer for nonprofit HomeFirst – which runs the Apple-funded programme – said in an email. “Each person has their journey into homelessness, and each will have their path out – and rarely will they look the same.”

Apple declined to comment on the programme specifically, but said “we’ve been working with partners across the state to support at-risk communities and provide new affordable units”.

What started as a few RVs parked on the side of a vacant lot that Apple owns on Component Drive in San Jose grew during the Covid pandemic into a large camp of dozens of people, vehicles, make-shift structures and trash.

The company, which in 2019 pledged US$2.5 billion to help fight the Bay Area’s affordable housing shortage and homelessness crisis, was left with the logistical and ethical challenge of how to handle the issue in its own backyard. Apple had the camp cleared in September and paid to put 56 residents up in a San Jose motel. The company also paid for a year’s worth of case management services to connect residents to long-term housing, mental health care, addiction services, and more. Neither Apple nor HomeFirst would say how much the tech company spent, though the nonprofit last year said it was “millions”.

Residents with RVs who declined a motel room were placed in a safe parking site in North San Jose, but that site was closed less than three months later after intense pushback from neighbours.

Last week, as the Monday deadline approached, 25 people still were living in the Casa Linda motel on Monterey Road and awaiting housing. HomeFirst hoped to have everyone placed by the time the motel programme ended, Smith said. If that didn’t happen, she said, residents would be offered emergency shelter beds.

Of those who already have left the motel, half moved into permanent or transitional housing – an apartment, a temporary tiny home or a family member’s house, according to Smith. She touted multiple success stories, including a mother and father who were expecting their first child when they left the encampment and now are living in an apartment with a healthy baby boy. More than a quarter of participants were connected to health care, Social Security or other benefits, and nearly all were put on housing waitlists, Smith said.

Ten people were forced to leave the programme early after getting arrested or otherwise breaking the rules.

Andrea Urton, CEO of HomeFirst, said Apple played a critical role in getting the motel residents housed or on a path to housing. But activist Shaunn Cartwright slammed the tech company for offering people the stability of a motel room and then taking it away. The motel stay has done wonders for residents’ physical and mental health, she said, and the programme should be extended.

“If they end up on the streets, that is entirely Apple’s fault,” she said. “That is Apple’s shame.”

HomeFirst is working to get some residents into one of San Jose’s five tiny home communities until they find long-term housing. But several motel residents distrust the tiny homes, worrying the rules would be too restrictive and the accommodations wouldn’t meet their needs. Two of the sites have shared bathrooms, which made some motel residents uncomfortable. One woman, who has two dogs, worried she’d have to give one up to accommodate the one-pet policy.

Others, like 65-year-old Bertha Iglesias, who makes intricate paper flowers in her motel room, said last week they hadn’t been offered any placement. Come Monday, she plans to move back into her trailer and park on the street near her mother’s house.

Richard Bebee, 50, had been living on the Component Drive site for years. When it was cleared, he said he was told he could get into permanent housing if he entered the motel programme. So he sold the truck he’d been living in and moved into the motel, hoping to get a commercial driver’s license and become a truck driver.

“I was so excited,” he said. Nine months later, he still hasn’t raised the money he needs to get the truck-driving training and take the driving test. Bebee said he’s been offered a place in a tiny home, but he doesn’t want it. “Now on the 23rd, I’m back here,” he said, gesturing to his car.

HomeFirst can only do so much to help people, Urton said.

“When we have a shortage of permanent housing options or people do not meet the criteria for immediate placement, that is all we can do,” she said in a message, “provide service, support, encouragement and allow them to make their own decisions.” – The Mercury News/Tribune News Service

How a once homeless US family became successful entrepreneurs

Crusading tech mogul aims to prove CEOs can be activists too