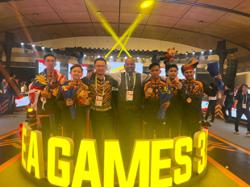 To ensure Malaysia’s esports team has its best shot at the upcoming SEA Games in Hanoi, athletes were chosen after they proved themselves on the virtual battlefield.

Kelvin Pang Ching Kuen, the team manager of the Malaysian esports contingent, said he decided to move the process away from a player draft to a national qualifier format.

“At the previous SEA Games, we would pick and choose the best players from various teams and hope they gel. However, I felt that brought up the issue of chemistry, and thought it better to use an elimination format to show which teams have merit,” he said, in an interview with LifestyleTech.

He added that the previous draft methods also caused complaints about the lineup, from coaches asking why their players weren’t chosen to fans complaining on online forums.

By having the players prove their prowess, it left no room for questions on whether the chosen teams are the best of the best.

“My answer is simple, I need to win the most medals and for that we need the best teams,” he said.

The national esports contingent selection was done through a closed national qualifier organised by the Malaysia Electronic Sports Federation (MESF), which ran from Feb 18 to March 7.

Asked if this approach would exclude smaller state teams by making them compete against pro esports teams that are often better supported and funded, he said state teams were given a fair chance to prove themselves.

“There are times for grassroot development, there are times we need elite players to win medals,” he said, explaining that though new talents should be encouraged, the relatively short notice for choosing teams for the SEA Games meant he needed teams with a proven track record.

However, he said one of the surprise qualifiers was Tabah NSEA, a team under the Negeri Sembilan Esports Association that edged out pro team Geek Fam in the PUBG Mobile esports title in the national qualifiers. Both teams would be representing the country for the game title, though for different medals.

“The Negeri Sembilan team understood how the pro league competition works, they spent the season (2020-2021) grinding their way up from lower leagues to the professional leagues,” he said, adding that the team was also reinforced by the addition of professional player Muhammad Izzrudin “Jumper” Hashim, who is a Negeri Sembilan native.

Pang announced during a press conference, held at the MSN Commonwealth Hall in Bukit Jalil on April 15, that 47 players were chosen and they would be accompanied by nine support staff including coaches and team managers.

This makes the esports contingent one of the largest at the SEA Games.

The coaches are also the team’s existing coaches, with Pang reasoning that he has full trust in the teams’ schedules and systems as they were professionals.

“I’m absolutely proud and confident that the athletes representing Malaysia for the six game titles will be able to hit our four medal tally target,” he said.

Malaysia is not sending representatives for first-person shooter CrossFire or for the women’s event for Wild Rift.

The four players representing Malaysia for multiplayer online sports simulation game Fifa Online 4 are also not included under MESF, instead being managed by the Football Association of Malaysia (FAM).

At the SEA Games in Manila, Philippines in 2019, Malaysia took home a gold medal in Hearthstone and bronze in Mobile Legends: Bang Bang. SEA Games 2021 will take place from May 12 to 23, 2022. 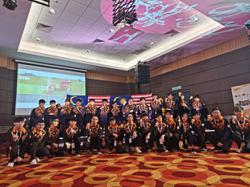