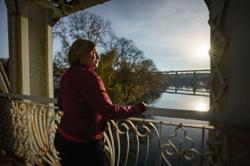 Dee Kosh gained popularity for his shows, which are often just him chatting to the camera or friends, and was also well known as a DJ at a local radio station.

But last year social media users accused the 32-year-old of asking them for sexual favours and to send nude pictures in private messages, with some posting screenshots.

He allegedly offered boys aged 15 to 17 money in exchange for sexual favours, they said.

He is also accused of making obscene films, and possessing obscene videos.

Koshy, who has 367,000 subscribers on YouTube, faces a lengthy jail term and hefty fines if convicted.

Police said they launched a probe after receiving reports of a man allegedly offering money in exchange for sexual services.

Police said they “take a tough stance against sexual crimes, particularly those that target vulnerable victims such as the young”.

He was placed on leave from the radio station after the investigation began.

In a statement posted on Instagram last year, Koshy denied some of the allegations but admitted “some truth” in the accusations.

He admitted that his text conversations with a 15-year-old were “problematic” and “inappropriate” but said there was no intent to groom the minor. – AFP