Mann Whyatt displays photos of her uncle, William Edward Mann, who died on the USS Arizona during the bombing of Pearl Harbor, at her home in Newcastle, Washington. In recent years, the US military has taken advantage of advances in DNA technology to identify the remains of hundreds of sailors and Marines who died in the 1941 bombing of Pearl Harbor and has sent them home to their families across the country for burial. The remains of 85 unknowns from the USS Arizona, which lost more men during the attack than any other ship, haven't received this treatment, however. — AP

HONOLULU: William Edward Mann enlisted in the Navy after graduating from high school in rural Washington state. A guitar player, he picked up the ukulele while stationed in Hawaii.

He’s been presumed dead since Dec 7, 1941, when Japanese planes bombed Pearl Harbor and set off a massive explosion that sank his battleship, the USS Arizona, launching the US into World War II.

Now, his niece is among some families of crew members who are demanding the US military take advantage of advances in DNA technology to identify 85 sailors and Marines from the Arizona who were buried as unknowns. They say the military has disinterred and identified remains from other Pearl Harbor battleships and should do the same for their loved ones.

“These men matter and they served. They gave their lives for our country. And they deserve the same honour and respect as any other service member past, present and future,” Teri Mann Whyatt said.

The Arizona suffered more loss of life than any other ship at Pearl Harbor, with 1,177 dead. More than 900 went down with the ship and have remained entombed there ever since.

As with remains on other sunken ships, the Navy considers those aboard the Arizona to be in their final resting place. The families are not advocating for them to be removed and identified.

The issue is what to do with the 85 Arizona unknowns buried in a Hawaii cemetery. It emerged in February when the director of the Defense POW/MIA Accounting Agency, which is tasked with finding and identifying the remains of US service members from past conflicts, was asked during a Facebook Live meeting when the agency would disinter them.

Kelly McKeague said his agency had spoken to the Navy about exhuming the Arizona unknowns and moving them to the ship without identifying them first. McKeague said it didn’t make “pragmatic sense” to identify them.

That outraged some families who feared the 85 remains would be placed on the sunken battleship without ever being identified.

The agency has since said it doesn’t plan to move the cemetery remains onto the ship. Rear Adm. Darius Banaji, the agency’s deputy director, said that was just a possibility discussed informally a few years ago.

Banaji also said the agency doesn’t plan to disinter the remains and try to identify them because it lacks sufficient documentation.

The military has files on just half of those missing from the Arizona, he said. Of those, it has medical records – listing age, height and other information – for just half. It has dental records for only 130 men. Some documents are believed to have been destroyed with the battleship. Others may have been lost in a 1973 fire at a military personnel records office.

And the military only has DNA samples from relatives of just 1% of the missing Arizona crew members.

McKeague told The Associated Press that what he said about identifications not being pragmatic referred to the lack of documentation, not the cost.

“We must apply our limited resources in a manner that is equitable to all families and to do so as efficiently and effectively as possible,” he said in a statement.

The agency, which aims to find more than 80,000 service members missing from World War II and on, has successfully identified unknowns from the USS Oklahoma, another battleship that capsized during the Pearl Harbor bombing.

In 2015, the agency dug up the remains of 388 Oklahoma sailors and Marines from the National Memorial Cemetery of the Pacific, the same graveyard where the Arizona unknowns are buried.

It acted after the military drafted a new policy allowing the disinterment of groups of unknown servicemen if it expected to identify at least 60% of the group.

The agency had dental records, age and height information for the vast majority of the Oklahoma unknowns. The military also had family DNA samples for more than 80%.

The agency predicted it would identify 80% of the Oklahoma remains, which were buried comingled in 61 caskets. As of this month, it has identified 344, or 88%, and anticipates naming more.

A group of families led by Randy Stratton, whose father, Donald Stratton, suffered severe burns as a sailor on the Arizona but lived to be 97, has drafted a petition demanding that the agency identify the 85 Arizona unknowns.

He’s vowed to help families submit DNA samples. He’s also been pushing for the agency to use genetic genealogy techniques like those used by law enforcement to solve cold cases.

Stratton said about 30 to 40 families of Arizona unknowns have joined him.

From a scientific perspective, there isn’t much stopping the military from identifying the Arizona remains, said Michael Coble, associate director of the Center for Human Identification at the University of North Texas.

“It’s definitely going to be a huge undertaking. But I think the technology has evolved that this kind of work could be done,” said Coble, who was chief of research at the Armed Forces DNA Identification Laboratory from 2006 to 2010.

The lab, which dates to 1991, has long used DNA to identify remains for the military.

One newer method uses so-called SNPs, which are unique to an individual – except for identical twins – and provide a kind of fingerprint. The lab hasn’t been able to make much use of this technique because it’s been unable to obtain adequate SNP profiles from degraded remains. Last month, however, it completed a project to get those samples.

This technique would help the lab distinguish between individuals even when it’s only able to extract tiny fragments of DNA. SNPs are the same type of DNA sample that services like Ancestry.com and 23andMe use to help match people with long-lost relatives or learn their propensity for certain diseases.

DNA profiles from this technique could theoretically be used for the kind of investigative genetic genealogy work that Stratton advocates.

Tim McMahon, head of DNA operations for the Defense Department, said researchers could take samples that failed to find matches in the lab’s in-house database and upload those to publicly available, private-sector DNA databases to look for potential cousins or other relatives. Genealogists could then study marriage licenses, birth records and other documents to make closer potential matches, which would then have to be confirmed with additional DNA tests.

Using such databases raises privacy concerns because relatives of the missing may not want their family’s genetic information shared. The military would need to develop policies to protect privacy – for example, by potentially allowing researchers to upload an anonymous DNA profile of an unidentified serviceman.

But first, the Defense POW/MIA Accounting Agency would have to decide that it wants to identify the Arizona unknowns.

For Stratton, it would be worth it.

“Why wouldn’t you want to find out who these guys are?” Stratton said. – AP 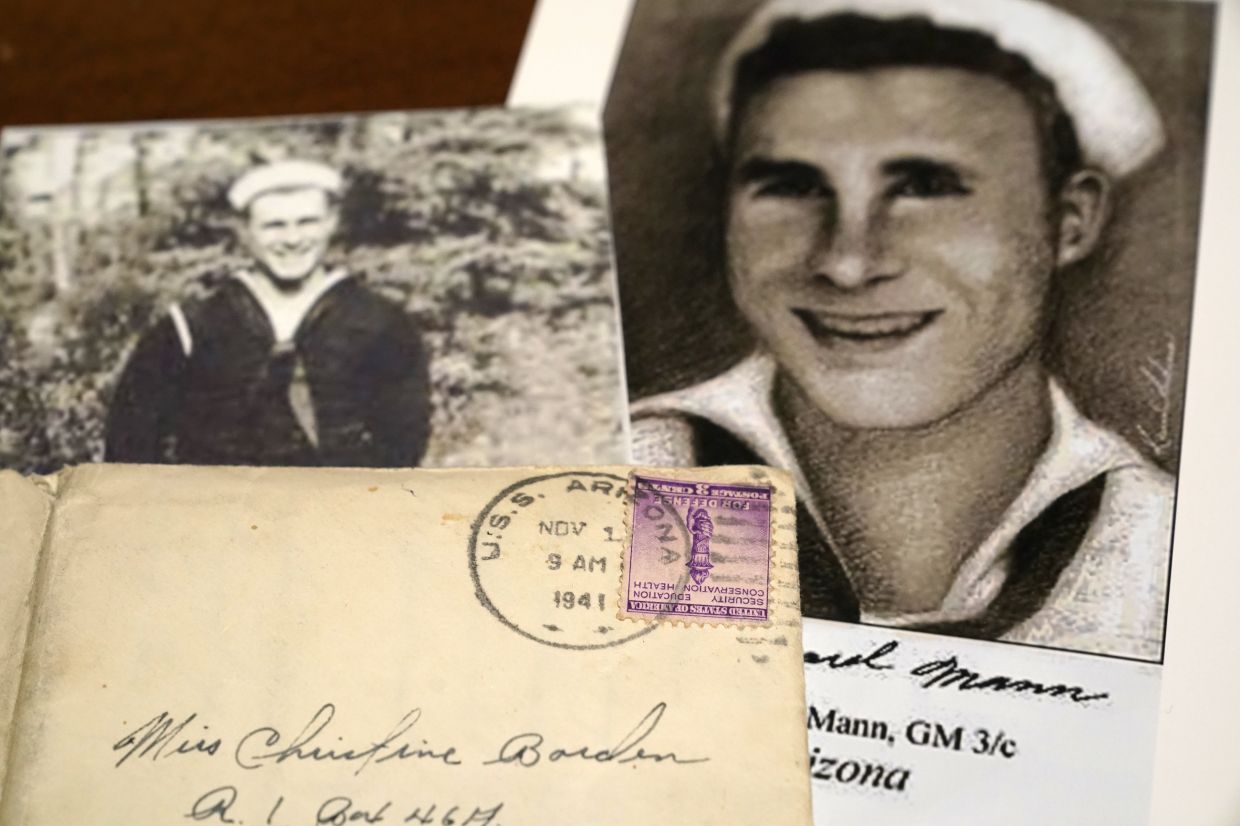 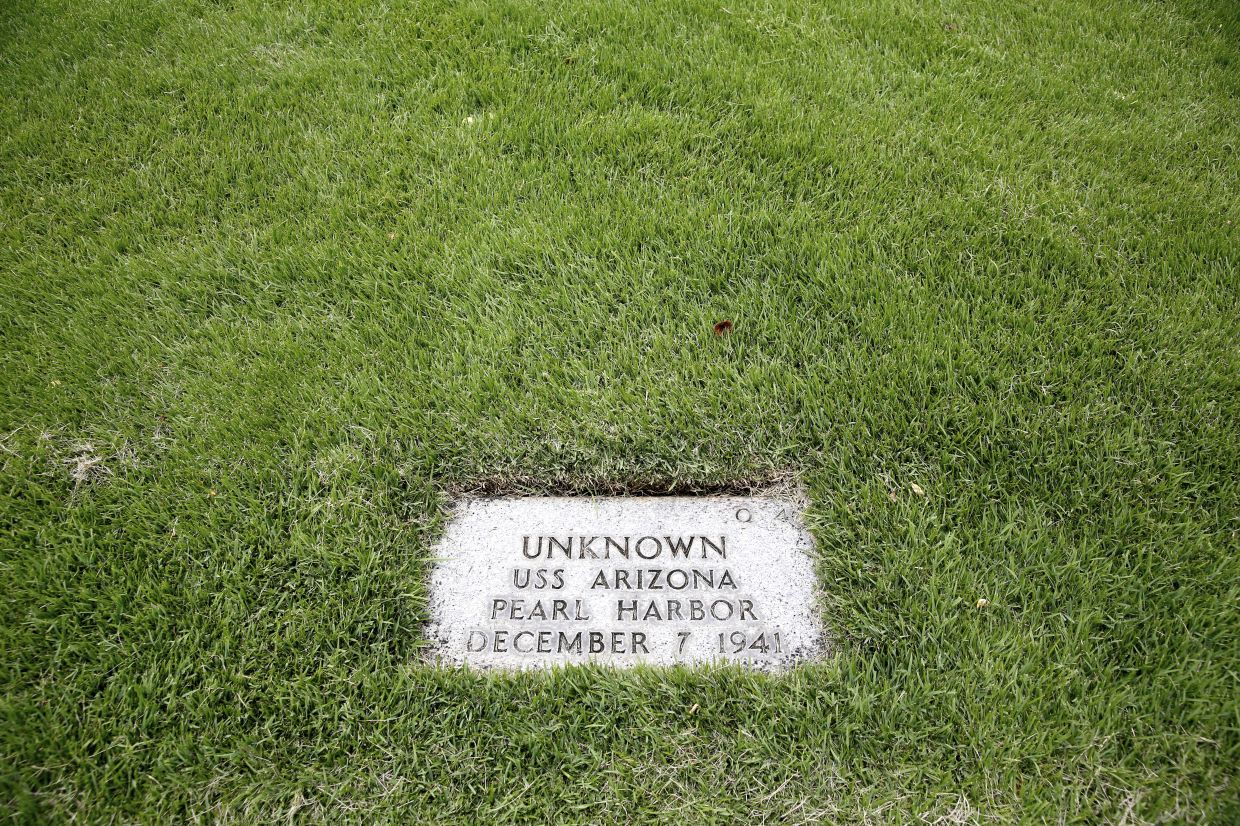 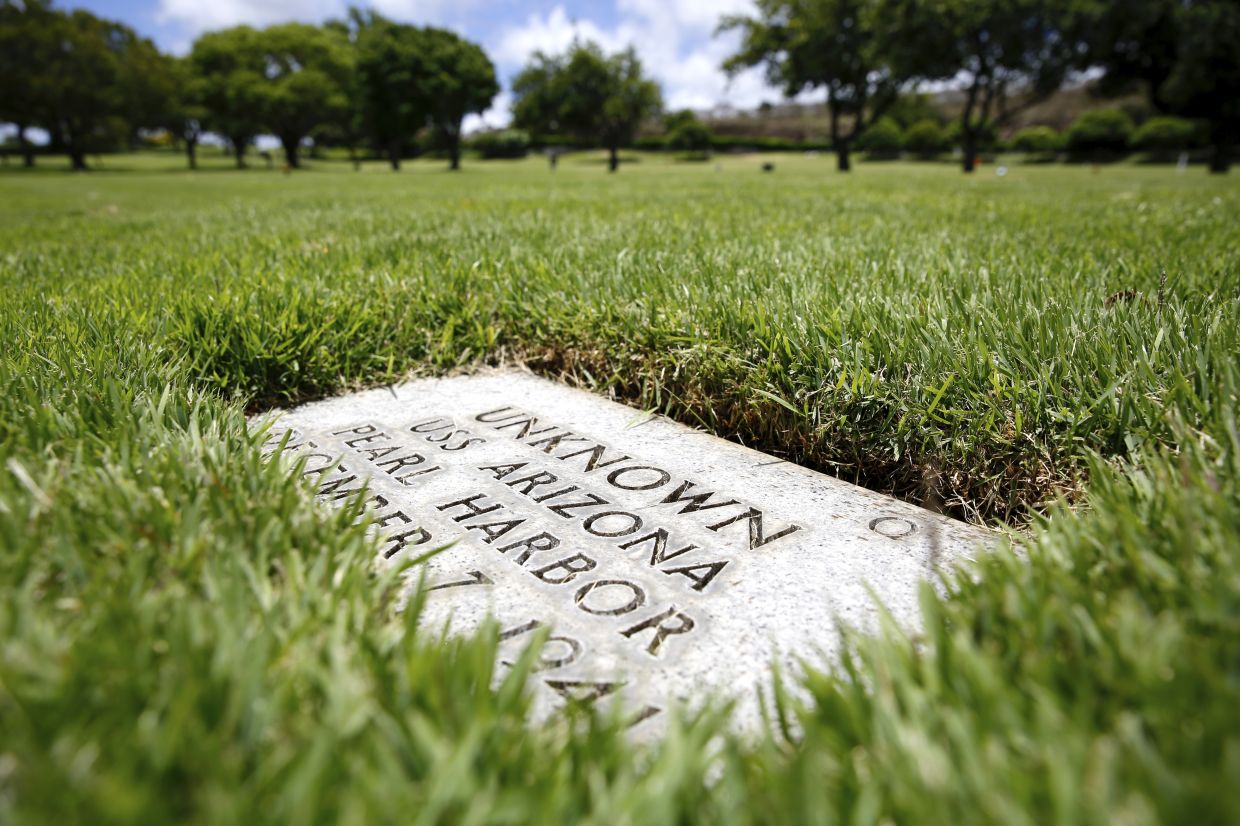 Mann Whyatt displays photos of her uncle, William Edward Mann, who died on the USS Arizona during the bombing of Pearl Harbor, at her home in Newcastle, Washington. In recent years, the US military has taken advantage of advances in DNA technology to identify the remains of hundreds of sailors and Marines who died in the 1941 bombing of Pearl Harbor and has sent them home to their families across the country for burial. The remains of 85 unknowns from the USS Arizona, which lost more men during the attack than any other ship, haven't received this treatment, however. — AP

Photos of sailor William Edward Mann and a letter written from him and post-marked from the USS Arizona, where he died during the bombing of Pearl Harbor, are displayed at the home of his niece, Teri Mann Whyatt, in Newcastle, Washington. — AP

A grave marker for an unknown casualty from the USS Arizona is shown at the National Memorial Cemetery of the Pacific in Honolulu. McKeague told The Associated Press that what he said about identifications not being pragmatic referred to the lack of documentation, not the cost. — AP

A grave marker for an unknown casualty from the USS Arizona is shown at the National Memorial Cemetery of the Pacific in Honolulu. Advances in DNA technology have allowed the US military to exhume and identify the remains of hundreds of sailors and Marines buried as unknowns from the bombing of Pearl Harbor, decades after the 1941 attack that launched the US into World War II. But the Defense POW/MIA Accounting Agency says it won't be able to do the same for those from the battleship that lost the most men that day: the USS Arizona. — AP