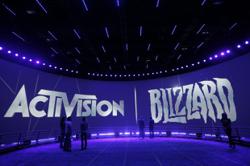 Activision Blizzard employees are planning a walkout in protest against sexism at the US video game company and a poor response from its executives. — Activision

Employees at Activision Blizzard planned a work stoppage on Wednesday to protest sexism at the US video game company, according to a rallying cry echoing on social media.

The Activision Blizzard Walkout for Equality is to last through the work day, with a live event during lunch hours at the firm's campus in the Southern California city of Irvine.

Organisers expected about 50 people to take part in the campus protest, with others joining virtually due to the Covid-19 pandemic.

The California Department of Fair Employment and Housing filed a civil complaint last week claiming the maker of "Call of Duty" and "World of Warcraft" violated state laws by allowing a "pervasive frat boy workplace culture."

In the latest case highlighting claims of sexism in the video game industry, the lawsuit said the company "fostered a sexist culture and paid women less than men."

"It is the responsibility of leadership to stamp out toxicity and harassment in any form," Activision Blizzard chief and co-founder Mike Morhaime said in a post over the weekend.

"To the Blizzard women who experienced any of these things, I am extremely sorry that I failed you."

Morhaime acknowledged in the post that harassment and discrimination are prevalent in the video game industry.

The call for a walkout came as workers blasted Activision Blizzard's response to a slew of sexism and harassment complaints in a letter calling its reaction "abhorrent."

Employees at the company demanded that executives "recognise the seriousness of these allegations and demonstrate compassion for victims," according to the letter posted online.

The letter had been signed by more than 2,000 employees by Tuesday, according to media reports.

Activision Blizzard pushed back on the allegations, saying that the lawsuit "includes distorted, and in many cases false, descriptions of Blizzard's past."

"In cases related to misconduct, action was taken to address the issue," it said.

The game company said the state agency "rushed to file an inaccurate complaint, as we will demonstrate in court."

Law firm Scott and Scott this week said it is exploring whether stockholders have grounds to sue Activision's top managers or board of directors for breach of fiduciary duties in their handling of sexual harassment.

"If you are an Activision shareholder, you may have legal claims against Activision's directors and officers," the litigation firm said in a release. – AFP

Behind the unbridled success of video games, the harsh reality of the industry’s working conditions