I see peach, you see... something else: top emojis causing confusion

In online chats without body language, emojis are crucial. But linguists say many of these symbols have meanings and variations we don't always realise. — dpa

By now most of us know to be careful with the fruit and veg section.

These days an aubergine in a chat app is rarely just an aubergine, and the peach and banana emojis have also long since implied certain bodyparts.

Some, like the classic smiling face or the extremely popular "tears of joy" emoji, are universally recognised by everyone and relatively undisputed.

But experts say that for a lot of other smileys, the meaning can be somewhat misleading. You might think that one of the biggest advantages of emojis is that everyone understands them, no matter your age or where you come from.

Linguists say that's not always the case, and that multiple conflicting meanings are often attributed to one emoji – even within the same culture.

The tired cat and the helpful service worker

Take the cat with the wide-open mouth for example. It's frightened by a dog, right? No, it's really intended to mean weary. Meanwhile that face with wide eyes and red cheeks is not meant to express surprise or astonishment but embarrassment.

The person tipping their hand by their shoulder was originally called "information desk person," and is supposed to depict someone happy to help. Instead, the emoji is now commonly used to express sarcasm or if you want to say "I don't care". And the bright red, scowling face looks angry, but is supposed to represent sulking or pouting.

But who actually determines these officials meanings, if not the people who use the emojis?

The non-profit Unicode Consortium, which is responsible for the development and standardisation of emojis, also provides information on how the images should be used correctly.

Of course you don't have to go along with their original intentions. And yet: "There are a number of emojis that can lead to conflict. You can put your foot in your mouth very quickly," says linguist Steffen Pappert from the University of Duisburg-Essen.

For example, the emoji in which the index finger and thumb touch to make an open circle. "In many cultures this represents an OK sign, but in other countries it can be seen as offensive," explains the expert.

If you are unsure about the use of some emojis, you can read up on their meaning at Emojipedia.org or else copy and paste the emoji into a search engine.

Even though "emoji" and "emoticon" (a pictorial representation of a facial expression using characters) contain the prefix "emo", the word, which originates from Japan, has nothing to do with "emotion". Translated, it simply means "picture character". Since the small pictograms originated in Japan, misunderstandings can arise, especially due to cultural differences.

The face with little clouds of steam coming out of the nose looks irritated. "In Japanese culture, however, it is understood quite differently, namely as triumph or victory, but in other cultures it is likely to be understood as anger or a bad mood," says Pappert.

Even the little pile of poop with a big, friendly smile is not interpreted the same way everywhere. "In Japan, people send this emoji when they want to wish someone good luck, similar to a four leaf clover," says linguist Christa Duerscheid from the University of Zurich.

It's not just the cultural use of some emojis that differs. The pictograms look different on Google, WhatsApp, Facebook, Twitter and depending on your smartphone's operating system.

So if someone sends an emoji with an iPhone, if the recipient has a Samsung smartphone they may get a different impression than what the sender intended. – dpa

Which are the most popular emojis? And some you might want to avoid... 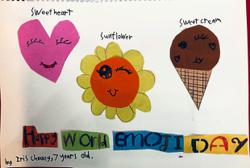