AI and the jobs of tomorrow

Educational institutions are equipping students with the knowledge and tools to work in the field of AI, a fast-growing and quickly evolving industry. — School vector created by vectorjuice - www.freepik.com

Hoping to pursue an economics degree overseas, Luqman Fairus looked forward to a bright future but life had other plans for the 18-year-old.

The pandemic had made him rethink about travelling abroad, forcing him to reassess his plans for the future.

A suggestion from a family friend who worked in a financial tech firm pushed Luqman to look into the field of computer science and artificial intelligence (AI). Curiosity piqued, he enrolled in a two-month long Applied Deep Learning course.

Developed by Malaysian AI firm Skymind, it is taught at the technology educational institute Forward School in Georgetown, Penang.

As Luqman lived in Petaling Jaya, Selangor, he had to travel every weekend for the in-person classes, just narrowly completing it before the first movement control order (MCO) in March last year. The restrictions brought about by the pandemic led Luqman to pursue a career in AI. — LUQMAN FAIRUS

Forward School founder and CEO Howie Chang said the school caters to students looking for a job in a tech startup and those already working but looking to pivot, colloquially called “lane-changers”.

“Forward School is an alternative tech school with a tertiary pathway based on Technical and Vocational Education and Training (TVET).

“AI is definitely going to be the future, as there are many applications and use cases for it now,” he said.

Chang said more businesses are depending on AI to solve problems previously worked out by humans.

“Eventually, the software of the future will be AI-powered. For example, we can see how Tesla is using AI to achieve its mission for autonomous driving in the transport world,” he said.

Another notable change is in the types of jobs offered to graduates and lane changers.

“These jobs were largely unknown 10 years ago unless you were very involved in the R&D world,” said Chang, who has been teaching IT and design for more than a decade.

Occupations that have emerged include: AI data analysts who collect, clean and interpret data; big data engineers who develop systems that make use of large datasets; and data scientists who identify problems that can be solved using data. Other vocations include machine learning engineers who build and maintain an AI program and train it to run independently; and business intelligence developers who use AI tools to identify business trends and devise strategies based on them.

Luqman said he wasn’t even aware of such courses when he was growing up.

“I was interested in politics and economic affairs, and was considering a career out of them. Looking back, the pandemic helped in a way, as it led me to the AI industry and there’s so much to learn.

“I’m quite decided now: I like economics as a hobby, but see IT as my true calling, hopefully until I retire,” he said.

He added that in the current job climate, being in the IT industry felt very reassuring.

“It’s somewhat comforting but also very challenging since it means always doing something new, being at the frontier,” he said.

IBM’s Global AI Adoption Index 2021, a study that interviewed IT professionals from 5,501 companies around the world, found that 43% of businesses were accelerating their use of AI due to the pandemic.

These businesses turned to AI to make more informed decisions faster by harnessing tools that automate managing large and complex amounts of data accumulated over time. IBM’s Global AI Adoption Index 2021, a study that interviewed IT professionals from 5,501 companies around the world, found that 43% of businesses were accelerating their use of AI due to the pandemic. — 123rf.com

Despite the demand for AI solutions, there is still a gap as there aren’t enough people with AI skills to take on the work, it said.

Companies also reported that limited AI expertise or knowledge (39%), followed by increasing data complexity and data silos (32%) are some of the issues they are facing. Data silos occur when data collected by one division of a company is not shared with others.

To solve their need for AI solutions, companies are adopting investment strategies, including reskilling and workforce development (34%).

This meant companies had to either train their employees to understand AI or hire new staff with the relevant skill sets. However, beyond just adopting AI solutions, IBM said companies needed to effectively plan what they wanted to do with the tools in order to gain customer trust, maintain brand integrity and meet regulatory compliance.

Again, the biggest barrier was cited as “lack of skills or training to develop and manage trustworthy AI”, which it said is affecting 65% of businesses.

Catherine Lian, IBM Malaysia managing director, said the firm has made available a new online resource, Open P-Tech, for teachers and students to equip them with foundational knowledge on topics like AI, cybersecurity and Cloud computing.

“Open P-Tech awards badges recognised by IBM and industry players as an endorsement of acquiring a certain skill set.

“We believe AI and Cloud computing will lead the digital transformation journey in Malaysia,” she added.

The country faces a persistent and underlying problem – skill mismatch – even though an estimated 21% of Malaysia’s GDP will be digitalised by 2022, said Lian.

“A strong partnership and collaboration between the public and private sector is crucial to bridge the digital talent gap in Malaysia,” she added.

According to University Malaya’s Faculty of Computer Science & Information Technology (FCSIT), AI was offered as a major for its Computer Science discipline from 1998 before it became a separate programme from 2010. Its dean Prof Datin Dr Sameem Abdul Kareem said the subjects are accredited by the Malaysian Qualifications Agency (MQA) while the syllabus is based on the curricula recommendations of the Association for Computing Machinery (ACM), adding that the syllabus has been benchmarked against top global AI institutions.

To ensure the curriculum stays current, it will be reviewed once in five years by experts from the industry and its alumni from the Curriculum Review Committee.

“Like all rapidly developing disciplines, there is a limit to what we can provide the students within a period of three and a half years.

“Our students are equipped with a strong foundation and critical thinking skills and will be able to adapt to the needs of the industry even if they encounter something that they were not taught before,” she said.

To ensure courses reflect the reality of the industry, FCSIT also invites experts from the industry as guest lecturers for some of the AI courses.

“Feedback from the industry is also obtained when we send our students for internship programmes,” she said.

Though some students who enrolled for AI courses had basic programming skills, those that don’t won’t be left out, said UM’s Assoc Prof Dr Norisma Idris.

“Sometimes it is better to start with a blank canvas. What would be more important is for the student to have strong logical thinking skills and foundation in mathematics as there is a lot of prediction, probability, logic and linear algebra in AI,” she said.

Norisma, FCSIT Artificial Intelligence department head, noted that most academics in the AI department were from an era that didn’t have computer classes in schools.

“For some of us, we first saw and used a computer as undergraduates. We have come to accept that students joining the programme may not have taken a computer science course before.

“Our programmes are developed with this in mind,” Norisma assured.

However, Asia Pacific University (APU) deputy vice chancellor Prof Dr Vinesh Thiruchelvam felt there should be more awareness on the applications of AI in secondary schools, suggesting that case studies or mini projects should be included in science and math subjects. Vinesh says secondary schools should offer classes on AI to give students a head start in a field that’s becoming more promient. — APU

He said the focus should be on core areas such as data analysis and introduction to algorithm designs.

Most institutes of higher learning, he said, also employ an Industry Advisory Panel (IAP) made up of industry practitioners who offer updates on employment requirements, including sought after skills, as well as what are the latest hardware and software.

Students in secondary school are also now exposed to computer science and coding, according to Lian.

“For older generations that have missed this, the reskilling and up-skilling programmes will be beneficial because tech talents can come from all ages of the community. AI education is suitable for anyone, with or without a tertiary degree,” she said.

Private school AI Academy is hoping to start children at an early age by introducing them to computer science, including the topics of programming, robotics and AI.

Its chief operating officer Govindan Nair said the courses are offered as an extracurricular activity and takes three hours over two days. It is an associate company to the Orbix International Schools and Orbix Education Group, which has campuses in Klang, and Batu Pahat and Muar in Johor. It provides AI related syllabus for primary and secondary schools.

The syllabus was developed by China AI-firm iFLYTEK, which Orbix worked with to make the content relevant to the local market.

“Our approach to AI in education at school level is quite different compared to a university.

“At school level, students have limited knowledge in maths and the constraint in class hours necessitates the need to prolong the course over a long period of time spanning nine years,” he said.

He added that this helps the student to adapt to the knowledge as they grow and find new ways to adapt the technology into their life.

Govindan said the approach the institution is taking is based on “experience, understand and create”. 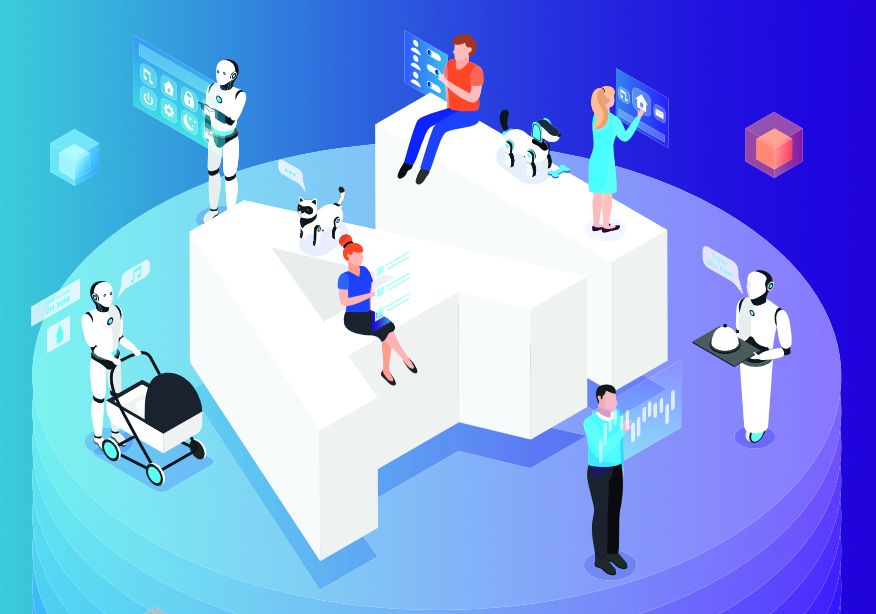 Private school AI Academy is hoping to start children at an early age by introducing them to computer science, including the topics of programming, robotics and AI. — Food vector created by macrovector - www.freepik.com

Secondary level students get an expanded course on these subjects and are encouraged to develop and create various applications and also participate in AI competitions.

“To ensure a smooth learning process, we have invested heavily in dedicated AI learning labs.

To ensure students enjoy attending classes, the syllabus is designed not to put additional stress on children, he said, adding that there are no exams and instead their competencies are judged through project- based activities and skills-based assessments.

“Approaching them at this age helps them to adapt to abstract thinking and grows their creativity,” he summarised.

Forget cameras, this carpet detects the presence and movements of people

From Mars to the moon: the computer system behind China’s space missions

Can AI predict how sick you’ll get from Covid-19? Scientists think so