The focus on Gates comes amid heightened scrutiny of sexual harassment and misconduct in the tech sector and the #MeToo movement which has already led to the downfall of a number of powerful men. — AFP

WASHINGTON: Bill Gates’s tenure at Microsoft has come under fresh scrutiny amid revelations that the tech giant probed the billionaire founder’s intimate relationship with a staffer before he left the board of directors.

The latest news, days after Gates and his wife Melinda announced their divorce, could have major repercussions for the tech founder who has cultivated an image as one of the world’s most dedicated philanthropists.

Recent reports suggested a streak of questionable behaviour by the 65-year-old Gates, one of the most prominent members of the US business elite who has been the target of conspiracy theorists over his funding of the development of Covid-19 vaccines.

Microsoft confirmed reports over the weekend that its board began an investigation with an outside law firm of an affair with an employee.

“Microsoft received a concern in the latter half of 2019 that Bill Gates sought to initiate an intimate relationship with a company employee in the year 2000,” a company spokesperson said.

But Gates has denied that the relationship prompted him to leave the Microsoft board last year.

A spokeswoman for Gates told the Wall Street Journal: “There was an affair almost 20 years ago which ended amicably.”

She added that Gates’s decision to “transition off the board was in no way related to this matter”.

Other reports pointed to meetings between Gates and Jeffrey Epstein, a convicted sex offender who died by suicide while awaiting trial on trafficking charges.

Gates’s team assured the board the Microsoft founder had met Epstein for “philanthropic reasons” and “regretted doing so”, the Journal said.

The New York Times reported that Melinda Gates expressed dismay over her husband’s meetings with Epstein but that Gates continued to meet him.

The Times reported Melinda Gates was also upset over a private settlement of a sexual harassment claim against her husband’s financial manager, and about Gates’s advancements toward other Microsoft employees.

The focus on Gates comes amid heightened scrutiny of sexual harassment and misconduct in the tech sector and the #MeToo movement which has already led to the downfall of a number of powerful men.

While none of the reports have suggested sexual misconduct by Gates himself, his actions and associations have nonetheless tarnished the image of a man long respected and admired.

“On the one hand, Americans disapprove of infidelity. So, his image will take a hit,” said Alicia Walker, a Missouri State University professor and author of Chasing Masculinity: Men, Validation, And Infidelity.

“On the other hand, folks tend to overlook men’s infidelity as expected. This is especially the case for rich and powerful men.”

According to the Times report, Melinda Gates hired divorce lawyers in 2019 to set in motion the breakup when revelations surfaced about her husband’s relationship with Epstein, who had been awaiting trial on criminal charges when he was found dead, in what was ruled a suicide.

Gates co-founded Microsoft in 1975, building it into the world’s most valuable company. He stepped aside as chief executive in 2000 and as chairman in 2014. He remained a board member until last year and has continued as a technical advisor to CEO Satya Nadella.

He and his wife, who co-founded the Bill & Melinda Gates Foundation two decades ago to battle global poverty and disease, announced their divorce on May 3 after 27 years of marriage.

The breakup has raised questions about the future of one of the world’s richest charitable foundations with 1,600 staff members and which provides some US$5bil (RM20.62bil) each year in areas like global public health and development.

Gates himself has become a leading figure speaking out against climate change and promoting science-based solutions to the coronavirus pandemic, while becoming the target of conspiracy theorists who claimed he knew in advance about Covid-19. – AFP 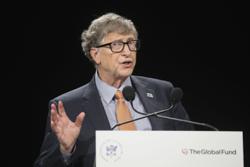