Internet, the thorn in the side of Cuba’s one party state

Boys wearing face masks with the US flag connect to the Internet in a street of Havana. For Cuba’s 11.2 million people who have long been amongst the least connected people on the planet, the Internet has become a favourite tool of the outlawed opposition. — AFP

HAVANA: Cuba’s communist leadership has always viewed the Internet with suspicion while trying desperately to control it.

Raul Castro, the former president and leader of the Communist Party, who officially retired on April 19, has blasted the medium for “lies”, “manipulation” and “subversion”.

But for Cuba’s 11.2 million people who have long been amongst the least connected people on the planet, the Internet has become a favourite tool of the outlawed opposition.

President Miguel Diaz-Canel was originally a fan and encouraged the “informatisation of society”, but he’s quickly become disillusioned with the Internet, faced with its enthusiastic use to criticise authorities.

On Monday, while 300 delegates met for the Communist Party congress in Havana, an amateur video went viral on social media.

It showed dissident artist Luis Manuel Otero Alcantara being arrested in a poor neighbourhood of the capital.

Dozens of activists, independent journalists and artists have complained on Twitter that police are preventing them from leaving their homes – a favourite ploy by authorities to prevent mass gatherings that could lead to anti-government protests.

Others complained of their Internet and telephone lines being shut down.

“There is a struggle going on in Cuba over the control, direction and impact of digital technologies, and it’s not clear how that is going to end,” said Ted Henken, American sociologist and author of the upcoming book Cuba’s Digital Revolution.

“After they made digital technology available via 3G cellphones, movements or mobilisations that were both offline and online increased and they happened more frequently,” he said.

“And then we saw after November that they had more and more of a real impact and provoked a very strong response from the government.”

In November 2020, the San Isidro Movement – artistic dissident voices led by Luis Manuel Otero Alcantara – hunkered down in a house together, calling for the release of a rapper while streaming their demands on Facebook, even attracting an international audience.

After the group was removed, some 300 artists protested opposite the Culture Ministry following calls spread on social media to demand freedom of expression – something unprecedented in Cuba.

For Raul Castro, Washington is to blame.

“Don’t forget that the US government has created a working group on the Internet in Cuba which aims to convert social media into subversion channels,” said Castro.

The US Department of State set up the Cuba Internet Task Force in 2018 to examine the challenges and possibilities of expanding Internet use in Cuba.

“However, the truth is something else, the internal counter-revolution, which has no social base, leadership or ability to mobilise, has ever-fewer members and social impact actions, concentrating its activism on social media and the Internet,” said Castro.

Not all artists are in favour of the proliferation of Internet activism.

“The enemy should make no mistake... here the revolution is not on social media, it’s in the streets,” said veteran poet Miguel Barnet, who was at the party congress.

Even so, the Communist Party adopted a resolution to strengthen “revolutionary activism on social media”.

Last week the Council of State approved a new decree to regulate telecommunications aimed at “defending the socialist State’s successes”, although it didn’t give further details.

Several times over the last month, Twitter has suspended media accounts of official Cuban bodies for infringing on “manipulation” rules.

For ex-diplomat Carlos Alzugaray, the government using the Internet as a “propaganda instrument” is unwise.

“Often on the Twitter accounts of ministers, it’s just a repetition of what is said on the president’s account.”

Michael Bustamante, a professor at Florida International University, says the government needs to be wary of ignoring what is said online.

“We do need to think critically about what social media reveals to us, and what it hides,” he said.

“Talk to anyone on the ground in Cuba today, and they will tell you frustration and pessimism are widespread.” – AFP

Cuba’s Revolutionary Square got a new name on Google Maps, but it didn’t mention the rebels 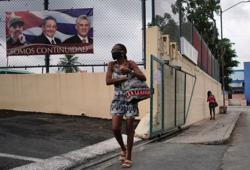