Microsoft Corp is in talks to acquire Discord Inc, a video-game chat community, for more than US$10bil, according to sources. Seen in the context of Nadella’s philosophy about the next phase of cloud innovation, Microsoft’s talks with Discord and its other recent potential targets don’t seem out of band. — Bloomberg

Microsoft Corp’s latest takeover targets have baffled some analysts and investors who are well aware of the company’s spotty track record in consumer businesses and social media. What’s the appeal, they wonder, in digital properties such as TikTok, Pinterest Inc or now Discord Inc, a chat app that’s popular with gamers?

The answer in chief executive officer Satya Nadella’s mind is clear. “Creation, creation, creation – the next 10 years is going to be as much about creation as it is about consumption and about the community around it, so it’s not creating alone,” Nadella said in an interview last month. “If the last 10 years has been about consumption – we’re shopping more, we’re browsing more, we’re binge watching more – there is creation behind every one of those. But I see that phenomenon being much more democratised.”

For Nadella, the next decade of growth in cloud computing and Internet use will be defined not by people watching and buying, but by those who are generating and exchanging their own content in different, thriving groups. Though he wasn’t referring specifically to acquisition strategy, his past purchases and current wish list illustrate that Nadella is eager to control some of the means of production.

Seen in the context of Nadella’s philosophy about the next phase of cloud innovation, Microsoft’s talks with Discord and its other recent potential targets don’t seem out of band. Looking back to his first major deals when he took over at the software giant in 2014, there’s a clear through-line – from the gaming community building worlds and servers on Minecraft to the professional social network and corporate think-posts of LinkedIn to the open-source projects hosted and collaborated on software code-sharing platform GitHub. In the interview, Nadella cited GitHub and LinkedIn as prime examples of those content-creation communities he expects to feature more heavily in the future of the cloud.

Discord, launched in 2015, has attracted more than 100 million monthly users with a free service that offers voice, video and text communications as well as gamer-friendly features, including the ability for users to broadcast the name of the game they are playing. The app became popular a few years ago, rising alongside smash multiplayer hits such as Epic Games Inc’s Fortnite, and has long been a draw for celebrity gamers and social media influencers. Discord’s valuation soared to US$7bil (RM28.92bil) last year, and people familiar with the talks said Microsoft was discussing a deal of more than US$10bil (RM41.31bil). Microsoft and Discord declined to comment.

Social media, meanwhile, has become the virtual way to start a small business or become an entrepreneur from anywhere in the world. Social networks are also realising the value of their biggest creators and their key role in fuelling the parent company’s financial success, with companies from Snap Inc to TikTok to Facebook Inc’s Instagram pouring funds into promoting their stars and helping them make more money.

For Microsoft, owning more creative communities is a chance to sell more cloud software and tools to the platform and its users. Discord specifically can also bolster Microsoft’s Xbox business, where the software maker is focusing more on getting gamers on subscriptions like Game Pass that they can use across consoles, PCs and mobile devices to access a library of titles.

And as more young people grow up with operating systems, email, chat apps and productivity software from companies like Apple and Google, owning a community popular with that age group could acquaint them with Microsoft in a way their elders have been in the past because of Windows and Office.

Still, adding Discord would go a step beyond the programmer and office-worker communities where Microsoft has played for decades. Discord may be a clearer fit in the same way the purchase of Minecraft was, leveraging Microsoft’s 20 years in console gaming and even longer tenure in personal computer games. There’s evidence that Nadella wants to take that step – last year, he was prepared to spend tens of billions of dollars to acquire the US assets of ByteDance Ltd’s TikTok, the viral video-sharing app heavily used by teenagers, also far outside Microsoft’s core software demographic. The company also approached social media platform Pinterest about a purchase. ByteDance chose to pursue a rival TikTok bid from a group led by Oracle Corp, and any talks with Pinterest, which has a market value of more than US$44bil (RM181.78bil), didn’t result in a deal.

“Microsoft buying Discord would be a really strategic move – it shows that Microsoft understands the power of community in the context of the pandemic,” said Christophe Jammet, a managing director at Gather, an innovation consultancy. “While Discord has always been a persistent black sheep in the team/productivity comms space, it’s ubiquitous as a community platform for gamers and myriad sub-cultures.”

Nadella’s focus on bringing new creator communities into the Microsoft fold brings with it twin regulatory risks, around antitrust and content moderation. As US and EU regulators look more closely at the power and influence of big tech, none of the large companies could reasonably expect deals, particularly acquisitions of large content platforms, to pass without considerable scrutiny.

There, at least, Microsoft has some experience, though less so on the content moderation side. Microsoft has had to keep offensive speech and harassment off platforms like Xbox Live and the Mixer game-streaming service it cancelled last year, but it hasn’t really been tested with the speed and volume of a large real-time social platform, where certain kinds of speech and programming could land Microsoft in hot water legally or with regulators. Mixer’s lackluster user numbers were part of why it shut down.

Discord has already been required to confront the kind of content questions being reckoned with by bigger services, like Facebook, Google’s YouTube and Twitter Inc. Discord had to take action to ban Nazi content after white supremacists used the service to plan the 2017 Charlottesville, Virginia, riot where a counter-protestor was killed. Earlier this year, it banned WallStreetBets, the investment group famous for fuelling stock rallies for GameStop Corp and AMC Entertainment Holdings Inc, over hate speech. Discord restored the group after insisting it improve moderation practices.

If Microsoft succeeds in buying the service, Nadella’s community strategy would get a big boost. To make it work, Microsoft will have to take on the difficult role of building up the communities it wants and shutting down the ones it doesn’t. – Bloomberg 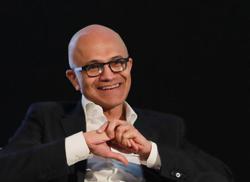