WASHINGTON (Reuters) - The White House has been reaching out to social media companies including Facebook, Twitter and Alphabet Inc's Google about clamping down on COVID misinformation and getting their help to stop it from going viral, a senior administration official said.

President Joe Biden, who has raced to curb the pandemic since taking office, has made inoculating Americans one of his top priorities and called the move "a wartime effort." But tackling public fear about taking the vaccine has emerged as a major impediment for the administration.

Since the onset of the pandemic, calls from lawmakers asking the companies to tackle the spread of COVID misinformation on their platforms have grown.

The White House's direct engagement with the companies to mitigate the challenge has not been previously reported. Biden's chief of staff Ron Klain has previously said the administration will try to work with Silicon Valley on the issue.

"Disinformation that causes vaccine hesitancy is going to be a huge obstacle to getting everyone vaccinated and there are no larger players in that than the social media platforms," said the source, who has direct knowledge of the White House's efforts.

The Biden White House is especially trying to make sure such material "does not start trending on such platforms and become a broader movement," the source said.

The source cited the example of the anti-vaccine protests at Dodger Stadium in Los Angeles in early February, and said the White House wants to stop events like that from happening again.

The protest, organized on Facebook through a page that promotes debunked claims about the coronavirus pandemic, masks and immunization, briefly blocked public access to the stadium - one of the largest vaccination sites in the country, where health authorities are administering more than 8,000 vaccines a day.

The event illustrated the extent to which social media platforms have become a critical organizing tool for movements such as the anti-vaccine drive, that spread misinformation and disinformation.

A growing number of anti-vaccine activists, emboldened by their rising social media following, have helped the movement gain strength in the United States. A report by the Center for Countering Digital Hate in July 2020 found social media accounts held by anti-vaxxers have increased their following by at least 7·8 million people since 2019.

The companies have repeatedly vowed to get rid of such material on their platforms but gaps remain in their enforcement efforts.

On Thursday, Senator Richard Blumenthal criticized the platforms in a tweet for carrying ads that he said funds and promotes "dangerous conspiracy theories, COVID-19 disinformation and malign foreign propaganda."

A Facebook spokeswoman said that the company has reached out to the White House to offer "any assistance we can provide" and has recently announced a new policy to remove COVID and vaccine misinformation along with pages, groups, and accounts that repeatedly spread such material.

A Twitter spokesman said the company is "in regular communication with the White House on a number of critical issues including COVID-19 misinformation."

Alphabet Inc's Google did not comment on engagement with the White House, instead pointing to a company blog on and how it stops misinformation.

The source said the companies "were receptive" as they engaged with the White House. "But it is too soon to say whether or not it translates into lessening the spread of misinformation."

There will be more details on how the White House is engaging with the social media companies on this issue in the "next ten days or so", the source added.

(Reporting by Nandita Bose in Washington, Editing by Chris Sanders and Nick Zieminski) 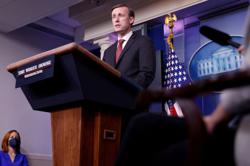