Students are encouraged to take advantage of the nearest Community Internet Centres for facilities to help with learning. — Bernama

IPOH: The Malaysian Community Internet Centre (PIK), which has strong Internet access, is an alternative for parents who cannot afford to provide gadgets or devices for their children to follow home-based teaching and learning (PdPR) from their own home.

A Bernama survey at the PIK in Kampung Tersusun Batu 8 in Tambun here yesterday, found that the initiative by the Ministry of Communications and Multimedia turned out to be the nucleus for students who need computer and Internet facilities.

Its manager, Mazzita Abdul Razak said the centre, which opens from 9am to 6pm every day since 2013, also loans laptop (netbook) for students to use at home.

"This PIK has been the centre for school students, especially with the implementation of PdPR. But since the movement control order (MCO), less students come here as parents are worried about the safety of their children.

"They prefer their children to study at home by borrowing the laptop from the centre,” she said when met by Bernama.

She said the centre has 200 laptops, with about 50% them having been loaned to students and schools.

"We still have more than 100 laptops available for students to borrow," she said, adding that there are about 20 laptops for use at the centre itself, which is also has a meeting room to hold a ‘Zoom Meeting’ session.

She said those keen to use the facilities can visit the centre or call 010 315 3073 for more information or appointment.

A Form Four student of Sekolah Menengah Kebangsaan Ulu Kinta, Che Hafizal Farish, who lives in the village, said he visits the PIK every day to follow PdPR and find references on the Internet.

Che Hafizal said the presence of the centre had indeed benefited students, especially with the outbreak of the Covid-19 which forced schools to be closed.

Meanwhile, a villager there, Rehan Ezanee Ahmad Tajuddin, 36, said she also borrowed a laptop from the centre for her two children, one in Year Three and the other in Form One, to follow the PdPR from their home.

He said although the children, Muhammad Ammar Zihnee Shamsudin, nine, and Nur Alya Ezanee Shamsudin, 13, have smartphones; using the laptop is easier for them to do their school work.

Meanwhile, Perak Youth, Sports, Communications and Multimedia Committee chairman Khairul Shahril Mohamed, when contacted by Bernama, said there are 66 PIKs in the state.

"I call on students who have problems to follow PdPR take advantage of the facilities provided at the PIK nearest to them," he said. – Bernama 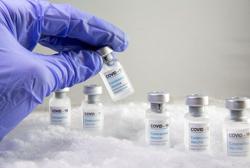