As US hospitals cope with a Covid-19 surge, cyber threats loom

By Marion Renault and Wilson Ring

IT staff help clinical providers set up new computers at the University of Vermont Medical Center in Burlington, Vermont, on Nov 20, 2020. After the Oct 28 attack forced a shutdown of the hospital’s electronic medical records and other key systems, the IT department, with support from the Vermont National Guard’s cyber team, scanned thousands of computers for malware and replaced machines for hospital staff. — University of Vermont Health Network via AP

Then the Internet went down, and the Burlington-based centre’s technical infrastructure with it. Employees lost access to databases, digital health records, scheduling systems and other online tools they rely on for patient care.

In its main laboratory, which runs about 8,000 tests a day, employees printed or hand-wrote results and carried them across facilities to specialists. Outdated, Internet-free technologies experienced a revival.

“We went around and got every fax machine that we could,” said UVM Medical Center chief operating officer Al Gobeille.

The Vermont hospital had fallen prey to a cyberattack, becoming one of the most recent and visible examples of a wave of digital assaults taking US health care providers hostage as Covid-19 cases surge nationwide.

The same day as UVM’s attack, the FBI and two federal agencies warned cybercriminals were ramping up efforts to steal data and disrupt services across the health care sector.

By targeting providers with attacks that scramble and lock up data until victims pay a ransom, hackers can demand thousands or millions of dollars and wreak havoc until they’re paid.

In September, for example, a ransomware attack paralysed a chain of more than 250 US hospitals and clinics. The resulting outages delayed emergency room care and forced staff to restore critical heart rate, blood pressure and oxygen level monitors with ethernet cabling.

Ransomware is also partly to blame for some of the nearly 700 private health information breaches, affecting about 46.6 million people and currently being investigated by the federal government. In the hands of a criminal, a single patient record – rich with details about a person’s finances, insurance and medical history – can sell for upward of US$1,000 (RM4,060) on the black market, experts say.

Over the course of 2020, many hospitals postponed technology upgrades or cybersecurity training that would help protect them from the newest wave of attacks, said health care security consultant Nick Culbertson.

“The amount of chaos that’s just coming to a head here is a real threat,” he said.

Even a small technical disruption can quickly ripple out into patient care when a centre’s capacity is stretched thin, said Vanderbilt University’s Eric Johnson, who studies the health impacts of cyberattacks.

“November has been a month of escalating demands on hospitals,” he said. “There’s no room for error. From a hacker’s perspective, it’s perfect.”

A ‘call to arms’ for hospitals

The day after the Oct 28 cyberattack, 53-year-old Joel Bedard, of Jericho, arrived for a scheduled appointment at the Burlington hospital.

He was able to get in, he said, because his fluid-draining treatment is not high-tech, and is something he’s gotten regularly as he waits for a liver transplant.

“I got through, they took care of me, but man, everything is down,” Bedard said. He said he saw no other patients that day. Much of the medical staff idled, doing crossword puzzles and explaining they were forced to document everything by hand.

“All the students and interns are, like, ‘How did this work back in the day?’” he said.

Since the attack, the Burlington-based hospital network has referred all questions about its technical details to the FBI, which has refused to release any additional information, citing an ongoing criminal investigation. Officials don’t believe any patient suffered immediate harm, or that any personal patient information was compromised.

But more than a month later, the hospital is still recovering.

Some employees were furloughed for weeks until they could return to their regular duties.

Oncologists could not access older patient scans which could help them, for example, compare tumour size over time.

And, until recently, emergency department clinicians could take X-rays of broken bones but couldn’t electronically send the images to radiologists at other sites in the health network.

The tech outage also delayed the reporting of about 50 coronavirus test results to the state, prompting the hospital to revert to a fax system for reporting results until its information technology problems are fixed, UVM Medical Center President Dr Stephen Leffler said Thursday.

Soldiers with the state’s National Guard cyber unit have helped hospital IT workers scour the programming code in hundreds of computers and other devices, line-by-line, to wipe any remaining malicious code that could re-infect the system. Many have been brought back online, but others were replaced entirely.

Col. Christopher Evans said it’s the first time the unit, which was founded about 20 years ago, has been called upon to perform what the guard calls “a real-world” mission. “We have been training for this day for a very long time,” he said.

It could be several more weeks before all the related damage is repaired and the systems are operating normally again, Gobeille said.

“I don’t want to get peoples’ hopes up and be wrong,” he said. “Our folks have been working 24/7. They are getting closer and closer every day.”

It will be a scramble for other health care providers to protect themselves against the growing threat of cyberattacks if they haven’t already, said data security expert Larry Ponemon.

“It’s not like hospital systems need to do something new,” he said. “They just need to do what they should be doing anyway.”

Current industry reports indicate health systems spend only 4% to 7% of their IT budget on cybersecurity, whereas other industries like banking or insurance spend three times as much.

Research by Ponemon’s consulting firm shows only about 15% of health care organisations have adopted the technology, training and procedures necessary to manage and thwart the stream of cyberattacks they face on a regular basis.

“The rest are out there flying with their head down. That number is unacceptable,” Ponemon said. “It’s a pitiful rate.”

And it’s part of why cybercriminals have focused their attention on health care organisations – especially now, as hospitals across the country are coping with a surge of Covid-19 patients, he said. 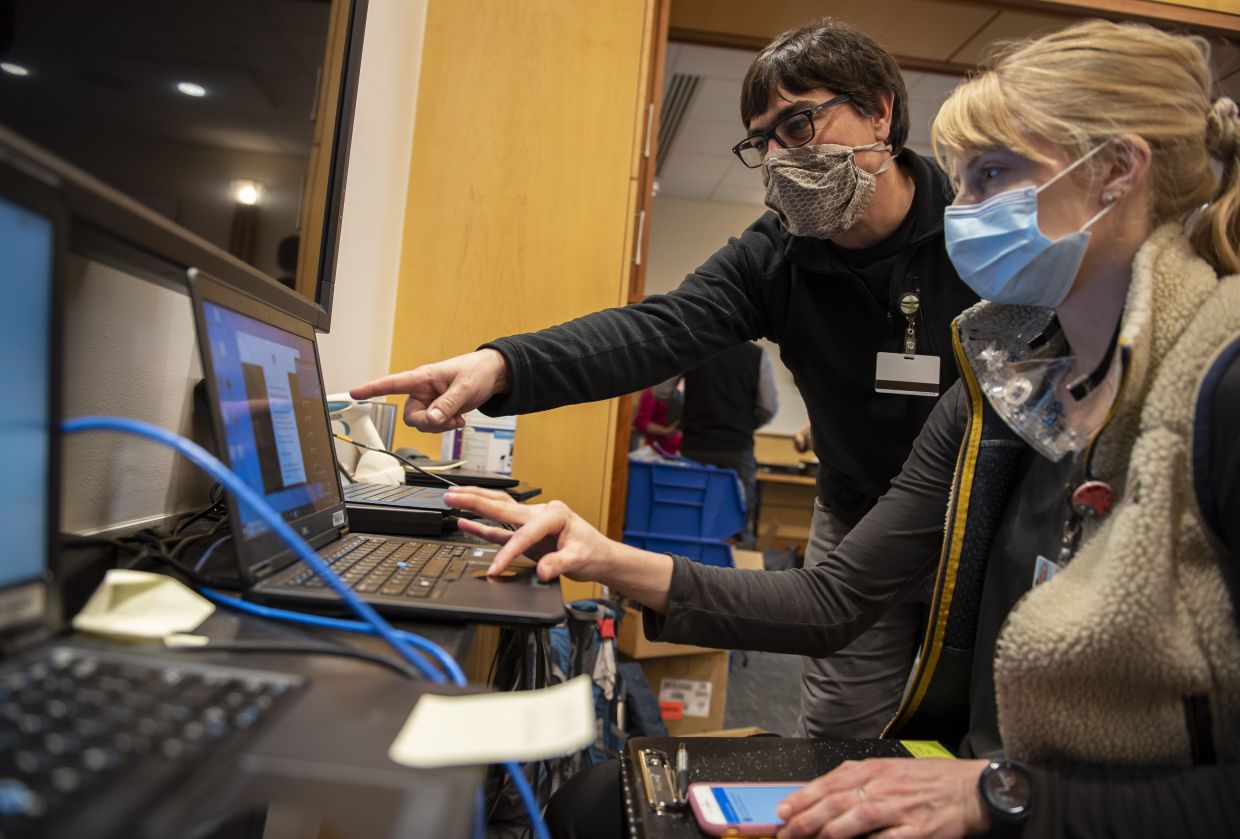 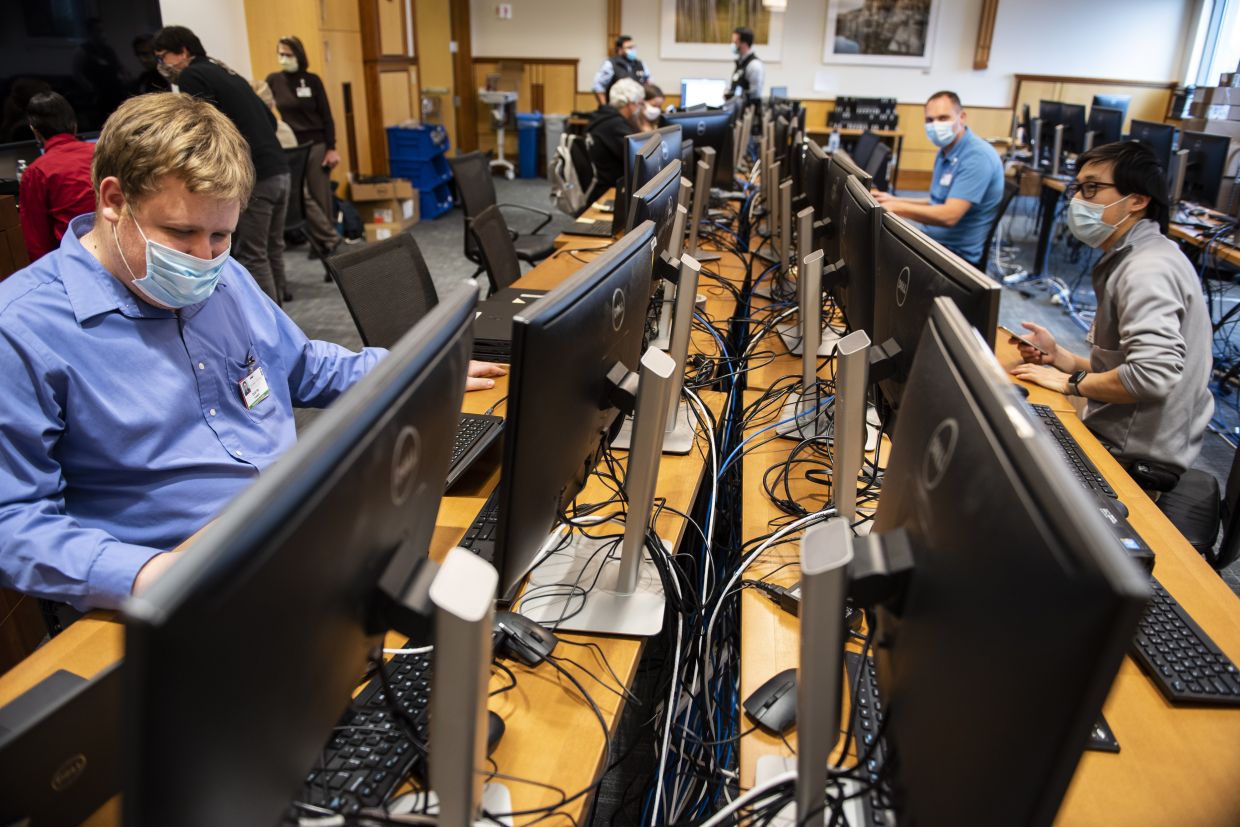 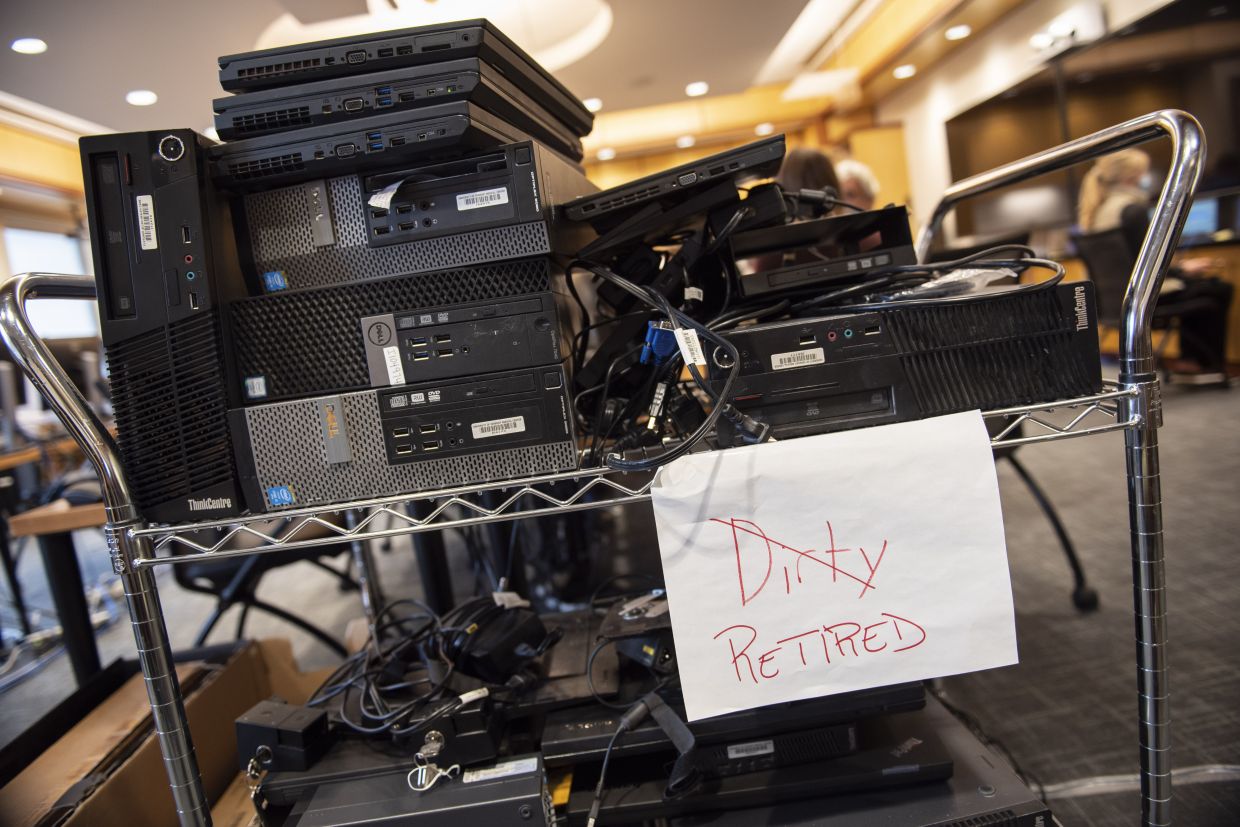 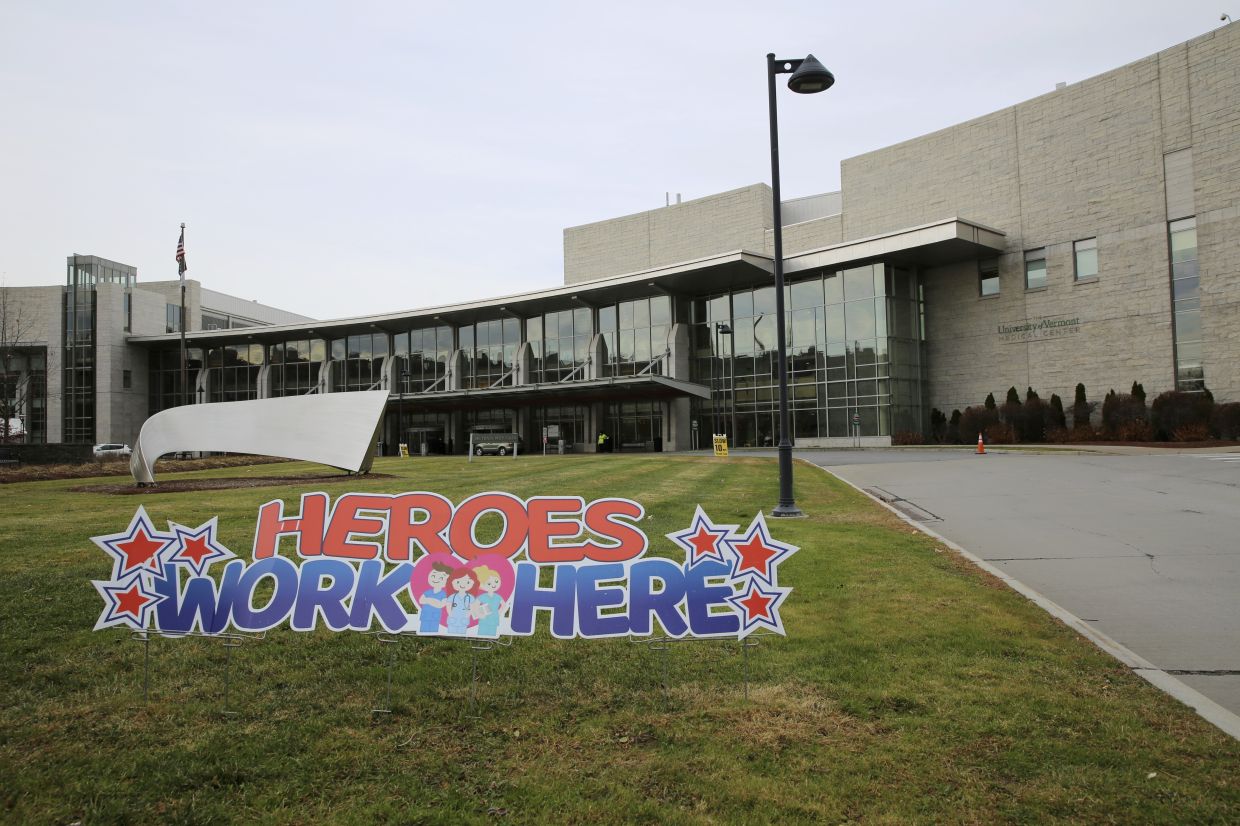 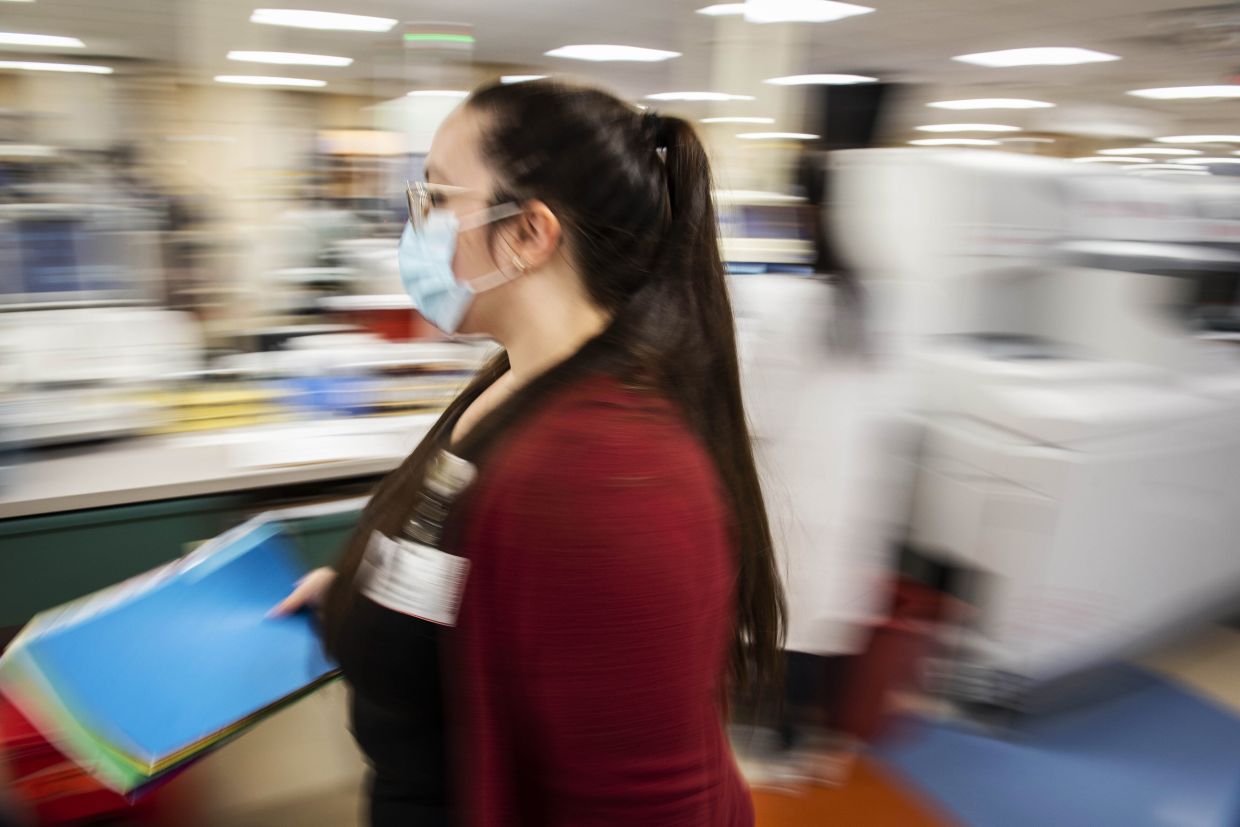 IT staff help clinical providers set up new computers at the University of Vermont Medical Center in Burlington, Vermont, on Nov 20, 2020. After the Oct 28 attack forced a shutdown of the hospital’s electronic medical records and other key systems, the IT department, with support from the Vermont National Guard’s cyber team, scanned thousands of computers for malware and replaced machines for hospital staff. — University of Vermont Health Network via AP

Buses travel through the main campus of the University of Vermont Medical Center, on Nov 20, 2020, in Burlington, Vt. The hospital network is still recovering from a massive digital disruption in October, signaling the dangers of cyberattacks on the nation's health care system during a surge of Covid-19. — AP

A sign in honour of hospital personnel stands outside the main entrance of the University of Vermont Medical Center, in Burlington, Vermont. — AP

A patient account representative at the University of Vermont Medical Center runs paper lab orders on Nov 20, 2020. After the Oct 28, cyberattack, administrators scrambled to keep the hospital operational – cancelling non-urgent appointments, reverting to pen-and-paper record keeping and rerouting some critical care patients to nearby hospitals. — University of Vermont Health Network via AP