VW’s boss warns the troops: we don’t want to end up like Nokia 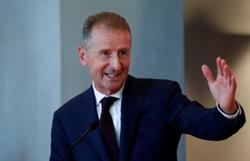 Volkswagen AG is at a critical juncture. It has weathered the pandemic relatively well but is fretting about cases going up again. It has electric cars rolling out but is well behind Tesla Inc. And it has massive manufacturing scale but desperately needs to rethink its vehicles as rolling software devices.

It’s this last issue that Chief Executive Officer Herbert Diess drives home with VW’s more than 635,000 employees. The transition in competencies from industrial might to software prowess will be an immense challenge for automakers that are vast, deliberate and some say ripe for disruption. Car companies that get it wrong risk ending up like Nokia Oyj – failed hardware makers doomed by more nimble and technologically adept upstarts.

"Nokia is probably a good example of how such a change can happen – if you’re not fast enough, you’re not going to survive,” Diess, 62, told Bloomberg at VW headquarters in Wolfsburg, Germany. "I’m always telling our people this example.”

During an almost hour-long virtual event a week before VW’s supervisory board meets for its annual review of spending plans, Diess discussed how he’s readying the company for Covid-19’s next wave, a possible new occupant of the White House and the rise of electric vehicles.

The following excerpts from the interview have been condensed and edited.

How has the pandemic altered VW?

"We are very tense, very concerned all around the world because the cases are increasing again. We are better prepared than for the first wave because we established a lot of testing. For instance, alone here in Wolfsburg, we have test capacity of 2,000 tests per day. So we’re trying, really, if we have cases, to fence everything in. We want to make sure that our people are safe and confident if they come to work.”

How does a Trump presidency or a Biden presidency affect your planning?

"There are different programmes from the Democrats and president Trump’s leadership is different. A Democratic programme probably would be more aligned with our worldwide strategy, which is really to fight climate change, to become electric.

"On the other hand, I would say over the past years we have established a really trustful relationship with the Trump administration and government. We did a lot also to contribute to build America. We are investing a lot.”

How do you keep people within the organisation focused on this transformation when you have all these distractions around them?

"Everybody thinks probably day in and day out about what happens with Covid, but in the long run climate change will be the biggest change mankind is facing and I would say nobody is losing sight. Even with Covid, we’ve seen that there’s more focus on electric cars, on keeping climate change in mind, preparing societies for the change.

"Both themes are in our mind – short term, Covid, and long term, climate change.”

VW is a massive organisation with lots of interests within the company. How do you make Volkswagen more nimble?

"We are facing two transitions: one is a transition in drivetrains – cars becoming electric – and we are prepared for that transition very well. We are building up battery capacities, we are changing entire plants toward electric cars, and we are training our people. For many people, it will be very difficult to decide against an electric car.

"The bigger transition automotive will face is really as the car is becoming more and more of a software device, gathering huge amounts of data, and then building up from the data artificial intelligence, knowledge about the driver, road conditions, safety, and then improving the way this device behaves.

"There’s a decision we have to make: are we becoming the providers of kind of a shell, a body style which then is equipped with a computer from a third party that is running the cars, or are we able to convert this exciting, precious device into a real Internet device?

"These are competencies which we didn’t own before, which we have started building up over the past couple of years but there’s still a long way to go.”

To achieve this, do automakers need their own operating systems?

"We see that probably as the most important race and decisive point for our industry in the next five to 10 years.”

You call Tesla a competitor. Do you see them as a potential partner, as well? You seem to have a fairly friendly relationship with Mr. Musk.

"We think it’s a very important competitor because he’s really pulling the industry. Coming from a software background, he has capabilities which we still have to build up. He’s a reference for us. If we look into our future and what the car has to become, it has to become electric and it has to become an Internet device.

"We also have a few advantages over Tesla. If you drive a Porsche Taycan or e-Tron, you get a different product substance, you get really premium quality. We want to compete with Tesla and try to get close to and, in some areas, probably overtake. When it comes to the battle for market leadership, the race is still open.”

VW’s annual supervisory board meeting where medium-term plans are decided is next week. Are you going to have to reduce investment?

"The pandemic has an influence. There are several million cars missing in our planning, so we have to adapt. But we don’t compromise on our technology roadmap. The investment in software, in autonomous driving will increase. Investment in EVs will increase. But yes, we are putting more pressure on the complexity of our product portfolio. We cannot work in every niche.”

How will you measure success for yourself?

"I think we are the best prepared company for the EV age. Europe will be one of the main hubs of electrification and we are well prepared, so I’m happy. You have to measure a car manager by what’s happening at least three years from now, probably four years – that is what we decide today. I’m quite optimistic that the next two, three years will be very positive years for the Volkswagen group.

"The big thing is managing through that transition. In 2024 and 2025, when cars really become Internet devices and start self-driving, I hope that we took the right decisions.” – Bloomberg 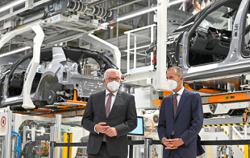 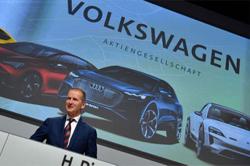