Supporters watch a video of US president Donald Trump while waiting for his arrival at a campaign rally in Lansing, Michigan, United States, on Oct 27. — Chip Somodevilla/Getty Images/AFP

LOS ANGELES: President Donald Trump's campaign website appeared to be temporarily seized on the night of Oct 27 and replaced with a message threatening to expose him and his relatives.

According to the Associated Press, Trump campaign spokesperson Tim Murtaugh said that the website was "defaced" and their camp is working with law enforcement authorities to investigate the source of the hacking.

As shown in a tweet from The New York Times cybersecurity reporter Nicole Perlroth, the hacker wrote in the "About" section of Trump's website that "the world has had enough of the fake news spread daily by President Donald J. Trump," below a title indicating that the site had been seized (https://twitter.com/nicoleperlroth/status/1321231493570547714).

"It's time to allow the world to know truth. Multiple devices were compromised that gave full access to Trump and relatives," the message continues. "Most internal and secret conversations strictly classified information is exposed proving that the Trump gov is involved in the origin of the coronavirus."

Though no evidence was given, the source claimed that they "have evidence that completely discredits Mr. Trump as a president, proving his criminal involvement and cooperation with foreign actors manipulating the 2020 elections."

The brief message ended with: "The US citizens have no choice."

Murtaugh told the Associated Press that "there was no exposure to sensitive data because none of it is actually stored on the site." According to Tech Crunch, it is possible that the hackers were attempting to collect cryptocurrency.

Although it remains unclear just how long this message remained on Trump's website, it has since been restored to its normal state. – Variety.com 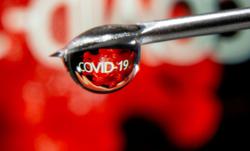