Huawei’s new MateBook 14 has received glowing comments from trusted tech reviewers all around.

Smartphone tech spills over into notebook territory with blazing results

TOUTED as “Best Overall” by reputable digital magazine Tech Advisor, the Huawei MateBook 14 has solidified its position as a dependable if not outstanding laptop to hit the market.

Launched recently, the laptop has made considerable improvements to the design and build, which can be traced back to the first generation, with the FullView Display.

With the Huawei MateBook 14, performance has been dialed up to surpass other ultraportable laptops and with an iconic eye-catching 2K FullView Display, which means its RM3,799 price tag makes it practically a steal.

Finding another laptop with the same specifications at this price is undoubtedly rare, which puts the Huawei MateBook 14 in the running for the best model of the year, yet.

And reasons why, take a deep dive into six reasons that puts Huawei MateBook 14 on a pedestal.

When Huawei first adopted the FullView Display in its own smartphones two years ago, it also extended that technology to its Huawei MateBook X Pro, along with 3K resolution and 91% ultra-high screen-to-body ratio.

Since then, FullView Display is pretty much an integral part element in the notebooks industry today.

In this latest incarnation; the Huawei MateBook 14 is fitted with a 2K FullView Display, which tops the quality screens segment within the same price range.

The width of the left and right frame borders measures merely 4.9mm and realises a "four-sided micro bezel" FullView design, with a screen-to-body ratio of up to 90%, infusing a look of class and quality.

The high contrast ratio of up to 1500:1 also prevents it from appearing gray when viewing pictures or videos.

2. Powered with a high-performance processor

When it comes down to user expectations, ultra-thin, light notebooks aren’t known for their performance.

In fact, they are mostly used by white-collar workers to produce proposals, reports and spreadsheets, using office-based applications suites or at best, only for watching 720P videos.

But for those who demand high graphic processing such as photographers, videographers and even gamers, a powerhouse is needed in order to run, say Adobe graphic suite or fast 3D games.

The reason is down to the unit’s weight and battery life, so to keep it light and yet longer lasting, most ultra-thin notebooks are fitted with low power consumption processors that swap performance for longevity. Most laptop brands will call this their U-series.

High-performance processors mean more consumption, greater heat generation, and are mostly built in the most demanding of portable computers – gaming notebooks. These make up the H-series.

Due to that, high-performance H-series CPUs are not suitable for ultraportable laptops and most manufacturers opt for low-powered U-series CPUs instead.

The Huawei MateBook 14 however, is constructed using an aluminium alloy body design, making it distinctively light at only 1.49kg. The thickest part of the body is about 15.9mm and the finishing is altogether comfortable and elegant to the touch.

The slim architecture of Huawei MateBook 14’s form belies the power that coiled within its interior.

Under the hood, a new AMD Ryzen 4000H high-performance processor is ready to take off.

By leveraging on AMD’s 7nm process and Zen 2 architecture, Huawei MateBook 14 manages to incorporate a H-series processor into an ultraportable notebook, enabling both light and powerful characteristics to occupy the same existence.

This ultra-thin, light model probably sets a new benchmark for other brands to either surpass or follow.

3. AMD performance comparable to a ‘beast’ 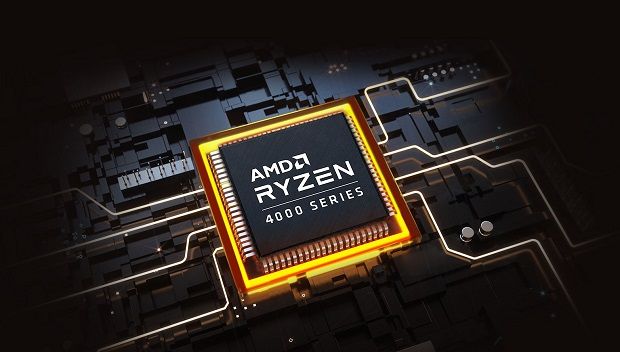 The power behind the machine, AMD’s Ryzen 4000 series.

Before 2017, a large part of the processors market share was dominated by Intel. And although AMD was formed just a year after Intel, the company has been the underdog for many years.

This changed in 2017 with AMD’s launch of the Ryzen processor, which caught up with Intel in terms of architecture, power consumption and performance – at a much affordable price.

From then on, tech bloggers and enthusiasts started to take notice of AMD. Today "AMD Yes!" has become a viral term thanks to AMD fans.

And although both AMD and Intel have comparable performance and their respective products have their own advantages, AMD has an edge with its multi-core, multi-threading platform, which allows professional software to run more efficiently.

This is obvious on software and applications that require extensive rendering, modelling, and coding. In that sense, the AMD Ryzen – with multicore and multithreading – presents distinct advantages.

The Huawei MateBook 14 is configured with either a six-core 12-thread AMD Ryzen 5 4600H processor or an eight-core 16-thread Ryzen 7 4800H processor.

Both are based on AMD’s new 7nm process Renoir (Zen 2) architecture, and both have complete functions.

For example, a 1GB Microsoft Office PowerPoint file takes only 2.5 seconds to open, the Adobe Photoshop Lightroom bulk changes 300 pictures (that’s 7.5GB worth of data to process) in just 2.6 seconds, and for Visual Studio to compile 3.4 million lines of code in only 4min 10secs; the performances are, for a better word "in beast mode".

It is more cost-effective than an Intel i7 processor, for a performance that is somewhat comparable.

In addition to strong performance, this new generation of Huawei MateBook 14 is kitted with a 16GB dual-channel large memory, with up to 512GB PCIe NVMe SSD, which makes opening more software and files easier and stress-free, while providing massive file storage with an online network disk.

Anyone who insists that ultra-light thin notebooks are not good for heat dissipation obviously has not come up close to the Huawei MateBook 14.

To solve the heat dissipation problem Huawei’s solution looks at the main board, which is the source of where heat is largely generated.

It is a learning curve that Huawei has picked up from the heat dissipation technology on mobile phones. By shrinking the motherboard, more space is dedicated to heat dissipation. 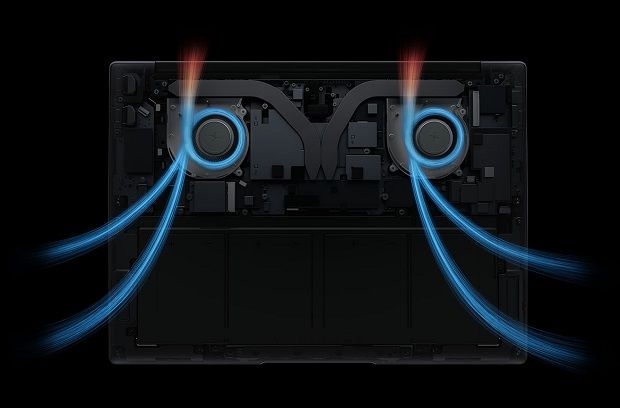 Taking cooling technology from mobile smartphones and adapting them to laptops.

Huawei Matebook 14 produced a new stacking design as its heat dissipation structure and adapted the miniaturisation technology from its mobile phone motherboards to its laptops.

That together with a large air volume due to a larger diameter fan helps the unit achieve a “1+1 >2" heat dissipation effect.

Huawei MateBook 14 is also equipped with an intelligent filtering technology that monitors the temperature of the whole machine in real time through six temperature sensors, to improve fan efficiency.

The noise generated while working on office suite documents is only at 25dB, equivalent to a whisper. The earliest notebooks were born out of the need to fulfil efficient mobile productivity. As technology advances, prices for notebooks tapers, and today, they are not just exclusively for the corporate.

In fact, they are now popular tools for learning and of course entertainment. And that’s how the 16:9 widescreen came about – to match a movie’s ratio so viewers get a better immersive viewing experience.

However, this ratio, when applied to professional, hi-end laptops meant for the office hampers burden for the office staff with higher productivity needs.

Breaking this trend with the 3:2 screen ratio is Microsoft's Surface Book series, which Huawei MateBook 14 has decided to adopt. As Tech Advisor noted, “the extra scrolling space will quickly become your favourite thing about this laptop.”

When working on the laptop, be it for office or school, the horizontal area is not as important as the vertical, as this allows users to access more content on the same screen and reduces excessive scrolling.

“Using the smartphone way of thinking to make laptops" is basically a shift towards better portable computer user experience.

It is Huawei’s innovative attempt in the field of laptops to empower other product lines with the brand's core advantages.

MateBook 14 draws on the idea of mobile phones and provides a touch version to choose from.

This version supports a ten-point touch, and you can simply swipe three fingers to take a screengrab, and then capture specific areas of the screen by drawing shapes.

The laptop automatically recognises any text within the space you've captured, which you can then quickly paste into a document. Capturing and editing screenshots has never been easier.

Under Huawei's unique "multi-screen collaboration" system, users can directly share screens between a mobile phone and the PC, effectively achieving a “one screen to operate two systems" scenario. 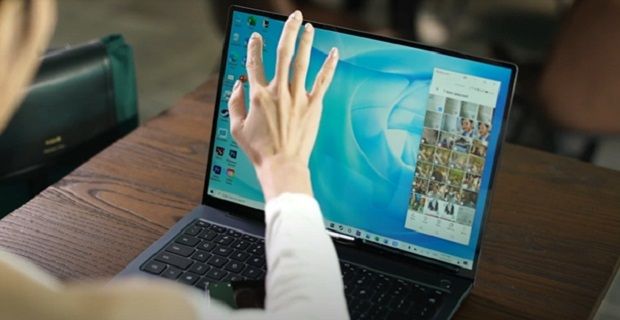 Using the laptop's touchscreen, just drag and drop directly on the screen to transfer files.

The user only needs to focus on one laptop screen, and this lets him handle both professional office tasks on the PC and mobile apps on the phone. He can also open and edit the files directly in the mobile phone using the MateBook and receive mobile audio and video calls.

Huawei’s super-charging has always been an iconic forward-looking technology, one that juices up its mobile phones – and it is a component that the MateBook 14 has also inherited. 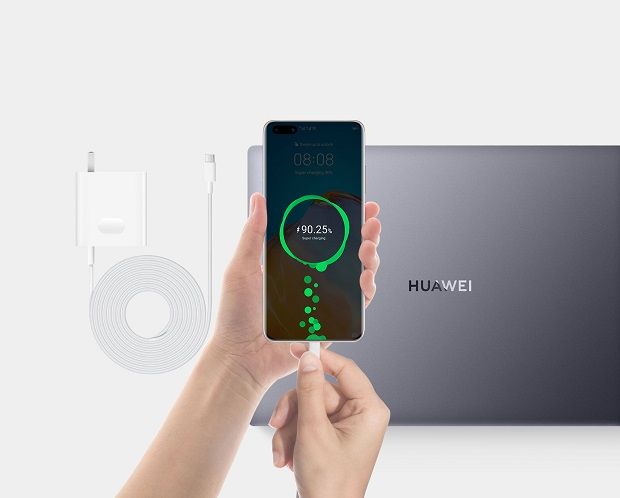 Huawei MateBook 14’s fast charging capabilities was another adoption from its mobile cousins.

The 65W USB-C charger is a powerhouse which weighs just 160g and fits right in your pocket.

It provides fast charging for the Huawei MateBook 14, as well as super-charging for Huawei phones that support Huawei SuperCharge.

A large-capacity battery up to 56Wh, combined with Huawei's smart power saving technology, can be used for 2.5 hours after 15 minutes of fast charging.

Another great feature incorporated into the MateBook 14 is a fingerprint power button that combines safety and convenience, another adaptation from its smartphones to its laptops.

The new MateBook 14 uses a two-in-one design of fingerprint recognition and power button on the Windows system, so you can press the button while the laptop is off and it will boot up, then logs you into Windows without needing you to re-enter your fingerprint again. 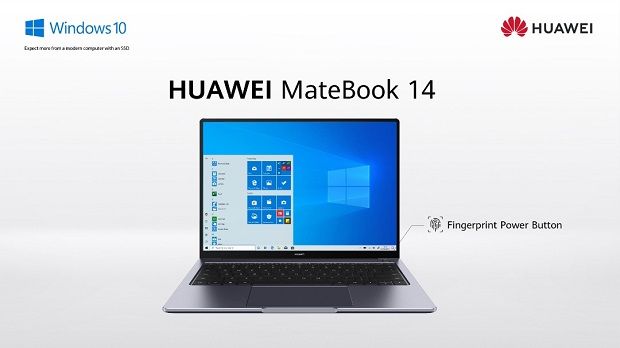 In addition, the full-size backlit keyboard has three levels of backlight adjustments, and further optimises the key travel and keycaps, which enlarges the gesture touchpad area, making input and gesture operations easier to execute.

Huawei MateBook 14 packs a handy array of ports for your earphones, phones, flash drives, and anything else you need, all with the quick convenience of plug-and-play.

Compared to other ultraportable laptops, the Huawei MateBook 14 offers stronger core performance, unbeatable screen quality at its price level, and additional attributes of quality and complete ecology from the perspective of design and craftsmanship.

From now to tomorrow, you can preorder and enjoy free gifts worth up to RM1,177.

Or, if you have a different need, budget or preference for purchasing a notebook, check out the Huawei MateBook Series, which will always have other laptops to meet your goals.

Click on Huawei Online Store to learn more. Pre-order the Huawei MateBook 14 from now till Oct 29 through the HUAWEI Store Pick-Up option, or via these channels - Shopee, Harvey Norman and Senheng.

Don’t miss out on this opportunity! 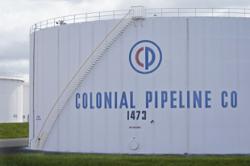