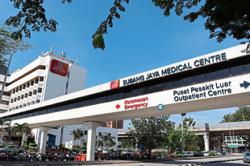 A US startup is growing its fleet of ‘procedural telemedicine’ consoles, a high-end Zoom-like service for the operating room that allows surgeons performing live procedures to collaborate with long-distance viewers following via a tablet or laptop. — AFP

Operating rooms tend to be busy places, often bustling with not just the surgeon, but also a phalanx of aides, students, technical advisers and, yes, medical device sales reps. That’s not exactly an ideal environment for social distancing.

Avail Medsystems, a Palo Alto-based US startup, is promising a better way for managing operating-room crowding in the age of Covid. The company is growing its fleet of “procedural telemedicine” consoles, a high-end Zoom-like service for the operating room that allows surgeons performing live procedures to collaborate with long-distance viewers following via a tablet or laptop.

The Avail console uses mobile overhead cameras to project live images of a procedure up to 30 times their actual size onto an HD monitor. For an idea of what that means, onlookers – both in person and remote – can easily count a patient’s individual eyelashes from six feet off the surgical table, and annotate those images by touchscreen, in real time.

Both medical-device makers and investors are warming up to the product. In Avail’s latest Series B fundraiser, expected to be announced later on Wednesday, billionaire Dan Sundheim’s D1 Capital Partners pumped US$100mil (RM415.80mil) into the medical technology company with participation from technology-focused firms 8VC, and repeat investors Lux Capital, Sonder Capital and others. The vote of confidence from D1, a high-profile fund, comes a few months after Avail closed a US$25mil (RM103.95mil) Series A in March. It installed its first console into a hospital in January.

“In the work from home world, this is the largest industry – medical equipment – in the county that has no work from home capability in any meaningful way,” said Avail chief executive officer Daniel Hawkins. Having the ability for medical device reps to remote in was less urgent until the pandemic struck with full force last winter. Reps are more than just salespeople. Doctors performing operations have come to rely on their expertise and guidance as modern devices become more complex and intricate.

To date, Avail has clinched deals with a dozen large and mid-cap medical-device companies, and has 40 more contracts in the works, according to Hawkins. Avail’s remote link to operating rooms works on a subscription pay-for-use model. The company installs the consoles at no cost. Hospitals, device companies, researchers and anyone else seeking to beam feeds in or out of the operating room are charged for the minutes used. Avail, which leases the consoles from a manufacturer, is selling a package of the equipment and its own software developed specifically for operating room communication.

“We price this so it’s cheaper than to deploy somebody in person,” Hawkins said. “We have tiered rates for the time. One-hundred thousand minutes, a million minutes, and so forth. It’s not at all inconceivable that an Abbott or a J&J would buy 10 million minutes.”

Hawkins, a serial medical tech entrepreneur, got his start at Eli Lilly & Co, and later worked at Intuitive Surgical Inc before launching a series of different companies. In 2012, Hawkins sold his insulin-patch maker Calibra Medical to Johnson & Johnson. His next venture, ShockWave Medical Inc, went public in 2017. Since then, he’d been slowly building out Avail’s business.

Then the pandemic hit.

Most elective surgeries were cancelled in the early days of the pandemic, but stent replacements following a heart attack, surgery after a car accident and some urgent cancer procedures went forward with one key difference: Once-crowded operating rooms were now thinned out. Sales representatives and students were barred as hospitals sought to limit exposure to Covid-19.

“When Covid hit, we had to take a different strategy,” said Dr Bill Nicholson, a cardiologist and the Director for Complex Coronary and Cardiac Intervention at Emory Healthcare. Earlier in the year, he’d used the Avail console to train students on how to perform complex surgeries at various health systems in York, Pennsylvania. But now Nicholson used the technology to create a rotation of surgeons and aides who could come into the OR one week and work from home the next – a model not unlike rotational programmers employed by banks at the beginning of the pandemic.

That’s allowed fewer people to be in the operating room at any given moment. Nicholson is an avid user of the service. Working from home, equipped only with his iPad, he has advised surgeons with lesser experience how to do complicated procedure, such as threading a catheter through a patient’s arm into the heart’s main valve to improve blood flow.

Through his iPad, Nicholson has been able to virtually tap into one of almost 100 consoles that Avail has in hospitals and out-patient surgery centers around the US. At his insistence, Emory Healthcare is installing nine consoles in its facilities next week.The company and its investors are betting the fresh funding round will further propel that number. Within the next year as the company seeks to lease and install as many as 1,000 consoles. Avail will also put capital toward training stakeholders across the medical industry on how to use them, and building out its IT capabilities in order to protect patient information transferred virtually between parties.

Lux Capital Partner Peter Hebert is one of the believers. He first met Hawkins by way of industry titan Fred Moll, the founder of Intuitive Surgical and inventor of the da Vinci Surgical System, the world's top-selling surgical robot. As Moll told Hebert the story of Avail, “It was one of those aha moments,” Hebert said. “All this value is being totally lost and left on the table. It’s clear you can establish a leadership position in the market very quickly.”

Both Hebert and Moll now sit on Avail’s board of directors. The synergies between Moll’s invention and the growing procedural telemedicine services are clear: Just last month, Avail’s platform was used alongside the da Vinci Surgical System to remove a patient’s spleen – the first-ever coupling of the virtual technologies. – Bloomberg