Apple takes a 30% cut of any income they make through the App Store. — Reuters

When Apple Inc opened the App Store in July 2008, it was a US$155bil company selling 12 million iPhones a year. It’s now a nearly US$2 trillion (RM8.37 trillion) company that sells more than 200 million iPhones annually. In the time it took you to read those two sentences, Apple sold 60 handsets.

While the world’s most valuable company has changed, the rules by which it governs the App Store have not. It’s like a 120lbs (54.4kg) Great Dane that still thinks it’s a puppy. It has failed to adapt to the outsized role it plays in the smartphone market. A dispute with the makers of the popular Fortnite game app – alongside new Apple antitrust probes by the European Union and the US Department of Justice – brings that failure into the spotlight.

App developers, such as Fortnite’s owner Epic Games Inc, have two complaints. First, Apple takes a 30% cut of any income they make through the App Store (the fee falls to 15% for subscription-based apps after the first 12 months). Second, the App Store is pretty much the only way to get your product onto an iPhone. So unless you’re giving away your app for free, you have to pay Apple to let it onto devices that run its iOS operating system. Developers call this "the Apple Tax”.

This was less troubling when Apple was the challenger in mobile devices. Nokia sold 468 million cell phones in 2008, almost 40 times as many as Apple. Exerting greater control allowed Apple to create a compelling user experience, and if customers or developers didn’t like it, there were plenty of alternatives. Besides, third-party apps were still a relatively new phenomenon on smartphones. In the pre-4G era, mobile devices hadn’t yet replaced so many of the functions of the personal computer.

Today, Apple has a stranglehold on much of the smartphone market but it insists on the same rules. Its defense is "consistency”. This is a bad argument. It used to be illegal in Britain to harbour a Catholic priest, but rules change when they stop making any sense.

Fed up with handing over so much of their cash to the smartphone operating system owners, Fortnite has manufactured a standoff with Apple and Alphabet Inc’s Google (which operates its own app store for Android devices). The games developer, in which Tencent Holdings Ltd has a 40% stake, says it will stop paying Apple and Google any slice of revenue. The Silicon Valley giants responded, as Epic surely knew they would, by dropping its app from their stores.

Google has been in Europe’s antitrust cross hairs for quite some time now but Apple warrants scrutiny too for the squeeze if puts on independent app developers, as my colleague Tae Kim has written. Facebook Inc, a frequent target of opprobrium from Apple Chief Executive Office Tim Cook, joined in the criticism on Aug 14.

Apple’s refusal to compromise is part of the intransigence that characterises the company, but there’s something else too: It has never encountered a serious antitrust reckoning. Maybe it believes it’s bulletproof.

Just last week, a beta version of its next operating system for mobile and desktop devices demonstrated Apple’s plans to redirect news-story readers clicking on a link on a web browser to its News app, and away from news organisations’ own websites. That seems characteristic of a company that isn’t thinking seriously about whether its behaviour could be deemed anti-competitive.

Apple says its marketplace incurs costs that need to be covered. But if it’s convinced that its App Store store guarantees the best experience, maybe it should let competing stores also operate on its devices. Then users can decide for themselves. Perhaps the best response to accusations of anti-competitiveness is to introduce competition. 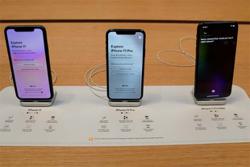