Uber and Lyft have faced several legal challenges over their business models. — Reuters

SAN FRANCISCO: California has filed lawsuits against Uber and Lyft for alleged wage theft by misclassifying their drivers as independent contractors rather than employees, the US Labor Commissioner's Office said Aug 5.

Classifying their drivers as independent contractors "has deprived these workers of a host of legal protections in violation of California labour law," the office said in a statement.

Under a California law that came into effect on Jan 1, workers are considered employees unless they are free from the company's control and perform work outside its usual line of business.

The law challenges the business model of the San Francisco-based rideshare platforms and others which depend on workers taking on "gigs" as independent contractors.

California's lawsuits seek to recover amounts owed to all Uber and Lyft drivers, including nearly 5,000 drivers who have filed claims for owed wages, the Labor Commissioner's Office said.

"This leaves workers without protections such as paid sick leave and reimbursement of drivers' expenses, as well as overtime and minimum wages."

Uber and Lyft each have around 100,000 drivers, the Labor Commissioner's Office said.

Uber has long argued it is merely a platform linking self-employed drivers with riders.

"The vast majority of California drivers want to work independently, and we've already made significant changes to our app to ensure that remains the case under state law," Uber spokesman Davis White said in a statement quoted by the Los Angeles Times.

"When three million Californians are without a job, our leaders should be focused on creating work, not trying to shut down an entire industry."

Uber's core ride-sharing operations have been hit hard by the global pandemic. The firm is due to announce its second-quarter results on Aug 6.

Uber and Lyft have faced several legal challenges over their business models.

In May, California sued both firms alleging they violated a state law by classifying drivers as contractors instead of employees.

The new lawsuits go further by claiming recovery of unpaid wages, penalties and damages for drivers.

DoorDash, a food delivery platform, is also being sued by San Francisco for illegally classifying workers as contractors.

California's state court is expected to rule on Aug 6 on a preliminary injunction compelling Uber and Lyft to reclassify drivers as employees.

Uber, Lyft and DoorDash are backing a ballot initiative in November's election which would classify rideshare drivers and other gig-economy workers as independent contractors. 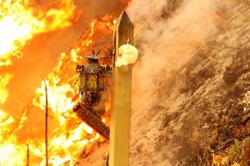