Rose hopes to see some improvements soon, as students like her are expected to adopt e-learning until the end of the year. — ROSE NAWIE ANJAP

Apart from her laptop and notes for e-learning, student Rose Nawie Anjap also has to bring along a parang to hack away the shrubs and bushes to create a comfortable spot to study in the jungle.

"After all, we're in the jungle. The parang is also for my safety," she said to LifestyleTech.

Rose, 24, lives in a longhouse in Pakan, Sarawak, which is four to five hours drive away from capital city Kuching. On June 24, the Universiti Pendidikan Sultan Idris final year student shared a story on Facebook about how she had to venture into the the jungle to get a stable Internet connection for e-learning.

She talked about how she had to wake up early to get into an area in the jungle where her family does rubber tapping. The spot offers a better Internet connection than her longhouse, Rose said, adding that she has a mobile Internet plan with a seven-day validity period.

"I had an online presentation on that day from 9am to 11am. So I sat under a net to avoid mosquito bites. Otherwise I would have to spend a lot of time swatting mosquitoes or scratching myself," she said. 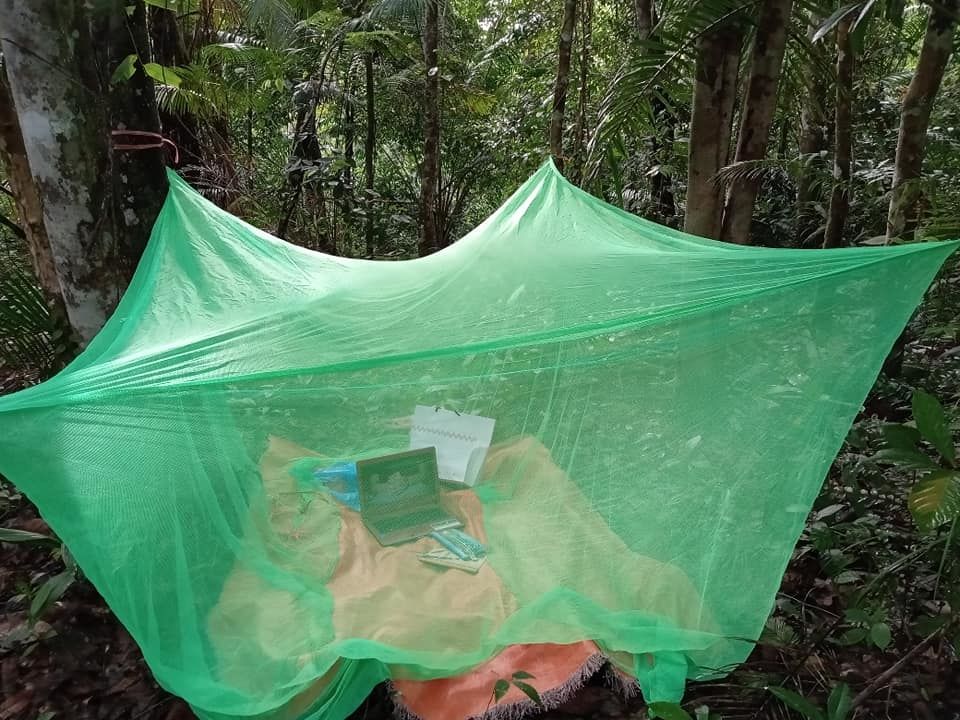 The net is Rose’s only defence against the mosquitoes. — ROSE NAWIE ANJAP

Rose said that she wasn't alone on her first day as her father was close by as she attempted to join another three-hour class that started at 2pm.

"However, I couldn't join the class as it started raining at the time," she said.

She was inspired to share her story after reading about Veveonah Mosibin, a Sabahan student whose YouTube video of staying on top of a tree for a stable Internet connection went viral recently.

By sharing her story, Rose wanted to raise awareness about the struggles that students in rural areas are going through for e-learning and hoped that the situation would improve if her story received attention from the relevant parties. Her Facebook post went viral with over 4,000 shares and received nearly 1,000 comments.

"I didn't expect my story to go viral at such a fast rate. I'm touched by the positive comments. I would like to say thank you to everyone for their kind words and encouragement," she added.

On June 25, the Malaysian Communications and Multimedia Commission (MCMC) released a statement saying that efforts are underway to improve Internet connectivity and service in the rural areas of Sarawak.

"As of now, the plan is to set up 185 new telecommunication towers in Sarawak under the National Fiberisation and Connectivity Plan (NFCP), including seven in Pakan. All the towers are expected to be ready and fully operational by the third quarter of 2021," MCMC said.

The regulatory body stated that apart from uneven terrain, it was difficult to enter the jungle, and the lack of electricity supply also makes it challenging for both MCMC and telcos to build more towers.

"Some of the alternative ways to overcome this issue includes using a satellite network and relying on a diesel-powered generator which, however, can result in unstable coverage," it said.

Rose shared that MCMC visited Pakan on June 26 and informed her that it will make improvements in her area.

"I do hope to see some improvements soon, as students are expected to continue e-learning for a long time. My online classes will continue until December 2020," she said.