Drones and CCTV: surveillance for safety on the sand in Spain

A sign showing areas reserved for adults and families stands on a beach as part of new safety measures in Lloret de Mar on June 22. — AFP Relaxnews

Surveillance is the watchword at the seaside this summer, with Spanish beaches using drones, cameras and coloured tape to ensure safety for tourists holidaying in the shadow of the virus.

Although the pandemic is now well under control, Spanish resorts are gearing up for a summer with a difference, with a host of precautions to keep beachgoers safe.

Over the curve of the bay in the northeastern resort of Lloret de Mar, a drone lazily flies overhead, the eye in the sky keeping a close watch to ensure there's no overcrowding.

The aim, says mayor Jaume Dulset, is to "find the balance between people being comfortable and relaxing while ensuring a safe environment."

At this resort some 70 kilometres (45 miles) up the coast from Barcelona, the town hall has drawn up plans to reassure tourists in the wake of the pandemic which in Spain has claimed more than 28,300 lives.

Always full in summer, its beaches are being partitioned off, with cameras and sensors transmitting real-time information to potential visitors via an app.

With more municipal staff to flag up any non-compliance, they are also using drones that can play recorded messages about social distancing should they spot overcrowding.

There's also a scheme for reserving areas on the sand – which would be easier to manage than a free-for-all – but for now, that won't be activated at this resort which is popular with British and French tourists for its family-friendly atmosphere and vibrant night-life.

For now, only a handful of beachgoers are setting out towels and adjusting sunloungers on this kilometre-long beach which can accommodate up to 15,000 people.

"Normally we would be full by this point but for now, there are very few people so it's easy to respect the security distance," explains 78-year-old Jose María Quicio.

He and his wife Olga, 81, have set up folding chairs a few metres from the shore inside a red cordon roping off space for those over 70.

"This is our area," say his wife after coming back from a dip in the sea.

"It makes you feel safer, it's good, better than before."

About 50 metres away, a lifeguard sits on his watchtower, wearing sunglasses and a fabric mask.

As well as his normal duties, he must also watch for anyone flouting the distancing norms as well as disinfect the toilets and the first aid posts.

"Our first priority is ensuring no one drowns. But from now, we're also helping out with the rest," explains lifeguard coordinator Joel da Silva.

The town hall's plan involved training 8,500 workers in how to ensure health and safety in such places as well as in restaurants, hotels and nightclubs.

"There's a lot of uncertainty but we've done our homework, we are ready for the tourists to arrive and we're waiting for them with open arms," says Dulset.

"We're hoping we can save the season."

Like Lloret, many resorts have developed strategies for avoiding a surfeit of sunbathers along Spain's 8,000 kilometres of shoreline – a refuge for millions of tourists from Spain and beyond.

And the measures are manifold: from sensor-controlled access which can be shut off when capacity is reached, to sections parcelled-off for groups, to banning games taking up too much space or involving a lot of people.

And there's the job of disinfecting sunloungers and parasols.

"The way we go to the beach this year has changed but that doesn't mean we can't enjoy it," says a promotional video for Benidorm, a southeastern resort hugely popular with British tourists.

Its two main beaches have been divided into lots measuring four square metres which beachgoers can reserve through an app.

But the system hasn't yet been used given the lack of visitors to this town that last year counted 16 million overnight stays. — AFP Relaxnews 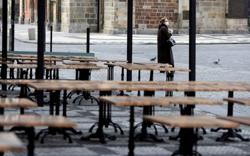