Adam, who used his 3D printer to make drone parts before MCO, now uses it to create face shields for frontliners. — Bernama

Health director-general Datuk Dr Noor Hisham Abdullah said, in a Bernama report last week, that the use of personal protective equipment (PPE) had risen by two to 10 times the normal amount, and that new stock would constantly be needed, as it is one of the disposable items used daily.

Currently, the ministry acquires PPE in bulk by central procurement or at the state level, and donations from non-governmental organisations (NGOs).

Following the influx of donations, Dr Noor thanked the private groups for the PPE they made and welcomed more contributions.

Volunteer Adam Loqman, who is also the Drone Racing Association Malaysia chairman, said he usually uses his 3D printer to make parts for his drones.

When the Covid-19 pandemic worsened, prompting the government to declare the movement control order (MCO) on March 18, Adam decided to make 3D print reusable face masks for his family.

“About a week later my wife showed me an article from overseas about some users 3D printing face shields for medical frontliners because there was a shortage. Seeing this I thought, ‘hey why not put my 3D printers and materials to good use’ by doing the same,” he said. 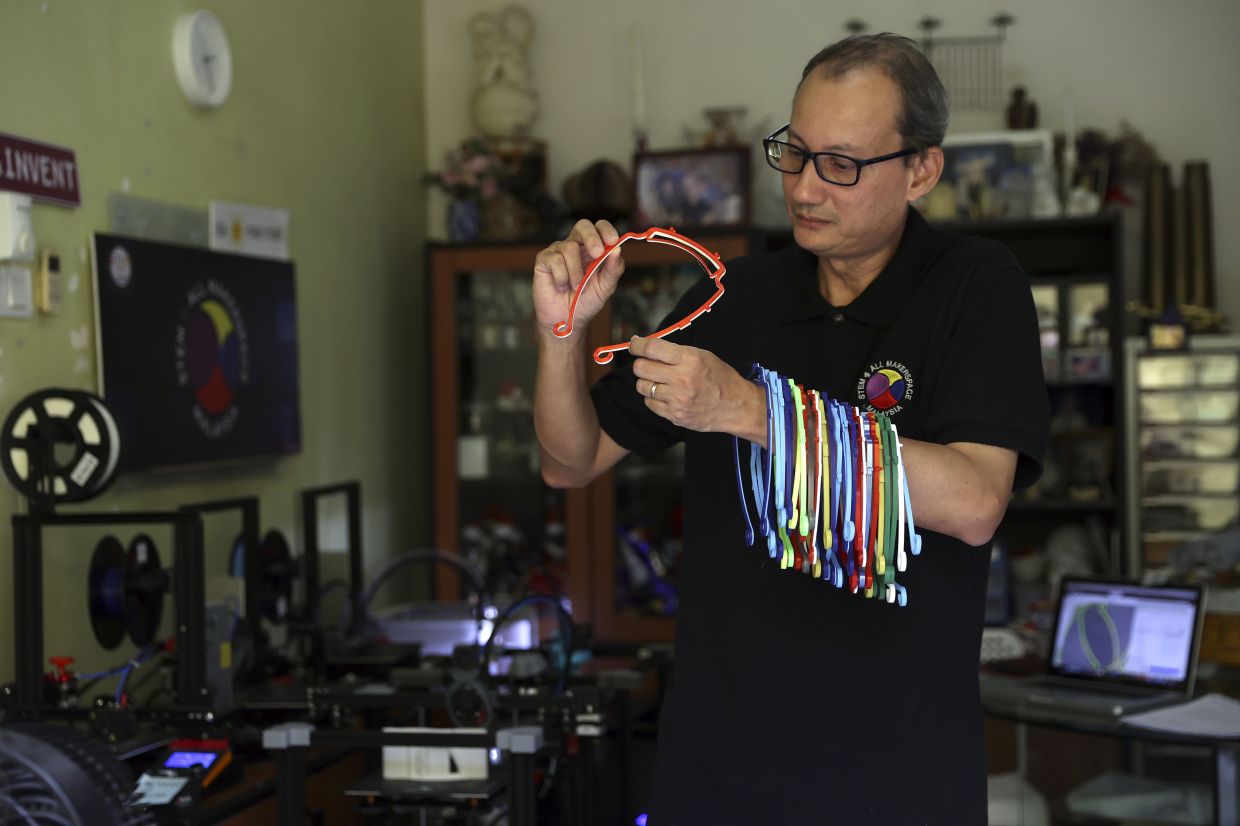 He got in contact with several others in the drone and DIY maker community, including STEM4All Makerspace members William and Daryl Alvisse, and Vishan Nair, who were about to start such an initiative themselves. Collectively, the group of 15 now has about 20 3D printers.

Using their own resources and contributions from family and friends, the group has so far produced and donated about 2,500 units of 3D printed face shields to various hospitals and frontliners.

ICT consultant Samsuri Che Embi said he started looking into 3D printing due to his research into Industrial Revolution 4.0 trends.

He learnt about the requests for PPE by hospitals and the groups that were formed specifically to create safety gear in a local 3D printer Facebook group.

“I love how this group brings people together in a time of need. I think due to the contribution from the 3D community, many Malaysians are proud of the expertise and goodwill of locals,” he said.

He started with a basic face shield and then experimented with valves that transform full-face diving masks into makeshift ventilators, based on what he had read from online.

While he wasn’t working directly with others in the group, Samsuri said he responded to requests on Facebook groups or donated equipment to nearby hospitals. Project manager Khairi Nik Hussain said he also started with helping those just around him, donating gear and even food and drinks to the police and army personnel posted around his housing area.

He later found out about the groups donating to medical staff and decided to ramp up his 3D printing production.

He added that despite the MCO restrictions, the authorities have been really helpful by allowing him to travel so he could deliver the PPE he made.

And the pandemic has taught him that every individual is responsible for those around him or her, and the need for patience and understanding in the current situation.

He is thankful for the frontliners who are facing daily challenges against Covid-19, and hopes they would be encouraged by the efforts of individuals coming together to make PPE.

Covid-19: Volunteers coming together across Malaysia to produce PPE for frontliners