Tencent owed its gains to people like Huang Sihao who, for almost a month, was glued to his smartphone before going back to work. — Reuters

Tencent Holdings Ltd picked up millions of new gamers during the global coronavirus outbreak – yet that surge in mobile play may be slowing as the world’s No. 2 economy goes back to work.

The quest for entertainment among millions confined to home translated into a big boost for Tencent’s marquee games, Honor Of Kings and Peacekeeper Elite. That helped the company gain US$25bil (RM107.56bil) of market value up to March 5, before a global market rout torpedoed the stock along with the rest of the market. WeChat operator Tencent is now expected to report its fastest pace of revenue growth since 2018 when it unveils quarterly results on Wednesday, and investors will look to executives for reassurances it can sustain that pace of topline expansion.

But the March quarter outlook may be less clear-cut than anticipated. While the bread-and-butter Peacekeeper Elite showed strong growth in revenue for February, sales from other major games dwindled sequentially and overall revenue actually fell, according to Sensor Tower data. Tencent’s social and video ad businesses are also expected to take a hit this quarter when merchants and brands tighten their budgets. And any blow to China’s economy will of course pummel the consumer and marketing spending Tencent relies on.

To be sure, Tencent can rely to an extent on cash cows Honor Of Kings and battle royale shooter Peacekeeper Elite to cushion any economic shocks, while awaiting government approval to release potential smashes like Call Of Duty Mobile domestically. Investors also hope many of the first-time users that gravitated toward Tencent’s games will remain once the pandemic subsides.

Tencent’s stock began climbing in February after the outbreak exposed the dichotomy of the world’s second largest tech economy. While virtual denizens like Tencent rode a surge in social media and entertainment, other companies like Alibaba with outsized footprints in the material world struggled to contain the fallout.

Tencent owed its gains to people like Huang Sihao who, for almost a month, was glued to his smartphone before going back to work. For as long as seven hours a day, the 28-year-old Shanghai resident hacked and slashed through the virtual battle arena of Honor Of Kings – until the game’s anti-addiction system eventually booted him. "I had nothing better to do,” he said.

Daily active users on the game have surged 7% to two million players on Chinese iOS devices since late January, while users on its super app WeChat have increased by 1.4 million, according to Apptopia data. Surprise hits included Tencent’s mahjong and poker titles, both of which have replaced the real-world versions played among friends and family.

The pandemic may have also boosted Tencent’s nascent cloud division, which is closing the gap with Alibaba in terms of revenue. Tencent’s two collaborative office apps – Tencent Conference and WeChat Work – rank among the most downloaded free apps on Apple’s iOS Store in China, closely trailing Alibaba’s DingTalk.

In the longer term, the bigger problem may be ByteDance Inc. The world’s largest startup has been luring users and advertisers away to its addictive apps like news aggregator Toutiao and video platform Douyin, TikTok’s Chinese twin. Now, ByteDance is trying to diversify its revenue stream into arenas such as paid music services and full-fledged video games, posing potential threats to Tencent’s online content empire. 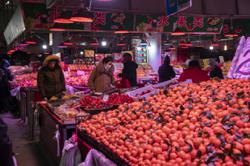